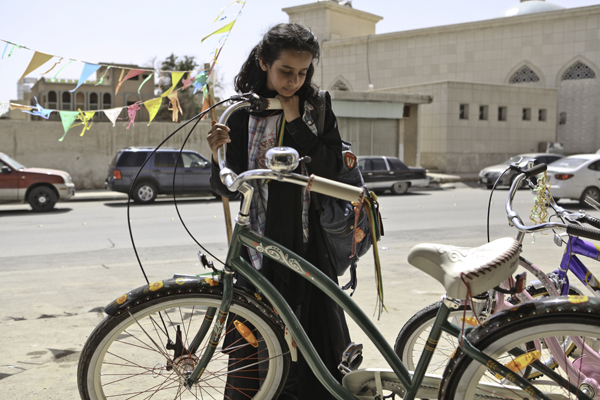 It’s so rare to come across a film that’s genuinely important. Many films are called “important,” but how many actually live up to the label? Wadjda is one such film. In fact, it’s a film that manages to be important simply by existing at all. Haifaa al-Mansour’s film about a young girl who desperately wants to buy a bicycle is the first ever to be shot entirely in Saudi Arabia. What’s more, it’s a film addressing womanhood in Saudi society, directed by a woman.

The real marvel, though, is that Wadjda is a genuinely great film. Clearly inspired by Italian neo-realist films, al-Mansour gives herself the simplest of stories to work with and then elevates it by focusing on intricacies of character and setting. The result is a film that gives its characters’ small battles huge emotional weight.

The central story is about Wadjda (Waad Mohammed), an 11 year-old girl who wants to buy herself a bicycle, but comes up against societal norms telling her she cannot. Her determination won’t be crushed, though, and she does everything in her power to achieve her goal, whether by selling handmade bracelets or trying to win a Koran-recitation contest for the prize money.

Along with the bicycle plot, Wadjda is also forming a relationship of sorts with a young boy, Abdullah (Abdullrahman Algohani). The two are very much best friends, which is especially touching given the social context. Where other boys look down on her, Abdullah genuinely admires Wadjda for her pluck and individuality, personality traits not exactly encouraged by others around them.

Meanwhile, Wadjda’s mother (Reem Abdullah) is going through her own troubles. Her inability to conceive has created problems in her marriage, and her husband is considering taking a second wife. It’s a plot you’d never see in an American film and it’s admittedly difficult to reconcile, but the underlying emotions carry it through powerfully. Here we have the story of a woman who loves her husband and is doing everything in her power to convince him to stay, even if her attempts are likely futile.

al-Mansour populates the rest of the film with characters that live and breathe, always expressing lives beyond the confines of the film at hand. It’s a world in so many ways alien, but through each of these characters we come to understand a lot about it. At the end of the day they’re all people, no different from anywhere else, looking to make it through the day with a sense of dignity and self-respect.

The real highlight of the film is Mohammed, young Wadjda herself. The girl is a natural, creating one of the most compelling and engaging characters on screen this year. It’s practically impossible not to fall for her charms, which stretch well beyond easy directorial choices like the Chuck Taylors she wears. Her journey through the film is a small one, but Mohammed imbues Wadjda with such great wanting that she pulls you in and makes you root for her at every step.

Similarly, al-Mansour’s writing and direction are pitch-perfect. Calm and observational, her camera never judges, instead allowing scenes and characters to exist as whole people with faults and complexities and desires all their own. It would be easy, for example, to turn Wadjda’s father into a kind of villain, but al-Mansour has too much respect for his own wants, needs and pressures to do so. Another example is Wadjda’s principal, who is a hard person in many ways, but has her own plot in the background. She has her own problems and expectations places upon her, always making her actions sadly understandable.

Wadjda is the sort of small movie that packs a huge emotional punch. The film plunges the audience into the world of its characters and lets them breathe, exploring them with all the finesse one could expect of the great character studies. The film also creates an incredible character in the young Wadjda. By the end, the film that most came to mind was The 400 Blows, and much like Truffaut’s film had sequels catching up with its lead character through the decades, it would be wonderful to see how Wadjda grows up and takes on the bigger moments of life. As is, though, Wadjda the smaller moments feel just as important. More impressively, Wadjda transcends “importance” by being something we can all truly celebrate: a wonderful work of art.