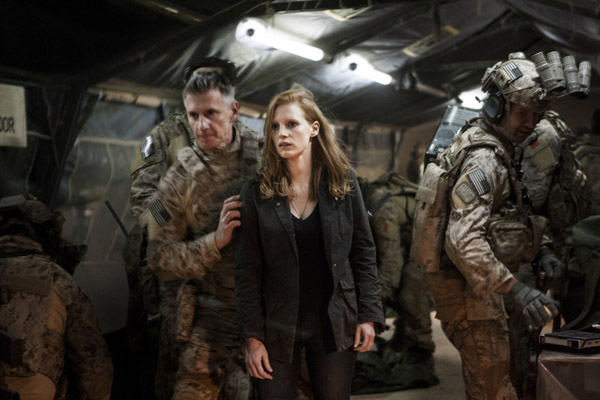 With the already highly lauded and talked about Zero Dark Thirty, Kathryn Bigelow delivers the best film of her career – a directorial effort very unjustly looked over by the Academy Awards – and the most even handed look at modern warfare ever made. While some might say that Bigelow and screenwriter Mark Boal are hedging their bets when it comes to the more hot button details of their topic, almost any argument made either in favour or against the film because the specific moral quandaries are the heart of the matter are immaterial. While it’s probably not entirely factual (and what in this type of movie could be, really?), Bigelow’s “take it or leave it” response carefully deflects cries of jingoism and liberal malarkey with equal parts zeal and thoughfulness. It’s an exploration into an abyss from which there’s no easy entry and no escape once someone finds it all around them. There are no margins. The margins have been erased.

While it has more than three chapters to it’s decade spanning story, the film can almost more easily be defined as a triptych that explores the efforts to track down Osama bin Laden in the days following the 9/11 terrorist attacks. Ominously and briefly starting over a black screen to set the stage while a black box recording from a doomed plane plays, Bigelow and Boal shift their focus to a year later and immediately into the world of the controversial American detainee system of torture and capture. A government cipher named Maya (Jessica Chastain) has been brought into the world of an operative (Jason Clarke) that’s been on the ground in the Middle East for a while and wants out himself. While she never performs the torture, seeing the interrogations is a sadly necessary adjunct to her new job.

In easily the most controversial section of the film, Bigelow gets the nasty stuff out in the open before anything else, forcing the audience into a morally ambiguous stance. She’s not condoning or condemning in any way. She’s forcing the viewer to think about how they actually feel about what they are seeing. Do the two wrongs make a right? Is there necessarily anything to be gained through the same kind of fear? Where is the line? There aren’t any answers, but a whole load of questions proposed that most films and filmmakers wouldn’t have the stomach to ask without offering up a half-hearted explanation in either direction. It’s blunt force filmmaking at its finest.

Following the shuttering of the detainee program, the film shifts into its second act looking at the bureaucracy and the consequences of human error back in Washington as Maya attempts to make sense of everything and follow up on a seemingly impossible lead to track down. Her attempts to get her superiors (Kyle Chandler and Mark Strong as a stooges constantly on the chopping block, James Gandolfini as a head of state, and Clark now finding himself with a cushy desk job) to listen never go the way she wants to, and through some extremely great character development, Bigelow and Boal make what should have been the driest section of the film its most entertaining and emotionally satisfying.

Through clever pacing and smart dialogue, the creative team helps make a nearly three hour film fly by faster than any other lengthy film from the past year. It’s also the section where Chastain firmly asserts herself as an Oscar frontrunner in one of the year’s best lead performances. Instead of merely being about a mission, the film becomes a character study into the awakening of a previously ill defined character. Not much is ever said about Maya’s background and the bits and pieces that come up make her about as mysterious as a pre-Skyfall James Bond was. When she arrives overseas, she’s sheepish and questioning what she’s doing. As her job goes on, she still maintains the same social tendencies as a normal person, but her mousier ways begin to give in to a sense of righteousness that further underlines the film’s admittedly ambiguous stance. Chastain wears the stress on her face and in her mannerisms, but she never really changes who she is until the film’s final third. Rarely do such personal journeys have the time and space to flourish and grow, but it’s wonderful to see filmmakers willing to give this much space to such an excellent leading performance.

In the final section, Bigelow gives the narrative ending to the story by restaging the takedown of bin Laden following a lengthy bureaucratic battle, and while this section of the film suffers from almost hewing too closely to the same playbook Boal created with Black Hawk Down, it makes sense that Maya’s ascension to moving a bunch of pawns around a board in reality rather than trying to make progress in a boardroom has become the ultimate commentary on the state of modern warfare. In the only firm and controversial stance that the film takes, the efforts of one person vastly outweigh the ideas of everyone else who disagreed. The actual extraction offers some visceral thrills and good supporting performances from the likes of Joel Edgerton and Chris Pratt, but the real heart of the otherwise mechanical segment comes from knowing that there’s one person watching and monitoring every move that could have their life ruined if they’re wrong.

It all builds to the most all around satisfying ending to a film from last year. It’s a quiet note of ambiguity and uneasy catharsis. The day has been done, but the war isn’t over. Where is there to go from this point? It’s not something that can easily be answered but the final shots of Zero Dark Thirty linger long after the credits roll, asking a question that’s impossible to answer, nor does it particularly need to be. Such is the self prophesizing nature of warfare.