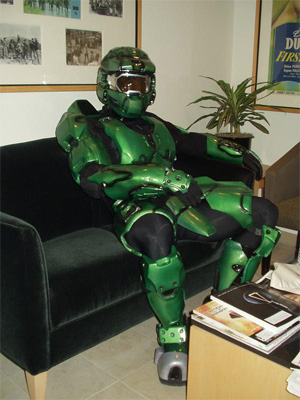 Come on, Chief, quit playing Halo and go get a retiree job.

10. Master Chef: Besides the obvious benefits of being able to merely scratch out the i in his identification, after years of singeing and scorching aliens, I’m sure MC has a nose for quality when it comes to cooked meat.  And who wouldn’t watch the Iron Chef featuring Iron Chef: Eridanus II?  Plus Kitchen Coliseum’s a sweet DM map.

9. Exterminator: If you’ve got swarms of things parading through your house like they own the place, Master Chief Exterminators will panic and fire randomly when they first appear but then settle into a sweeping execution of the annoyance.  This job will also prompt great one liners. For example, the patron might say, “Boy that was the biggest swarm I’ve ever seen” and Master Chief, having fought The Swarm in the far reaches of the galaxy, can reply, “Yo mama’s got an afro with a chin-strap!” which is a total diss.

8. Master’s Swimmer: Anyone can waltz across the galaxy providing onslaught against alien zealots and mutant swarms, but to truly call yourself “Master” you better be able to bring it to the pool for 200, 400, and 800 IM.  Since MC essentially weighs a ton, some sort of switch should be hit to drain the water first, if you kill enough aliens that rush you at the alarm, you can “swim” through their guts to victory.

7. Old Bottle Collector: Okay, this is more of a blanket job for ANY retiree, but collecting old bottles as a “career” has to be the coolest hobo job there is.  Especially if those old bottles are bottles of Night Train, Thunderbird, or the Cisco flavour ‘Red’ as seen on www.bumwine.com.  I bet Master Chief loves old bottles.

6. Online Dating Administrator: You might think Master Chief knows little about the art of dating or building a strong foundation for a relationship, and you’d be right.  His love life would likely spiral into a 10-minute bit on COPS where he tries to explain where all the needles in the wall came from.  That said, interacting with dames like Cortana 24-7 would make him an adept electronic administrator/video pornographer.  Oops, I’ve said too much.

4. Actor: Other than being able to play bikers, basketball players, and that-one-huge-guy-in-so-and-so’s-gang due to his 6’7” 287 lbs stature, Master Chief has not necessarily shown the range to justify this choice of profession.  Master Chief could likely land a role in Red vs. Blue as ‘the green guy,’ but otherwise he may have to wrestle a few roles away from Richard Kiel.  Halo movie?  Yeah, uh, no.

3. School Bus Driver: If playing Halo taught me one thing, it’s that Master Chief is a fully-certified G, B, or M class driver who is excellent at taking turns slowly and carefully, exhibiting full caution when danger appears on the road ahead, and making sure his passengers are all wearing their seat belts.  He would get kids to school safe and sound, making all the stops, and obeying traffic rules.  This is an obvious fit, really, if you’ve even seen him drive a Warthog.  Peaceful.  Serene.  Safe.

2. Evangelical Scientologist: In the real world, outer space and religion rarely go together, but that’s why upon retiring the Scientologists would likely recruit Master Chief using a well-formatted video of Tom Cruise.  His shell shock ramblings like “The Covenant is coming!” and “Death to the forerunners: Moses, Jesus, Pikachu!” would intrigue/terrify locals into taking personality tests and exterminating humans under the genocide mandate of L. Ron Hubbard.

1. Drill Instructor: Master Chief would truly be in his element teaching armies the ancient tactic of hiding in the corner until all the pain goes away and you’re good to go again.