OK, fine. By “your childhood” I mean “my childhood,” but the Super Nintendo’s gold standard role-playing game had enough appeal to have an influence beyond its generation. Final Fantasy VI brought a majesty to video games that has since been overtaken and imitated, but while the stories told by more modern RPGs are deeper and more mature, none can replicate the unique radiance of 1994’s Final Fantasy VI, a game that towers above its contemporaries created the template for modern RPGs. The game’s format and story triumphs are well documented, but here are five smaller details that added to Final Fantasy VI’s luster:

1. Opera Became a Thing: When your heroes get to the Opera House, the whole game changes. What was once dramatic and magical becomes romantic and silly as you scoot about backstage and memorize lyrics to an opera, a subject unfamiliar to most North American gamers of the era. The opera subplot kicks off with Ultros, the always ridiculous squid monster you met in the rapids. Once on stage the scene changes to successfully engage teenagers in a powerful romantic opera. With four movements, including the famous second movement “Aria di Mezzo Carattere,” Celes’s opera is beautiful, a bona fide piece of art that has been performed live numerous times around the world. Final Fantasy VI taught us that sentiment is a universal language as powerful in pixel form as it is in any other medium.

2. Setzer’s Slot Machine: At gambling establishments, big payouts have poor odds and the math sees the house through to profit. A similar algorithm was at work with Setzer’s innate ‘Slot’ ability, which was basically a digital slot machine. Timing was everything, and players quickly learned to execute ‘7-flush’ to avoid summoning the Lagomorph and its limp consolation. The more powerful spells, however, were challenging to nail consistently and teach an important lesson about the perils of gambling: go for the Sun Flare and Summon too often and you’ll end up as broke as if you accidentally left Heiji’s Jitte equipped (it’s the item that made Setzer throw your gil at the enemy instead of running the ‘Slot’ ability). In fact, without plenty of practice, you were better off ignoring ‘Slot’ in favor of something more reliable. It’s the essential lesson of gambling – just walk away or use a genji glove – demonstrated succinctly via Finite math in a high-fantasy combat system. Final Fantasy VI taught us that a consistent sure thing is worth far more than a cavalcade of ‘H-bomb’ near misses. 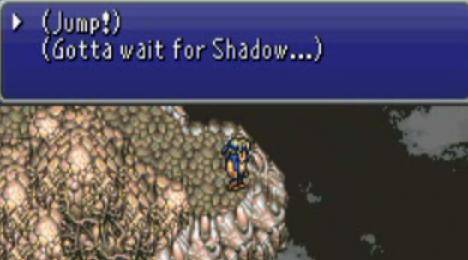 3. Moral Quandaries: Wait or jump? Much has been made of the moral choice players are forced to make midway through Final Fantasy VI, when the game invites you to stick around on a collapsing floating island instead of preserving your own skin and leaping to safety. It was a notable moment for video games since the decision, without warning, decides the fate of a playable character for the remainder of the game. The pressure is on. Phoenix Downs will not help you. No game had ever thrust you into the hot seat like that before, and you didn’t even realize it as it was happening. So you jump. What if I just die and have to fight the Atma Weapon again? Oh, the irony when you find out your rash decision has cost dear Shadow (naturally your coolest party member) his life and you might just have to turn the whole machine off and redo everything after all. What’s important here are the implications of your decision. Final Fantasy VI taught us not to blindly follow parameters just because we expect certain outcomes, but to dare to follow our hearts instead.

4. Destruction as Creation: Halfway through Final Fantasy VI the entire world dies. The floating continent has been destroyed, and so too has the vast majority of the planet. Water has surged into new rivers and oceans and mountains have swerved into new ranges. Neighbors have been driven worlds apart or thrust together regardless of prior topography. Everything old is new again. It’s a radical notion. Final Fantasy VI gave players an understanding of a planet, letting them explore it around the equator or from pole to pole, and then bent it crooked. The world is familiar, but darker, more twisted and sinister. It’s a moment of inspired design, but it is also one of atmosphere. You wander a desert island as Celes for ages, eager to get back into the thick of things, but in the back of your mind you’re still respectful of the cataclysm and the momentous change that has just occurred. Places you knew have been destroyed. Treasures that were unreachable are now accessible. Paths once familiar, rerouted. Destruction as creation – and the recognition that you can now see the world anew – brought a fresh perspective to the second half of the game years before the release of Bioshock. Final Fantasy VI taught us the value of history within a game, and how simple memory can accent a game more beautifully than complexity.

5. The Joys of Pushing Further: The point of Final Fantasy VI was never to defeat Kefka and save the world. It was always to accomplish everything, a trait absent in many modern games (say, Dragon Age), or made so redundant and daunting as to be silly (say, Skyrim). Final Fantasy VI demonstrated the value of side quests for all the right reasons. Instead of saving yet another milliner’s wife from yet another cave, wherein you kill some ice trolls and grab some boots, axes and gold, Final Fantasy VI‘s side quests were each unique in and of themselves. The haunted dreams of Shadow or the downright scary (until you learn the trick) Cultists’ Tower always rewarded you with a one-of-a-kind item you could never get anywhere else. With 14 playable heroes, you never had to wipe away a tear as you unequipped something cool you fought tooth-and-nail to get just because you found something better. These were side missions not of morality, but of character development. Not the mere opportunity to clear a hostile region, but the chance to unravel a scenario’s particular type of challenge. Herein lies the joy of pushing further. It’s the need to complete the game in full, no matter how obscure the location of Gogo, how coincidental the encounter with Chupon, or how many Cactrot need to be put to death before every member of your team knows the spell “Ultima.” Final Fantasy VI taught us not just to follow the story through to completion, but to test ourselves until we became dominant enough to defeat the final form of Kefka in one attack.