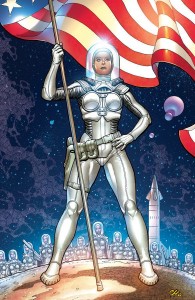 50 Girls 50 doesn’t try to be something it’s not. The title pretty well prepares you for what lies inside, and if this isn’t enough of a clue to what awaits the reader, then keep in mind this is Frank Cho’s new comic. Having taken on writing duties with Doug Murray, Cho turns over illustrating to his new protégée Axel Medellin. This is the latest new series from the very hot-right-now Image Comics, and the level of creator-owned talent they have working with them is just spectacular!

The series was originally announced back in the late summer/fall of 2009, and started with a talent search to find the artist who could best capture Cho and Murray’s vision for this story. Axel Medellin, kinda obviously at this point, was the winner. His other works include Elephantmen, and hailing from Mexico, his style incorporates the best of both American and European comic elements.

What I can’t decide is if I like just how uncannily his art in 50 Girls 50 resembles Cho’s own work. Obviously Axel was chosen and then trained further by Mr. Cho, so one would expect certain similarities. And, all the original character designs were done by Cho – an excellent feature at the end of the first issue showcases their prep work – so again, I understand a closeness when it comes to their visual style. Yet, on my third pass through the first issue, I was struck by just how … exactly the same these two men’s work look to me.

Medellin’s characters, from their body poses to their facial expressions, seem almost too much like Cho’s own work. I’m not sure if this is a complaint, or just an observation. I am a huge Frank Cho fan, so having another artist in the industry that has been trained by this master of comic storytelling is certainly a boon. Then again, if I wanted Frank Cho artwork, I think I want Frank Cho. Over time, I am sure Medellin will come into his own distinct style, and this training with Cho will have forged him into one of the industry’s best artists. For that reason alone, this issue is worth the read.

The storyline itself starts from the premise that mankind has discovered how to travel through wormholes, but that only women are genetically compatible with the experience. So, in an effort to explore the galaxy, 50 of the world’s best women have been sent on this mission of discovery and resource acquisition. If this plot line sounds a little like an excuse to have ladies in very little clothing, heaving their chests as they flee alien monsters, while yet extolling amongst themselves the virtues of being a strong, modern, intelligent woman, you would be correct.

50 Girls 50 was one of the comics discussed on this week’s Panel Culture Podcast at UysFaber.com, and our guest star Own Craig commented repeatedly that this issue felt like a 22-page striptease. A very good, well drawn, fun striptease, but little more than that. I’m not entirely sure I agree with him, but take a listen to the podcast to hear the entire discussion. Personally, this comic is like your favourite chocolate bar: all flavour and no real substance. Then again, with a title like 50 Girls 50, I knew that long before I bought it from the new release rack!