There’s one specific reason to watch A Bigger Splash and it’s Ralph Fiennes. After making a dip into the comedy pool for Wes Anderson and the Coen brothers, Fiennes dives headfirst into a wacky, wild, and downright ridiculous performance that’s an absolute pleasure to watch. The guy who has built a career on keeping things quietly reserved bounces across the brightly coloured frames of the film like a manic cartoon character on fast forward. He’s positively unhinged and clearly revelling in the opportunity to give the type of performance he’s spent years avoiding. In fact, even director Luca Guadagnino seems distracted and intoxicated by Fiennes delighted response to being cast against type and dedicates long passages of the film to simply sitting back and letting the actor dominate the screen. It’s not a bad decision given that the movie surrounding Fienne’s wacko work doesn’t quite live up to it. A Bigger Splash isn’t a bad film or even an uninteresting one. There’s just not much to it beyond pretty pictures and expert acting despite all of the overbearing symbolism and show off filmmaking suggesting otherwise.

A Bigger Splash is based on a 1969 indulgently arty French film entitled La Piscine and sure feels like it. I won’t pretend to have seen the film, but I know the type. A small character piece with lush images and beautiful performers moping and concealing secrets in a cynical critique of the bourgeoisie despite the fact the film is ironically made specifically for that crowd. In this update, Guadagnino reunites with his I Am Love muse Tilda Swinton, playing a Bowie-esque rock star taking a break from her stadium filling career after some vocal surgery that’s left her unable to speak during the healing process (symbolism!). Hunky Euro star of the moment Matthias Schoenaerts plays her soft-spoken boy toy with whom she is luxuriating in a Sicilian vacation home for some nude sunbathing and other forms of naked fun.

That beautiful bubble is burst almost instantly by the arrival of Fiennes, playing Swinton’s former lover and manager. He’s a roving party on wheels, constantly spitting out anecdotes and philosophies while throwing drink and food into his mouth and the mouths of those around him. He also has a mysterious young girl in tow (Dakota Johnson), who he claims to be his recently discovered daughter even though not even he seems to believe it. At that point, the film becomes a hangout picture with a flavour of paranoia to keep things interesting. The movie lounges with the characters as they flirt, poke, and prod at each other. It’s surprisingly rich given that the characters are either eccentrically outrageous or quietly mysterious and watching Fiennes bounce off them all has a certain charm. 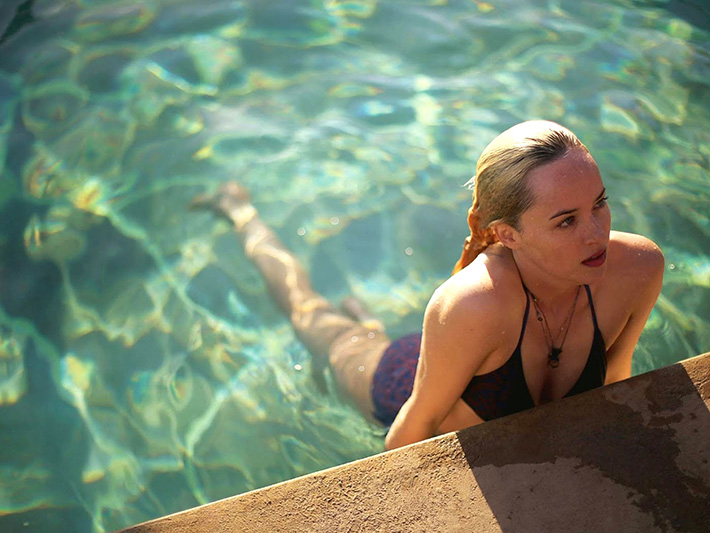 Luca Guadagnino’s camera is frequently as wild as Fiennes performance. The blinding colors of the paradise setting are stimulating enough, but he doubles down on whip pans, flash edits, extended tracking shots, and attention grabbing montages to give a restless visual energy to the somewhat static tale of a limited number of characters exposing secrets and feelings. At times it can feel a bit overblown and overwhelming, but it’s always pretty and generally accentuates the performances rather than distracting from them. Fiennes obviously runs the show, but the other three are no slouches either. Swinton’s mostly robbed of her voice in a way that feels a bit like an acting stunt, but it’s one that works given that her somewhat alien features and exaggerated movements provide incredible expression in contrast to Fiennes verbal gymnastics. She’s fascinating to watch even when doing so little. Ditto Schoenaerts, who is cast to type as a quiet brooding specialist looking for an excuse to explode. The most pleasant surprise on the team is Johnson, whose manipulative mixture of nymphet and femme fatale is a fascinating creation along the sidelines that is both impossible to tear your eyes from and impossible to fully understand.

As a gentle melodrama about four characters slowly picking each other apart, A Bigger Splash works rather well, even if the lazy n’ hazy storytelling style can be a bit trying. But at a certain point plot must take hold and all the bubbling suspenseful atmosphere must translate into drama and resolution. Eventually that leads to thriller territory and while the director certainly has fun stretching his style into suspensful set pieces, something feels a little too arch and false compared to what came before. These sequences work in isolation, but feel a little out of place with the rest of the movie, too laden with symbolic significance and cheap thrills to satisfyingly wrap up all of the set up.

It’s a movie that fizzles out when it intends to conclude with a big bang, but thankfully these are more missteps than failures. Truthfully, it’s in keeping with the type of vintage Euro art house fair that Luca Guadagnino intends to emulate and that section of film history isn’t necessarily to my taste. Still, as lumpy and inconsistent as A Bigger Splash might be, it’s still an effective little lark filled with intrigue, sumptuous visuals, and fascinating performances. It ain’t perfect, but it’s a welcome change of pace in the summer blockbuster marketplace. The fact that Guadagnino and Swinton intend to follow this up with a Suspiria remake is insane. Yet given how faithfully they recreated a more highbrow brand of vintage Eurotrash here, they just might have an interesting take on how to make Dario Argento’s psychedelic pop art horror masterpiece play for contemporary audiences.