For those who got confused when it looked like there were two different Alien films going into production around the same time,  Alien: Covenant is Ridley Scott’s sequel to the prequel that nobody really asked for yet seemed inevitable after the mixed bag that was Prometheus landed in 2012. Yes, it’s hard to believe it’s been five years since Ridley Scott returned to the Alien franchise for a befuddling, Xenomorphless, vaguely philosophical, schlocky prequel that was gorgeous to look at, yet almost impossible to comprehend. For better and worse, Alien: Covenant is none of the above.

This time around our ill fated crew is on ship full of couples (James Franco, Katherine Waterston, Billy Crudup, Carmen Ejogo and many more) carrying embryos from earth on a mission to colonize a remote planet with seemingly ideal living conditions. While en route they receive a transmission from a planet their initial scans overlooked. The ship’s resident redneck (Danny McBride) recognizes the weak signal as someone singing John Denver’s “Take Me Home, Country Roads”, and what’s more, the planet it’s coming from has an even greater chance of habitability than their planned destination. After some debate, they divert their course. They soon discover the remains of the Prometheus ship which had disappeared 15 years prior and it doesn’t take long for this to turn into the worst couples retreat of all time. Apart from a steamy shower scene and characters inevitably losing loved ones, the film never fully capitalizes on the dynamics that would complicate a ship full of breeders. 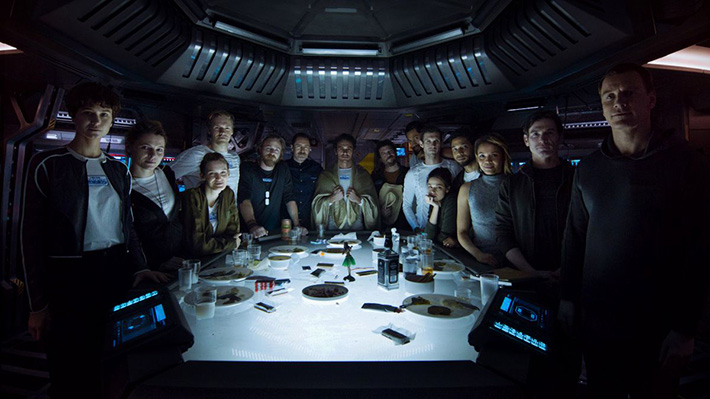 The biggest link between Prometheus and Covenant is also the films’ strongest link: Michael Fassbender. Not only does his eerily synthetic David return in a key role, but Fassbender pulls double duty as Walter, another synthetic who’s had some upgrades (turns out the ability for sentient thought is a bigger liability than it is an asset). After being left to his own devices for 15 years, David has gone from creepy robot to full on mad scientist. The scenes with David and Walter get pretty weird, particularly once a flute enters the picture. Fassbender has said while promoting this film that he’d like to do more comedy, but he certainly gets some laughs here, some that were intended, and others that the audience seemed a little less sure of. On the flip side, we get to see Danny McBride acting more dramatic than ever before, and doing an adequate job of it.

Despite a new wave of Prometheus defenders/ apologists, Scott seems to be addressing many of the complaints fans had about that film, primarily its lack of facehuggers and Xenomorphs. He assumed audiences were over those, but never underestimate people’s desire to see the same shit again and again. While this film attempts to bridge the gap between the beloved franchise and its poorly received prequel, it misses the one thing that people unanimously lauded in Prometheus, which is its brilliant visuals and art direction. Scott employs the same cinematographer (Dariusz Wolski), leading me to believe it was the production designer (Arthur Max) and art department who deserve most of the credit for the look of Prometheus, which was likely also helped by a longer pre-production period.

So Scott has come up with a completely different mixed bag of goods this time around. The story is much more cohesive, we get our old Aliens back along with some new ones, but we’ve lost most of the of the visual panache. In expanding this world, Scott sometimes ventures into scenes that feel like they belong in different Sci-fi franchises, particularly Predator and Terminator, but it’s all in the name of entertainment, and at least on that basic level, Alien: Covenant succeeds.