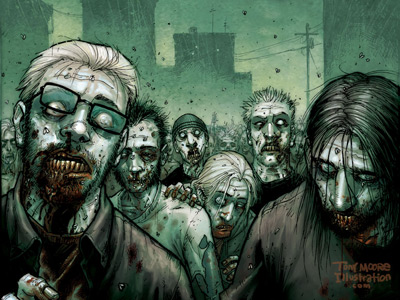 The cable channel AMC is mostly known for playing classic movies, and also for creating the wonderful original shows Mad Men and Breaking Bad.  I’m quite happy with Mad Men — ah Joan — but apparently AMC isn’t satisfied with having two great shows. We’re going to be getting more original programming from AMC soon, in the form of a live action series based on the amazing comic The Walking Dead by Robert Kirkman and Tony Moore.  The Walking Dead follows a group of people struggling to survive after a world wide zombie uprising…  That’s right, AMC is making a zombie apocalypse show!

This would be extremely cool news on its own, but it gets even better.  The series was pitched to AMC by none other than Frank Darabont and Gale Anne Hurd.  Darabont is a talented writer and the man behind such films as The Shawshank Redemption and The Green Mile.  Hurd, who is on board to executive produce The Walking Dead is no stranger to the sci-fi and horror genres; she was James Cameron’s producing partner (and wife) on the Terminator films, Aliens and The Abyss.  More recently she produced the Hulk and Punisher movies for Marvel.  AMC’s got some serious A-list talent involved in this show.  The excellent source material combined with the channel’s commitment to producing quality programming make The Walking Dead a show to look out for.

The Walking Dead is an excellent ongoing comic book series, highly recommended and absolutely worth a read.  Be sure to check out Jeff’s video review of The Walking Dead #60 from a few months back.