Director Viktor Kossakovsky’s new documentary Aquarela isn’t like most other films. He throws standard filmmaking rules out the window to craft something unique. And the end result is indeed something rare; a movie that rocks your heart and your mind in equal measure. Kossakovsky serves up scene after scene of grandiose images and lets them rush over his audience like a frigid evening tide. Aquarela presents cinema in its rawest form, which also makes it a poor fit for those with conventional taste in film.

Aquarela is the Portuguese word for watercolour. And the doc lives up to that title; the movie is all about water. Kossakovsky asks us to sit back and admire water in all its terrifying beauty. The picture takes us across the globe to observe water’s many forms; Russia’s frozen Lake Baikal, Miami Florida (during Hurricane Irma), and Venezuela’s Angel Falls.

The premise is elegant in its simplicity. The camera hangs back and watches for long, unbroken stretches. No voiceover. No talking heads. And no dramatic tension. Depending on your level of patience, this movie is either a meditative slog or a glorious sensory indulgence. I fall into the latter camp. Watching giant thrashing waves, violent tropical storms, and massive icebergs crashing into the ocean is no less epic than seeing Godzilla battle Mothra. 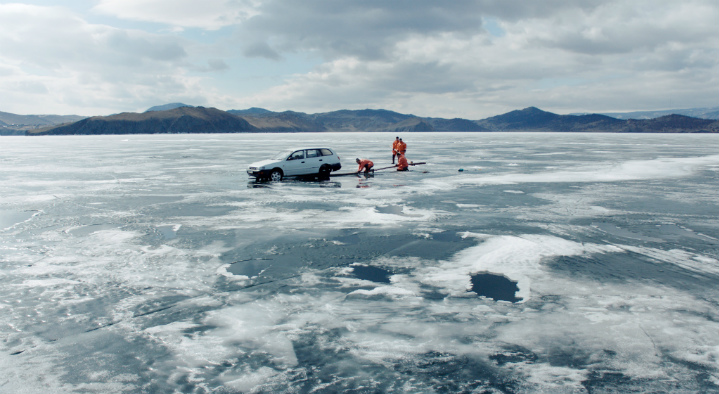 Kossakovsky uses some slick cinematic tools to create a film that overwhelms your senses. My screening of Aquarela was projected at a high framerate – 96 frames per second instead of the standard 24. It’s the same technique Peter Jackson used for his The Hobbit trilogy. The higher framerate makes the on-screen action more fluid. The result is a deceptively vivid experience that, at times, even tricks the brain into thinking you’re looking at the real world.

The movie also utilizes cutting-edge sound design to immerse you into the experience even deeper. Aquarela’s pristine Dolby Atmos acoustics are so crisp that if you close your eyes, you would believe you were in the arctic floating on an iceberg. Every splish and splash from water droplets reverberates around the theatre and pulls you deeper into the experience. The aching sound of glaciers tearing apart and crashing into the ocean left me awe-struck.

Aquarela lacks narration, title cards, and talking heads. There are probably less than a dozen lines of dialogue in the whole movie. So, this doc works best when you bring your own narrative to the table. Kossakovsky lays out 90-minutes of striking images and leaves it up to viewers to fill in the rest. Aquarela is like a cinematic Rorschach test. It’s on you to draw your own conclusion. Is it a masterclass in visual storytelling? A 90-minute slog? A heart-aching meditation on human destruction? Yes, to all three.

There’s a shot where a sky-scrapper-sized glacier overshadows a sailboat as it glides across the frame. The extreme wide-angle view is as grand as the classic shots in David Lean’s epics, and it makes the boat look like as puny and insignificant as a water bug. It’s a theme the doc returns to again and again: humanity is at the mercy of nature’s wrath.

Aquarela puts Mother Earth’s staggering force front and centre, and I left the film with one major takeaway. Regardless of how bad we mess up the environment, Mother Earth will be alright in the long run. She has the power to shake humanity off like fleas. We’re not scrambling to protect the planet; we’re fighting to save ourselves.