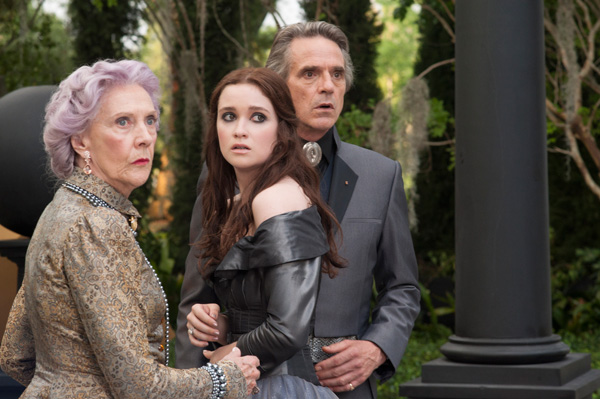 With the rise in popularity of supernatural young adult literature, it’s no surprise that Hollywood (and like an Ouroboros eating its own tail, the literary world) would attempt to cash in on the trend. Richard LaGravenese’s Beautiful Creatures is based upon the 2009 novel of the same name by Kami Garcia and Margaret Stohl and is the first in a series set in fictional Gatlin, South Carolina. Like other adaptations of popular young adult series, the Castor Chronicles’ built-in fan base should ensure a modest opening for Warner Bros., but the first film in this series doesn’t fully prove that it deserves a follow-up.

The film follows 16-year old Ethan Wate (Alden Ehrenreich) who dives into the world of “banned” literature such as Slaughterhouse-Five and Tropic of Cancer as a way to escape his small town. Gatlin is typical of a handful of small towns across America – where there are no Starbucks and the local movie theatre only gets films after they’ve arrived on home video – and like more than several small towns across America it’s deeply religious. After being haunted by dreams of a mysterious girl on a civil war battlefield, Ethan finds himself starting a new school with a new classmate – Lena Duchannes (Alice Englert). Spoiler alert, Lena is the girl in Ethan’s dreams. Rejected by her peers for being related to and living with the town “boogeyman”, Lena’s reclusive lifestyle is driven home through the introduction of To Kill A Mockingbird to the year’s curriculum, despite being among several titles on the local church’s “banned” list. After offering Lena a ride home when she’s stranded in the rain, Lena introduces yet another literary figure – Charles Bukowski, whose poem The Way It Is Now inspired the original novel’s name. If there’s only one thing teens take away from the film Beautiful Creatures, it will hopefully be an interest in seeking out the works name dropped by Ethan and Lena.

However, the budding romance cannot last as Ethan is but a mere mortal and Lena is a “Caster” – a gender neutral term that replaces witch or wizard. Lena has returned to Gatlin to be with her family as she approaches her sixteenth birthday, when she will claimed for either Light or Dark. The three relatives of Lena the film spend time trying to flesh out have all been claimed by the Dark – Macon Ravenwood (Jeremy Irons), Ridley Duchannes (Emmy Rossum) and the “darkest” of the Dark Casters, Sarafine (Emma Thompson). While Macon attempts to keep his Dark nature under control to allow Lena to be claimed by the Light, Ridley and Sarafine attempt to seduce Lena to the Dark. The film sets up the Claiming as a revelation of one’s “true nature”, meaning that Lena’s fate has “already been decided”, which should tip the audience off to themes of free will versus determinism. Will Lena be claimed by the Dark? Well, this is the first in a planned series, so you’ve probably already figured it out.

Also rounding out the cast is Viola Davis as Amma, whose character takes on the dual role as the local librarian who is also Ethan’s housekeeper. And because there needs to be an all-knowing mystical guide who moves the plot forward via sage advice and exposition, Amma is also a “Seer” who manages the Caster library that lies below the Mortal library.

The film starts off interestingly enough, through some funny side-gags (the local movie theatre can be seen showing two other Warner Bros. films with hilariously skewed titles) and small demonstrations of what Casters can do (during their first meeting, Macon forces Ethan to outline his future, which is equal parts funny and depressing). But about two thirds of the way into the film, the pacing hits a brick wall at a dreaded library montage sequence. When setting up your film as a fantasy with magical elements, it’s important to maintain audience interest by demonstrating how powerful your magical characters can be. By far the most interesting battle of powers in the film comes when Lena faces off against Ridley during a family dinner, but once you realize the battle is just the two of them making the dinner table spin around, the motion sickness sets in and you’d prefer it to just stop. An anticlimactic ending, obviously set-up to allow the introduction for the planned sequel, will likely leave the audience wishing LaGravenese had injected more movie magic into the film in order to remain memorable against the flurry of oncoming films competing to be the next Harry Potter.