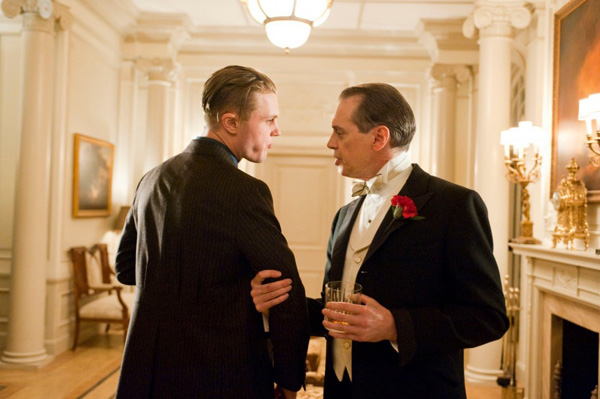 Boardwalk Empire – the star-studded prohibition era drama from HBO – returned to our television screens with a bang this past weekend. The show seems to have found its footing right out of the gate, and is at its well-acted, violent, multi-faceted best in this season’s opening episode – titled “21” for the year portrayed (1921).

When last season closed, Nucky Thompson (Steve Buscemi) had just won the re-election for his party and superficially seemed to have consolidated his hold on booze distribution and political power in Atlantic City. However, a re-invigorated former boss – the Commodore (Dabney Coleman) – had enlisted Nucky’s brother Eli (Shea Whigham) and his protege Jimmy (Michael Pitt) in a conspiracy to overthrow Nucky. In this season’s first episode, the Commodore and his cronies make their first moves to attack Nucky’s lucrative position of power.

The show opens with a visually appealing montage, set to some of those gorgeous, brassy 1920s tunes that the series utilized liberally throughout its first 13 episodes. We catch up with half-faced Richard Harrow (Jack Huston) and Jimmy – who have clearly professionalized their bootlegging operations – importing a large amount of booze at Nucky’s behest for sale to Chalky White (Michael K Williams). Nucky imbibes spirits with his Ward Bosses as they gamble and enjoy the company of show-girls. Van Alden (Michael Shannon) picks up his wife at the train station, Eli is shown to be healing from the gunshot wound he suffered late last season and Margaret (Kelly McDonald) looks wistfully at Nucky’s empty space in their marital bed. The Commodore – in contrast to Nucky’s carefree gallivanting – is practising his spear-work in his extravagant den. It’s a weird shot, but the Commodore is a weird dude – and it serves to convey the old man’s focus and aggression. The montage serves to situate and misdirect the audience into an apparent calm before the storm – before the episode hits us with an outburst of blood and gun play.

Shortly after Jimmy’s delivery to Chalky White, the warehouse where Chalky waters the liqour down is shot up by a group of four Klansmen armed with shotguns and a mounted chain gun. They slaughter five occupants of the warehouse (and one woman, who saves Chalky’s life) in the name of “Purity, Sobriety and the White Christian’s Jesus.” Michael K Williams, who we interviewed about the show this week, has a tremendous acting moment – his traumatized facial expression, and the stylized manner in which the camera zooms in on it is haunting.

The community’s reaction to the shooting is telling – it’s a big deal that Chalky shot a white man, but the five black warehouse workers who died barely register. Nucky, of course, is indifferent to racial politics and plays both sides; speaking of the evils of the Klan in a black church, before condemning the “obstreperous negro” to white parishioners in a different church. Politics was a good deal easier before YouTube, I can tell you. The shot that seamlessly transitions from one church to the other is clever, and underscores Nucky’s overwhelming political apathy. In any event, the trauma and Nucky’s apathetic reaction to it causes Chalky to close up shop – which is exactly what the Commodore (who unleashed the KKK on Chalky’s men) was hoping to achieve.

Nucky’s awareness of the growing plot against him becomes complete at the funeral of the shot Klansmen when Jimmy shows up. Though Jimmy claims to be there because the deceased klansmen is “a former teacher,” Nucky is wise to what’s happening. He feebly warns Jimmy of the Commodore’s duplicity, and a glance inside at a town elder confirms his suspicions. As the episode concludes Nucky is arrested for election fraud, and – though it’s not clear yet – we can safely assume that the Commodore has had a hand in bringing these charges against his rival.

Though the Commodore’s first moves against Nucky drive the plot forward in the season opener, the driving thematic force is the interplay between fathers and their sons. We’ve got Teddy, Margaret’s son – who is misbehaving at school, and playing with matches – in need of fatherly guidance. Jimmy – whose kids, he tells Nucky, are “nearly old enough to shave” – takes his son seagull hunting, something he used to do with Nucky. In contrast to the hunting Jimmy did with Nuck (his adoptive father figure), his natural father the Commodore clearly never had time to take Jimmy shooting – though he brags of his exploits to Jimmy while showing off his own, impressive collection of trophies.

In the episode’s final scene, Jimmy stores Nucky’s wedding gift, a statue of a man and his boy, hunting in the woods, in a place of dishonour while Margaret and her children watch Charlie Chaplin’s The Kid at a theatre. The Kid was Chaplin’s 1921 full-length comedy feature about a tramp who adopts a boy from a poor woman, who soon becomes a famous actress. In the film, Chaplin’s tramp mentors the child in petty crime, and comes to love the boy, before losing the child at the end of the film. Van Patten – of course – makes sure to select the most domestic of the silent film’s scenes to accompany the action in the theatre. Taken together, the two images convey a father’s estrangement from his son – which is the primary emotional conflict in the episode. Jimmy is choosing his natural parents, his mother who very weirdly admits to “kissing his winky” when she would change change his diapers – and his control freak father – and he’s chosen to betray the man who has loved and raised him.

In the episode’s main side-plot, Mrs. Van Alden has come to visit her twisted husband Nelson, who, for my money, remains the show’s most engaging character. Nelson is increasingly in a dark space – he has given into the temptation of Atlantic City or “Soddom by the sea.” His new G-men, Clarkson and Zewicki, gift his wife a seemingly religious pamphlet “If Jesus Ever Came to Atlantic City” that turns out to be a list of brothels and taverns. “It’s the author’s attempt at cynicism,” Nelson assures his wife, though the pamphlet is just another metaphor for the personal corruption eating at Van Alden.

The raid scene in the restaurant is great fun, as Nelson takes some time out from his engagement dinner to beat up the waiter and raid the establishment. Nelson doesn’t seem to have any plans to raid the joint until his wife urges him to do so, and afterwards he notices a bar-back carrying a crate filled with contraband. When he does raid the place, it serves two selfish purposes for Van Alden – it inflames his wife, and allows him to procure the restaurant’s cash in hand to pay-off Lucy who is carrying his child.

The directors clearly love to poke fun at Van Alden and the shot where they transition from Van Alden’s wife, clearly turned on by Van Alden’s lawman outburst, to the bouncing springs at the Hotel Metropole, is a clever stylistic flourish. When Van Alden then turns out the lights before engaging in some godly, marital sex? Well ,that’s the cherry on top.

The season opener has set the table for what I’m expecting to be a significantly stronger season than Boardwalk Empire‘s first go-around. While Boardwalk suffered from some growing pains through its first five or six episodes, it picked up steam in the latter half of last season, and that seems to be carrying through. Nucky is in a precarious bind now: he’s lost his warehouse, and a giant shipment of booze; he must contend with betrayals from a brother, and a son; and he’s got a significant legal problem on his hands. Clearly the stage is set for a serious Hardeen escape artist act, an act that we can expect to include a significant dose of violence, nudity and all that good stuff we love from HBO.