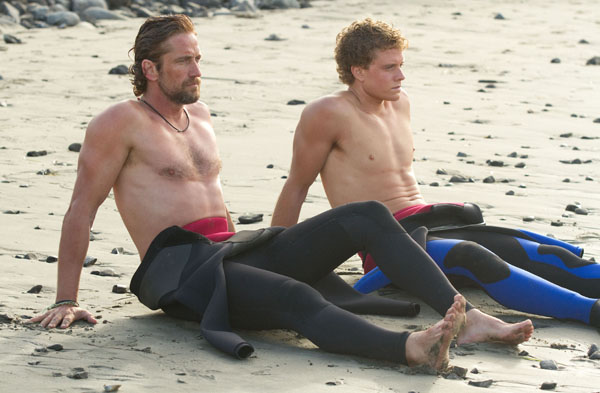 I don’t know if any of you out there have ever met a real, true, honest brah before, but if you have and you got him on a day when he was either sober or high enough to talk about surfing, he probably mentioned that it’s like life, man. The waves, you gotta ride ‘em, you know? You take what the ocean provides carve your own gnarly path. Kind of like how life throw all of the challenges at you and you’ve got to ride what you’re given and can’t miss the most totally awesome opportunities when they come your way or something. If you haven’t been fortunate enough to have someone in a wet suit explain that slice of stoner philosophy then you should be thrilled to hear that the new movie Chasing Mavericks lays it out in the true story of young surfer Jay Moriarty who rode life like a wave and lived it, man. He really lived it.

Even though the film comes from a true story, the script comes straight out of a screenwriting 101 class. We meet Jay as a child, so obsessed with the ocean (and a girl…awwwww) that he counts the beats between the waves and predicts when the gnarliest ones are on their way. One day he stumbles into the water and is rescued by Frosty (Gerald Butler) a grown man and surfing guru who lives up the street. Jay’s father also leaves him and his mother (Elizabeth Shue) on the same day and unsurprisingly he pulls together a surfboard with glue and duct tape and hits the beach. You’re not supposed to be able to stand your first time out without any lessons, but the kid’s a natural. Flash-forward a few years and Jay is a teenager and a surfing prodigy cutting around all the lame bullies on the waves. Frosty watches from afar and is impressed. What he doesn’t know is that Jay is also watching him and one morning follows him out to a secret location where legendary 30-foot monster waves (called mavericks) crash.

Jay knows he’s got to ride those monsters and knows Frosty is the only man/father figure who can show him the way. He manages to sweet talk Frosty into training him to ride a maverick before the maverick season ends in 12 weeks. However, on the first lesson Frosty lays it out for the little man. Surfing is like life and if he’s going to learn how to conquer the big wave, he’s going to have to learn how to conquer his physical, mental, and emotional limitations and fears. So school is in session and while Jay is becoming like the radest teen surfer ever, he finds the inner strength necessary to help his deadbeat mom keep a job, get his friend off drugs, stand up to bullies, and get that girl down the street he’s been eyeing up even before puberty made him feel funny in the pants. But that’s not all, you see Frosty may know surfing and life, but he’s struggling in many ways, like say as a responsible father. Do you think that maybe, just maybe Jay will like totally teach Frosty as well? Spoiler alert: yes, yes he will.

So…yeah, that’s the story, but you probably worked that out already after seeing the trailer or even just staring at the poster long enough. It’s a pretty rough concoction of coming-of-age clichés and bonehead philosophy that never ceases to shove stinky cheese up the audience’s nose. That makes it all the more surprising that the movie comes from director Curtis Hanson, who even managed as a middle aged white man to connect with Eminem’s underground rap story 8 Mile and turn that into a credible movie. In Chasing Mavericks, he’s clearly got nothing that can be transformed into a reliable narrative. It’s just the same ol’ BS you’ve seen in 1000s of these movies before. Then again there’s a second director credited in Michael Apted, and while IMDB claims Apted took over when Hanson left for health reasons, it’s more likely that happened when Hanson left because he either couldn’t or wasn’t allowed to turn the project into something resembling a passable movie.

Chasing Mavericks also stumbles through its obvious plot mechanics awkwardly. There’s not a scene that doesn’t feel truncated or incomplete and entire plotlines seem to disappear or get resolved off screen. Chances are there was a 3+ hour cut of Chasing Mavericks at one point and while that version might have been remotely satisfying, the thing is tough enough to get through at two hours that whatever was lost was clearly worth it. The actors were all harmed by the cuts though, with none of the supporting kids (even the love interest) getting much of an arc and coming off like Disney channel heroes and villains. Elizabeth Shue continues he sad streak as one of the most wasted talents in Hollywood with another thankless role that she almost makes work despite having nothing to do (seriously, when is she going to get an actual character to play again?). Gerard Butler gets to do cool older guy posing and cry when things get down, which I suppose he does passably if you actually care about that sort of thing. The only actor who gets enough screen time to do much of anything is Jonny Weston as Jay and even he is stuck playing a happy-go-lucky surfing optimist who goes through a long arduous transformation to become a happy-go-lucky optimist who is a slightly better surfer.

Chasing Mavericks isn’t  a good movie. The plot and acting are pedestrian and the end of the Jay’s life story is idiotic that no matter how hard the music swells, the filmmakers can’t make it seem noble and heroic as intended. The best thing that can be said about the movie is that some of the big-wave surfing sequences are shot quite well and look rather gorgeous on a big screen. I suppose if you’re a surfing fanatic, there will be some entertainment value in those big surfs and all the surfing-as-life claptrap. However, from what I understand there are also hundreds of surfing documentaries out there that offering nothing but pretty surfing photography and get the philosophizing out of the way in brief narration. Getting your hands on one of those movies is probably the best way to go if you’re inclined to enjoy a rad surfing movie. As for anyone who hasn’t dedicated their lives to riding waves, there’s nothing you won’t get out of this movie that you couldn’t get out of watching a Mountain Dew surfing commercial and at least one of those will take up less than a minute of your life.