The seventh episode of Constantine is an example of a show that could survive on TV. Not quite as edgy as the series pilot or “A Feast of Friends”, yet much more watchable, fun and intriguing than every other dismal episode of this show, “Blessed Are The Damned” deals with a heavy question about faith and ethics.

Though it might not be as up front about it as the other two good episodes of the series, “Blessed” shares their fixation on a hidden morality that rests outside of divine law. Constantine exists in a Catholic-mythology inspired world with rules created by God (I’m assuming), and the best episodes suggest that most humans don’t actually know them.

In the pilot, John Constantine shows us the moral lines of the universe and gives an example of how the damned and blessed binary of the world favours those already hellbound. In “Feast of Friends” he colours outside those moral lines, subjecting a good man and friend to unimaginable torture, in order to save the lives of the masses. In “Blessed Are The Damned” we see the other side of this: how the naive can be exploited by evil through a will to do good, under the false impression that they are on the blessed side of that dichotomy.

We begin with a cold open on an adult brother and sister whose late father lived a snake handler and (recently) died a snake handler. One of the more ridiculous sects of Christianity, snake handling makes sense as a vessel for poisonous naivete in Constantine. If this show is about a hidden Catholic morality, then what better example is there than a sect Christians who so obviously got it wrong? Not to mention, the symbol of the snake fits in with themes of temptation that will be so wonderfully explored later.

At the father’s funeral, Zachary, the main character of our parable, is bitten by one of the venomous rattlesnakes he’s abusing and quickly begins to die. As he’s being resuscitated via CPR, Zack miraculously rises, a glowing object in his hand, and begins a divine quest of healing by regrowing a church-goer’s amputated leg.

That glowing object is an angel feather that came loose as Zack was being ferried to the other side. Once Constantine arrives with Zed (Chas is absent again this episode), John quickly sees that something nefarious is under way when he witnesses the snake handler pray in Enochian (the language of angels). John then starts searching for the negative repercussions that must stem from his healing power (they followed the scry map to this location, so it must be evil causing the healing).

Bad things are clearly happening to nature, but Constantine and Zed can’t quite get a handle on what’s going down. Zed’s struggling with her own lapsed faith as John tries to convince her that yes, angels are real and  that also he’s kind of friends with one. Constantine attempts to formally summon Manny after yelling into the sky, and when the angel possesses Zed we start to get some really fun mythological world building.

It starts with a throwaway comment that Manny, a guardian angel, isn’t just always silently by John’s side, but has other humans he’s watching, allowing him a larger view of humanity. We then get a reminder that Manny can’t wholly interfere with Earthly matters. He can talk to John about his problems and hint at the right direction, but he’s not allowed to tell Constantine things the exorcist doesn’t already know. It’s an obstacle that’s come between them in the past – Manny coming very close to idly watching John die – and it’s about to get tested in a very real way.

With barely any help from Manny Zed and Constantine find the striking image of a dying angel covered in leaves. They take her to a barn, learn her name is Imogen, and hear her story.

Imogen claims that Zack pulled a feather from her wing as she was taking the snake handler to heaven. Manny shows up here again, this time in spirit form, and helps set the stakes. If Imogen can’t get her feather back, she will cease to exist. Zed and John set about getting it back and Manny stays put with his new angel friend. 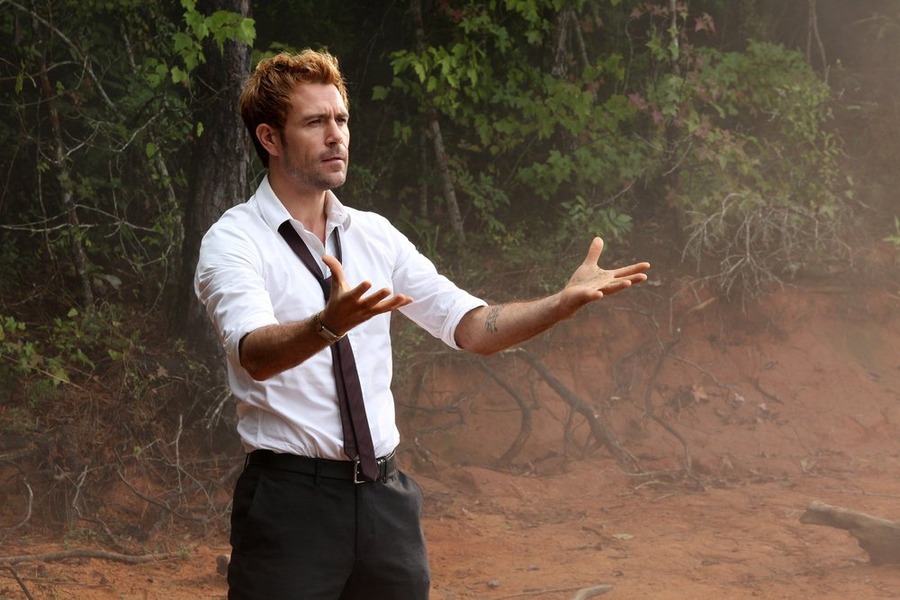 The Zed and Constantine story branch is plagued by ghouls. Everyone that Zack has healed is becoming a ravenous rage monster. Our heroes hatch a plan, once John knows that Zack keeps the feather around his neck, that sees Zed stealing it away during her own baptism ceremony.

During these scenes the theme is developed, of evil being propagated by a man wanting to do good. Zack fully believes he is blessed and repeatedly spouts phrases equating the questioning of the Lord’s will to sin. Blind faith and power on his end lead good intentions to great evil.

Of course, Zack isn’t totally innocent. Before his father’s death, it turns out, he hit and killed a man with his truck. Denial caused him to avoid reconciliation, so when the rattler bit him in the sermon he was hellbound. That makes Imogen a fallen angel, Zack her puppet, and the world in grave danger.

As the scheme to win back the feather is happening we are treated to a few scenes between Manny and Imogen. Apparently, by God’s design, angels are normally compartmentalized so that free will doesn’t develop. The scenes between them, helped out by Harold Perrineau’s usual magnetic presence, build a very exciting tension as a forbidden dialogue transpires.

The angels talk about humans, their abuse of free will, and Manny starts to grow a hubristic interest in what it might be like to be alive. He’s morbidly interested in pain, even more intrigued by the idea of pleasure, and under each of his questions to Imogen there is a deep, dark note of warning.

Manny is Constantine’s only consistently good element and his conversations with Imogen mark the first time I have been excited to see where this show goes. Sure, a lovable fallen angel is one of the oldest bad guys in the book (you know the one I mean), but I love Manny so much that the hint of his corruption and potential transformation into a series big bad is enough to make me kind of wish NBC didn’t halt production on the show.

Manny’s fall is more than just hinted at too, so there is substance to my big bad angel speculation. When Zed returns the feather to Imogen, the fallen threatens to kill John’s partner if she isn’t given free passage and allowed to live on earth. Constantine is incapable of stopping Imogen, so Manny is forced to make a choice: make like an angel and watch as Zed’s head is ripped off, or exercise free will and suffer the divine consequences.

Sure enough, Manny chooses to fall, just a little, taking over Zed and ripping out Imogen’s black heart. It’s a bad ass move that has greater series implications, and it’s really too bad that this show likely won’t live to see the fallout of these actions.

Despite the hope that “Blessed Are The Damned” gave me for Constantine, it wasn’t enough to redeem the series after weeks of terrible, sometimes offensive episodes. It does, however, serve as an example of what this show is capable of achieving when it’s not lazily hacking away at tired horror tropes. There are relevant topics that Constantine can address, primary of which is the search for true morality and identity in an unforgiving war between heaven and hell. “Blessed Are The Damned” is the first time that search has felt real.

The Book of Random Observances:

-If Constantine culminates in a series finale that’s essentially just City Of Angels starring Harold Perrineau, I will take back all the mean things I’ve said about it.

-The obligatory lines describing why Chas can’t join in the adventures are verging on self-parody at this point. Excited for the writers to use “Chas has to wait here for the guy who’s gonna come fix the Internet, so it’s just us this time.”

-Fans of spooky procedurals will recognize snake handling sects as a staple of the genre. A prominent example: X-Files episode 7.9 “Signs and Wonders”.

-I didn’t mention Zed’s art class romance subplot that book ended the episode because it felt like another show. More accurately, it felt like the terrible show that Constantine usually is, infringing on the pretty good show it can sometimes be. For those of you who didn’t watch the episode: Zed had an art class, was aggressively asked out on a date by the hunky model, and accidentally stood him up. Turns out: Zed’s bailing was in her best interest because some shady man was just setting a trap for her. They tried to pass that off as a cliffhanger. It didn’t work because there’s not enough information for us to understand what’s at stake. I don;t need a cliff hanger to know something bad will happen to Zed next week, this is TV and she just almost got murdered by an angel.

-John was actually smoking in this episode. Interesting to see considering the show’s aversion to the character’s rougher edges.

-In terms of intriguing mysteries, Manny and the angel politics are the most interesting. Constantine’s other big questions – What’s the deal with Chas? Who’s that evil guy with the art class model? What is the growing darkness? – those are much less captivating.