Muhahahaha! You guys, I watched this episode by myself in the dark and I actually, no word of a lie, cackled at the end.

I hope you watched it. If not, I’m going to have to ask you to please leave. I can’t be held responsible for someone recklessly wielding the power of the Internet to spoil themselves. Don’t make me host an intervention, because so help me god (sun or otherwise), I will turn this post around. I will do it.

Okay are you back? Did you watch it? Good. Now, onto the rankings!

Just a reminder that around these parts we rank characters on the patented (patent pending) Dork Shelf douche-awesome scale, wherein douchiness is measured in Joffreys (RIP gone 2 soon) and awesomeness is measured in motherfucking dragons.

Hey, hey you. Georgy. Yeah, I’m talking to you. I’m looking at you.

I know you wrote this episode. I checked.

You had to start off with a creepy ass unnecessary murdering scene didn’t you? You just had to. You thought, “hmmm, maybe people don’t fully understand Male Lorena Bobbitt (Ramsay Snow) is pure, unadultered evil… perhaps all that flaying and Bobbitt-ing just didn’t bring up enough bile in people’s esophagi. Yes… and I also think there aren’t enough people for fans to keep track of… a psycho girlfriend would be the perfect addition! To the inconsequential character and fucked up murder mobile!”

Either that or you wanted to remind us yet again that for every warranted, delicious death, we have to pay with the blood of poor, innocent young maidens and Momma Catelyns.

Listen here, you giant gnome: Cut it out. We get it. Valar morghulis and all that jazz. You’ve been telling us for three seasons now that Westeros is run by a cruel and unforgiving troll who bathes in the tears of viewers. You don’t need to keep showing us pointless death scenes that don’t further the plotline in any meaningful way. We. Get. It.

Douche rating: 6300 Joffreys slapping you in the face while asking you to stop hitting yourself.

Hey guys, remember when Backpack used be as cute as a kitten in season one? 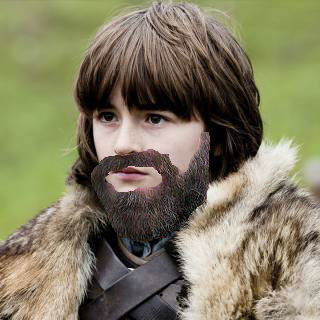 The kid must be truly magical if in what seems like a Westerosi year he’s managed to reach the age of involuntary vocal gymnastics and having to learn the hard way that sweatpants are no longer able to tame his netherly direwolves.

3) (Mostly) Everyone at Dragonstone

As the only rational character at Dragonstone, poor Davos (Stannis’ bearded bestie) has reluctantly become a judge in the crazy bitch Olympics.

Competing in the Lady Macbeth category is Stannis’ wife, Selyse. She started off strong in the competition, burning her brother alive as a thank you gift to the Lord of Light that Melisandre keeps going on and on about.

Has anyone actually stopped to ask whether the Lord of Light actually wants this? I mean sure, gods have been known to want human sacrifices and all, but maybe humans are actually like that free gift with purchase at The Bay. Sure, you appreciate the fact that you got free shit, but really, you could have done without that eye mask that’s bedazzled with 2-cent rhinestones.

Selyse caps off her entry by advocating for child abuse as a useful learning tool, and saying that the blood-curdling screams coming from her brother was evidence of his soul escaping to a better place. Yes, asshole, you keep telling your crazy ass self that.

Davos gives her: 32 “bitch, you need a check-up from the neck up” Joffrey faces.

Competing for the god-focused nations is Scarlet Witch Crazy Bitch, Melisandre. Homegirl takes a running start by looking at people burning alive in agony with a self-satisfied smile. Not enough crazy for you? Well, she then goes on and counsels a small child about how Belinda Carlisle was wrong, and that heaven is not in fact a place on earth. This focus on Stannis’ small girl child makes me very concerned…

Davos gives her: 15 Joffrey side eyes for worrying us and for generally being a creepy douche. Davos would have given her more, but the Russian judge seems to have annexed his paddles.

Last up was Stannis, who complained about not having enough men to go and conquer King’s Landing. Yeah, hey, you might have a lot more men to fight with if I don’t know… you weren’t burning people alive 24/7? Just a thought!

This was a no brainer. Joffrey was his usual smarmy self this episode, pissing literally everyone off but Cersei. Not only did he humiliate cool uncle Tyrion, but he also had to go ahead and force little people to act as the fallen would-be kings of Westeros. The moment when little Knobb started humping a direwolf, everyone was just like…

Basically no one was having any of it and we’re all glad he’s dead.

Douche rating: 70000000 choking Joffreys reaching for the camera like Nick Carter from the Backstreet Boys.

Okay, this might seem weird at first, but hear me out. By dying at this moment in the series, Joffrey preserved himself the ultimate asshat. Joffrey never once made us feel bad for him in the series, meaning that he will forever be the perfect measurement of douchiness for our scale. For that, we at Dork Shelf must tip our hats ever so slightly in his direction. Imagine a mouse wearing a hat (silly mouse, why are you wearing a hat!) and tip that hat. That’s how much we’re tipping ours. No more, no less.

First of all, Margaery looked fierce this episode.

Second of all, poor girl was like a circus ringleader, trying to tame a lion whose main talent seemed to be spitefully crapping itself, then eating that crap, and subsequently vomiting that substance all over the audience.

I am going to use this line forever.

Fight with my boyfriend? “Oh look! The pie!”

Awkward interaction with my racist grandpa? “Oh look! The pie!”

It works perfectly. And her attempts at cooling down the tense festivities would have worked flawlessly, were they not up against a human tornado of facepalms.

Because dammit, he got to flirt with Sexy Inigo Montoya and he had a great one-liner this episode.

Having not read the books I don’t know who killed Joffrey (it literally could have been anyone). What I do know, however, is I love them at the moment, even though I will probably hate them within an episode or two.

Dragon score: a mysterious dragon whose eyes you can only see behind a scarf (it’s trying to be mysterious, don’t ruin the mood by pointing out this is silly).

That’s it for another edition of Douche Ranking Game of Thrones everyone! See you back here next week for more side eyes, more plotting, and more Joffreys (in ranking form only muahahaha).