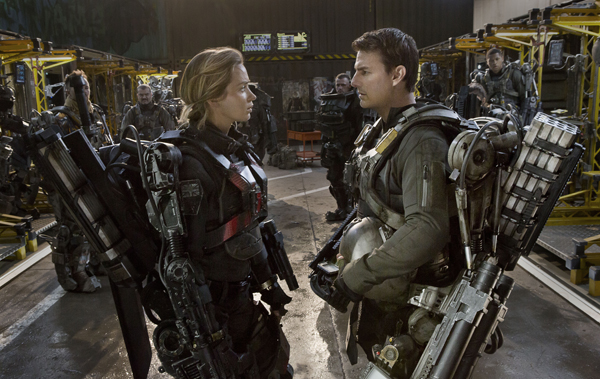 When a movie can be described as “Groundhog Day with aliens and robot gun suits,” it should be a sign that something awful is coming. Yet, somehow Edge of Tomorrow not only works, but is easily one of the best high concept sci-fi blockbusters to come along in a while. It might not be a particularly original movie, but it’s a surprisingly creative one that delivers all of the necessary thrills and spills of good popcorn fodder along with some pretty clever writing and proof that Tom Cruise still has a bit of a gas left in the tank. For those who sat through Jack Reacher, Knight and Day, and Oblivion wondering if the star had finally gone off the rails professionally, Edge of Tomorrow proves why the guy has been such an enduring screen presence for so long. The movie wouldn’t work without him and it works pretty brilliantly. Frankly, the worst part of the whole project is the title, which suggests a generic and meaningless blockbuster experience that thankfully never materializes on screen.

The flick opens with a montage of news reports announcing that aliens have invaded Europe and are taking over the continent at an alarming rate. Cruise pops up as a slick-taking military media liaison whose job is to smile on camera while encouraging civilians to sign up and lose their lives for the good of humanity. Of course, he has absolutely no intention of fighting himself. In fact when a commanding officer (a particularly and delightfully grumpy Brendan Gleeson) suggests that Cruise should fight, he tries to talk and then bribe his way out of the arrangement. But the next thing he knows, Cruise has been knocked out and wakes up on the front line where a sinisterly smiling Bill Paxton announces that he’s about to strap on a robo-fighting suit to join the resistance. With no real background in combat, Cruise lasts just long enough to see why Emily Blunt’s alien-slaying warrior has the nickname “Full Metal Bitch” and then dies on the battlefield with a face full of alien blood.

Then Cruise wakes up and lives through the exact same fatal day again and again and again. It’s the old time loop pickle and he has no idea what’s going on until Blunt notices and reveals to Cruise that she was in her own time loop once. Apparently these dastardly alien foes have a leader who controls time and by getting alien goo all over his face, Cruise has inherited that ability. So, Blunt gradually trains him over a series of repeated days and Cruise dies at some point every single time (often in a hilarious Wile E. Coyote style).

This section is where the movie is at its most unpredictable and interesting. Director Doug Liman (Go, The Bourne Identity, Mr. and Mrs. Smith) has a great deal of fun pulling together bizarre montages, milking dark humor out of repeatedly killing one of the most famous faces on the planet, and toying with Cruise’s image. Gradually we see Cruise grow from an arrogant idiot douchebag into a slam-bang action hero. It’s an amusing transition that plays to the actor’s strengths and also explains how he’s such a perfect action hero in the movie (it’s pretty much all pattern recognition like a videogame). The most creative scenes in the script come when the audience is never sure just how many times Cruise has been in a given situation and gradually the weight of the time loop wears him down and the actor gets to deliver some genuinely moving and unsettling moments.

Eventually as with any sci-fi action movie all of the temporal and narrative experiments are shoved aside in favor of a traditional boom-boom action ending. It’s disappointing see the film slip-slide its way into conventionality, but Liman at least delivers enough thrills to make it all feel satisfying. The film is ultimately just another blockbuster, but one with enough interesting diversions along the way to feel like something more (including some outstanding performances from Blunt and the supporting crew of character actors). It also oddly comes off as a very person project for Cruise and his director. Both are notorious perfectionists in the Hollywood community who have been known to infuriate collaborators with the demanding nature they place on themselves and others. In Edge of Tomorrow, they’ve found a movie rooted in doing the same thing over and over in frustratingly large numbers until finally the once scumbag protagonist becomes a hero.

Though the Liman/Cruise pairing seemed odd on paper, in practice it feels like a movie that they could only have done together and is easily the best movie either of them has delivered in years. It might still be early days of blockbuster season, but Edge of Tomorrow already feels like it’s going to be one of the best releases of the summer. It really is a shame about the title (which was originally the much more awesome All You Need is Kill, the title of the graphic novel the film was originally based on), but given that’s pretty much the only thing the filmmakers got wrong in the project, I suppose it’s forgivable.