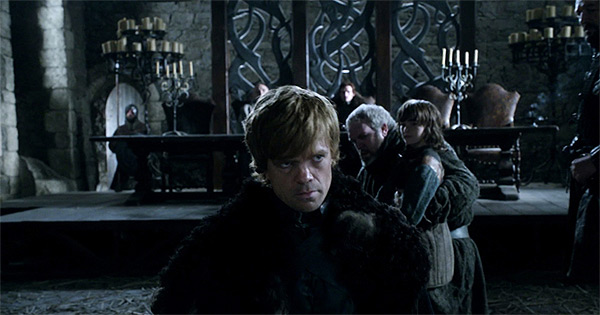 The fourth episode of Game of Thrones, entitled Cripples, Bastards and Broken Things, has a steady supply of all of the aforementioned outsiders and invalids. Jon Snow continues to face challenges as he trains to become a brother of the Night’s Watch; while young Bran Stark – whose dreams are being haunted by a mysterious three-eyed crow – struggles to come to terms with his new life as a parapelegic. Viewers are also introduced to another outcast – Samwell Tarly. A plump coward disowned by his aristocratic family and forced to take the black, Sam is ill-prepared for the harsh realities of life at Castle Black.

We also finally learn how yet another outcast, Prince Joffrey’s bodyguard The Hound, became so hideously burned. It seems that Sandor Clegane and his monstrosity of a brother, Gregor, have a bit of a messy history. Viewers quickly discover that the hulking Gregor Clegane — also known as The Mountain That Rides — has a penchant for violence, when he kills his opponent in what was meant to be a friendly tournament. After The Mountain dispatches the unfortunate Ser Hugh with a lance to the throat, Littlefinger regales Sansa Stark the terrible tale of the elder Clegane holding his younger sibling’s face to the fire when they were children. Expect the tumultous and disturbing relationship between these brothers be addressed more closely in future episodes.

But of all the outcasts in the Seven Kingdoms, none is more compelling then one Tyrion Lannister. The Imp has several increasingly hostile encounters with the Stark family during his return to King’s Landing. Despite his kind offering of designs for a saddle that will allow young Bran the freedom to move about on horseback, Robb Stark, already suspicious of Tyrion’s involvement in his brother’s fall, is less than welcoming. It is still very unclear what, if anything, the lesser Lannister had to do with the assassination attempt that nearly took the life of Catelyn and Bran. We know that it was his dagger that the would-be assassin used, and that his loyalty to his family is unquestioned. However, his involvement in the affair would indicate some knowledge of his siblings’ less-than-proper relationship. Does Tyrion know of Jaime and Cersei’s illicit affair? Our gut says that he does not… which makes his harsh treatment at the hands of Robb and subsequent arrest by Catelyn all the more troubling. The Lannisters may have started this feud, but the Starks seem more than willing to escalate it. – Will Perkins

Here is Thomas with a run down of the rest of the episode:

The balance of power between the Targaryen siblings has undergone a wholesale 180 degree shift in the four episodes we’ve seen – but Viserys’ understanding of the situation hasn’t caught up with reality. Viserys’ hyper-sensitivity and his callous treatment of his sister reaches new lows in this episode. As Dany, Jorah, Viserys and the hoard arrive at the Dothraki capital of Vaes Dothrak, Viserys takes exception to his sisters bossiness and rides into the city sullen and at the head of the pack – though no one seems to be following him.

One of the episodes most curious moments is the sex scene between Viserys and the slave girl Doreah in the bathtub. Viserys is at his touchy, selfish best – though he becomes animated as the girl quizzes him about dragons. Viserys has referred to himself as “the last Dragon” before, but when Doreah asks him whether he deserves the title or not, he feigns modesty, responding that, “it’s entirely possible.” This modest response is in stark contrast to the times when Viserys raises a hand to his sister, and threatens her with cries of “You have awoken the dragon.” That Dany immediately responds by smacking her brother in the face with some nearby chains and drawing blood, is telling. Unlike dragons — who deal with “anything that tries to hurt them,” by burning their enemies away “like so many candles,” — Viserys doesn’t really scare anybody.

The dragon concept is addressed again in a private conversation between Dany and Jorah. When the concept of Viserys as “the last dragon” is raised, Jorah proclaims that Viserys is a fraud. In Jorah’s view Viserys – far from being a dragon – “is less than the shadow of a snake.” The audience at this point will quite rightly shares Jorah’s view.

Meanwhile in northernmost Westeros, we are introduced to Samwell Tarly, not-so-affectionately named “Piggy” by the hard edged master-at-arms, Ser Alliser Thorne. The scenes at The Wall were very reminiscent of the film Full Metal Jacket – and “Piggy” is definitely the Gomer Pile of Castle Black. Thorne takes his role as drill sergeant very seriously and hits every note: verbal abuse, homophobic insults, the assignment of menial tasks to Jon Snow for protecting Sam and harrowing stories about what he’s training the men for. We even got the classic night time barracks ambush as the recruits threaten a comrade in order to keep him in line. It got to the point that when Jon Snow started his anecdote about his inability to consummate a transaction with a whore named Ros, I half expected him to quote her as saying “Me love you long-time.”

The Flow of Information and Stark’s Investigation

I spoke at length last week about the lengths to which Game of Thrones has gone to dramatize the flow of information. That theme continues to be developed this week most notably with the conversation between Petyr “Littlefinger” Baelish and Eddard Stark in the courtyard. Baelish, when he’s not pointing out the various spies in the courtyard, suggests to Stark that the former Hand’s squire, Hugh – who was recently knighted – was responsible for slipping Jon Arryn the poison.

I thoroughly enjoyed the scene between Baelish and Stark and especially enjoyed their exchange about trust. Littlefinger asks Ned if there is someone in his service that he trusts completely, to which Ned responds “Yes,” in reference to Jory. Littlefinger’s response: “the wiser answer would have been no,” turns out to be prophetic. Ned – upon discovering the King’s bastard – sends Jory with a message to King Robert, whose room is being guarded by Jaime. Relegated to guard duty, Jaime is surly and refuses to do Jory the courtesy of handing the message to the King. On the surface it’s a superficial exchange, but had Jaime agreed to deliver Ned’s message to the King the Lannisters would have learned of Stark’s investigation. There have been a number of moments like this already and I expect the “flow of information” theme to continue to be explored in Thrones.

Baelish also directed Stark to a smithy where he discoverd the King’s decidedly dark-haired bastard son, Gendry. We also learn more about what Jon Arryn, the former Hand, was up to before his death – he was looking through noble birth records and repeating to himself, “the seed is strong.” It seems that Ned’s investigation is beginning to bear fruit, or at least plants.