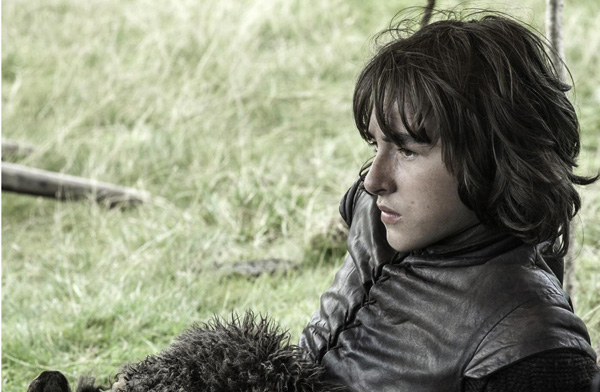 It helps that we don’t jump across the Narrow Sea to visit Daenerys at all, but it does particularly good job of utilizing ironic repetition, a device that lends some familiarity and consistency to what might otherwise be an overwhelmingly busy episode of television.

We begin with Bran walking through the forest in a dream sequence, hunting the three-eyed raven which has harassed for three seasons running. When he aims his bow to fire at the Raven, his brothers appear and instruct him on archery using the same lines they did in the very first episode of the series. When he misses they mock him with the same lines as well, only to have Eddard Stark’s booming voice offer perspective as he did before: “and which of you was a marksman at ten!”

When he awakes, Wildling escort Osha wants nothing to do with Bran’s dreams while bidding him to hurry further north. “No one even knows we’re alive,” Bran reasons incorrectly, as we later find out when he’s roused from another slumber by the dorky but seemingly all-knowing Reed siblings Jojen and Meera.

We jump to Robb Stark making out with his new wife Talisa, who mocks the Westerosi as grim (a stereotype which certainly applies to the Starks but perhaps less so to the Tyrells). The always somber Roose Bolton interrupts with bad news regarding Robb’s grandfather (dead) and his brothers Bran and Rickon (probably dead). Catelyn is predictably despondent, though she has the presence of mind to inquire as to whether or not Robb has heard from Theon Greyjoy.

Last we saw Theon he was being carried out of Winterfell by the Iron Born he ostensibly commanded. Now he’s being tortured in gruesome fashion. An anonymous man in the corner tells Theon he’ll free him later that evening and that he was sent to help by Greyjoy’s sister Yara. Why would his own kind be torturing Balon Greyjoy’s son, right?

Robb and Catelyn are headed to Riverrun to mourn their grandfather/father, and Bran is headed north. We then skip to Jaime Lannister and Brienne who are marching southward to King’s Landing, with Jaime goading Brienne all along the way.

Jaime’s been portrayed in the series so far as mostly a detestable scoundrel. But here he sounds an awful lot like Tyrion as he mocks Brienne’s asexuality (and the “tulip” Renly’s not so secret sexual preference for “curly haired little girls like Loras Tyrell”). This establishes a bit of a theme for the episode actually: the interplay of power and sexuality when it comes to rulers, Renly and Loras in particular.

Moving along to King’s Landing, we find Cersei trying to re-establish some sort of sway over Joffrey (if she ever had any to begin with). She seems to think her sadistic (and vain, too, based on the way he checks himself out in the mirror) son wants to talk about his relationship with his mother. She claims to know that Joffrey’s betrothed Margaery Tyrell “dressed like a harlot for a reason,” but she has no clue how to diffuse that power, and the sway it holds over her son.

Obviously Cersei’s efforts fail spectacularly, though Joffrey drops another in a series of ironically incorrect statements when he defends Margaery as having “done what she was told” because after all “that’s what smart women do.”

Olenna Tyrell (Dame Diana Rigg) promises to be a fascinating character; her coquettish intriguing and mockery were pretty damn entertaining here. Some quality acting from Sophie Turner here too , who hasn’t really been given much to do in the series other than be scared and freak out when her father died. 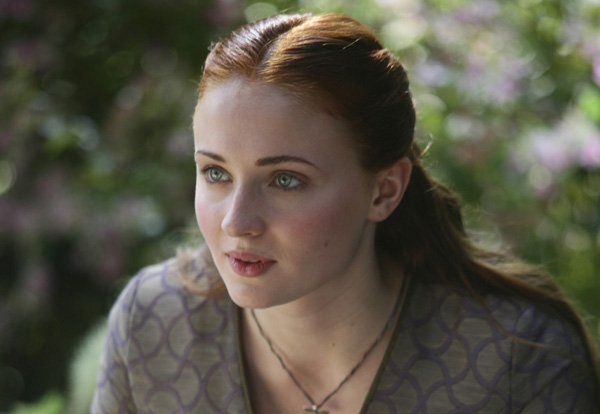 “He’s a monster,” she finally blurts out, under supreme levels of duress, and then beseeches them not to call off the wedding. Sansa’s still naïve as ever, there’s no chance of that happening, as Margaery’s indifferent reaction to the news that her future husband is a sadist makes plain.

We cut back to Robb Stark’s host who are moving across the land back to Riverrun and seem a dispirited, hopeless lot. Cool shot of those Bolton flayed man banners which are fabulously gruesome…

Catelyn blames herself and her inability to love “motherless child” Jon Snow while Robb’s bannerman tells him he lost the war when he made a political misstep and married a girl who wasn’t a Frey. Sex, power and politics – pretty much one in the same in Westeros.

Skipping north of the Wall, we find out that Mance Rayder isn’t so much a typical king as he is the secretary general of the United Nations; i.e. “my army speaks six languages.” To his people, it’s all about survival. We also meet a “Warg” scout, Orell (Mackenzie Crook), who speaks of the dead Crows we saw during the prologue of last week’s premiere. Jon is confused by the Warg’s white eyes and ability to control and inhabit the body of a hawk.

From there we catch up with Samwell Tarly whose own brothers are goading him into giving up and dying – which Lord Commander Mormont forbids him to do. The action north of the Wall is excellent, but in an otherwise tight episode these two vignettes didn’t quite fit in with the rest of the episode.

The other plot line I wasn’t too keen on was the Brotherhood without Banners scenes with Arya. The Brotherhood sings as they walk the countryside, and get bawdy while drinking ale which is well and good but fits a bit too neatly into the Robin Hood archetype for my liking. That said, the set piece with the arrow shot into the air in order to force Hot Pie to come along was sweet.

Finally, after a long delay for those familiar with the source material, we meet the Reeds about a half season later than we’d expected. I really liked how they introduced Jojen and his sister Meera, where the dorky sibs check-mate Osha, calm the direwolf, and appeal to Bran by knowing an awful lot more about him and his plans than he does.

Back in King’s Landing, Shae puts on the airs of attachment with Tyrion, even getting jealous when he admits to having slept with a prostitute long before he met her, and also when he calls Sansa “a great beauty.” Is she acting the way she knows her client wants her to act? Does she have genuine affection for him? At this point the viewer probably trusts her, but this struck me as her laying it on a wee bit thick.

Finally we get the best scene of the season so far, as Margaery completely neuters and sticks her claws into Joffrey Baratheon. She’s unafraid when she enters the room, and though things threaten to go briefly sidewise when the topic of her marriage to Renly is broached, Margaery is a pro. “The subtleties of politics are often lost on me,” she says – possibly the biggest lie we’ve seen in the series so far (not including Littlefinger, of course). It’s pretty clear that Margaery one of the best players of the game we’ve met besides Tywin Lannister and Petyr Baelish.

By the end of the conversation she asks if Joffrey would like to watch her kill something, and he pretty much purrs the answer “yes.” The boy terror, hated by all viewers to the point that the actor who plays him is frequently harassed in public, is reduced to silly putty in the hands of a wily teenage girl.

The final scene of the episode is the third rather remarkable set piece of the episode, as Brienne completely routs Jaime in one of the better, and most extended sword fights the series has given us yet. They’re then intercepted by Roose Bolton’s bannermen, and this seems like it might be a pickle that even Jaime’s promises of Lannister gold won’t free him from.

On the whole I thought the show did well to develop a central theme: the critical link between power and sexuality. There was an attempt to tie Bran’s plotline with Jon’s through the presence of Wargs but that didn’t quite work as well for me, and neither did the diet-Robin Hood, Brotherhood without Banners sequences. But as ever, Game of Thrones gives us just enough that we come away satisfied, despite the awesomeness being frustratingly interspersed with ever-present loose ends and occasional ill-fitting sequences.