Stanley gets up from his desk. No one else in the office. He takes a look around to see where everyone has gone – maybe he just missed a memo. He enters a room with a door on the right, and a door on the left.

So begins The Stanley Parable, a first-person exploration game that breaks all the commonly held rules about narrative structure in games and, with the help of narrator Kevan Brighting, gleefully mocks player agency, video games as a whole and whatever else he can think of to make your experience as confounding as possible.

Davey Wreden, creator and writer for Stanley, was at Gamercamp this past month to showcase the game, which has already earned a flurry of glowing reviews from the games press. Wreden started work on the game as a Source engine mod, and it eventually blossomed into a full release thanks to Steam Greenlight.

The Austin, TX., native sat down with Dork Shelf at Gamercamp to talk about the unexpected reception to The Stanley Parable, the difficulties in building his very first game and why he couldn’t care less about “what is a game?” kinds of questions.

What were you doing before you started work on The Stanley Parable?

I was in film school, and I just decided I didn’t really want to do film.

Was there anything about film school that made you gravitate towards making games instead?

Well, I think for one thing there’s just more about games we don’t understand. You know, films we have a greater understanding of, relatively, and with games people can be surprised in a thousand different ways we can’t even understand yet. And just the fact that I like to game. People who like films watched a lot of films growing up, and I grew up with games. 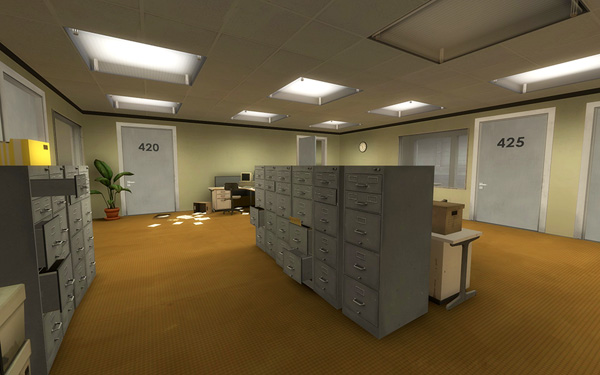 Was anything interesting cut from the final version?

There was an ending where you were going to have a gun and shoot aliens, but it just didn’t work. It didn’t fit the tone. We thought it would be funny, but we looked at it pretty early and thought, this is not the game we want, so it was cut.

This game got a very positive reaction. What’s it been like?

Overwhelming. I was surprised because I tend to think of Stanley as being very hard to talk about, but people seem to be eager to try to share it. It’s been a lot more than I was prepared for, in a good way. But it can also be stressful. It can be a lot to take in. It can make you vulnerable.  William Pugh [co-developer] and I were kind of emotionally unstable for a few days.

What was the original idea for the game?

I don’t know. At the time, I played Dear Esther and Radiator, and I saw that something interesting could be done with the Source development kit. I tried it out and realized I wasn’t that good at it, but I found out I could do things like make empty hallways and add a voiceover. So it was a struggle of limitations. It was all about the restraints that I had technologically to build something with what little skill set I had.

And a narrator just made sense because it was such an easy thing to make. I just needed to find the right voice actor. I knew how to find a voice actor better than I knew how to build a beautiful level.

Why did you take the game in a choose-your-own-adventure direction?

There are two doors, and you have the option of doing what the narrator says or not: that was all I had at the beginning. And I was like, what kind of game is this trying to be? I saw that it was becoming a choose-your-own-adventure. If it splits here, then it’ll have to split again.

But I generally dislike branching narratives like that, so how do I make it in a way that I would actually like?

A lot of Bioware’s work tends to focus on crafting your own personal narrative through these events. They’re lovely games, nothing against them. But [those games] never rang true to me. I never felt like it was “my” story. It was someone else’s story. I was just opening certain windows to see what they had already written.

I wanted to take the focus off the idea that one particular branch is “your story.” I wanted all of them to be your story. What if there was no one correct path? If all of them had something to say, and if there was a meaning that you personally had to construct that ran through all endings? I hadn’t really seen anything like that done before and I wanted to know how you would do that.

In the end, how did it turn out?

That’s for you and everyone else to decide.

You could play it for 10 minutes, get one ending and stop, or play through dozens of times. Is the player expected to try to get all the possible endings? Is there a “best” way to experience the game?

I don’t know, honestly. The game gives the player a certain amount of reference points and narrative beats. If you want to find more of those beats, if you want to try to construct them together in a way that makes sense for you – because the game itself doesn’t make a lot of sense – you put in the work to craft those pieces together on your own. The game doesn’t do that for you. Whatever it is that you create, is your creation. This was my story. This is not what happened to anybody else.

People have come to me with all sorts of different interpretations. At that point my hands are off. It’s not mine anymore. It’s yours. It’s what you make of it.

Do you have your own interpretation of the final product?

Yeah, for sure. Of course.

There’s a bit of meta-game commentary here; the narrator talks a lot about video games and the fact that you’re playing a game. Were you trying to make a statement on what a game is?

I think those conversations are predicated on certain beliefs and terminology that are not useful. Are video games art? I think the idea of something being art or not inherently has no bearing on how things get made. No one makes really compelling, interesting stuff because they’re trying to make art; they’re doing it because it’s what they want to do.

I want us to stop analyzing it. I want us to experience and create and to feel joy and happiness through playing, and to share about others, and to learn more about someone else, and to be happy and to discover and to explore.

When I put this thing out into the world, the only thing that matters to me is: did it make you think? Did you have fun with it? Did you enjoy yourself? Maybe you did, maybe you didn’t. Can you talk about it with someone else and see what they thought? Maybe you’ll see something in yourself and what you like in the kinds of works that you consume.

Beyond that – I don’t mean to shut [the conversation] down or anything – but it’s just not relevant to me. I don’t care.