Hello readers and welcome to another recap of Girls! Did you miss my reviews over the holy holiday of the American gods named the Super Bowl? Strangely enough, I did not follow the game beyond silently judging Tom Brady for wearing a child’s pom pom hat during the Deflategate press conference (I say “strangely” because I usually love big sporting events, particularly during the Olympics, when my body becomes possessed by the ghost of a Newfoundland curling addict).

Now that we’ve checked in with each other, let’s get to the recap!

As you may remember, season one saw Hannah tank an interview by incorrectly gauging her employer’s tolerance for rape jokes (for future reference let’s just assume that tolerance is zero). The opening interview scene of this episode was infinitely more uncomfortable to watch because of Shoshanna’s obliviousness in the face of her own shortcomings.

Before I get into this scene I have to ask: how on earth is Shosh landing “seven interviews in two weeks”? Earlier this season the character was offered a junior buyer position at Anne Taylor and this week she interviewed at McKinsey & Company, a multinational consulting firm. Are her marks that good? Is she pulling a Don Draper and just getting business people blackout drunk and convincing them they offered her an interview? Or is she just inserting random terms into her resume that she knows will be picked up by some weird algorithm used by these employers?

Pictured: Shosh filling out the “skills & interests” part of her resume

Also, how is she already interviewing without having to go through fifty uncomfortable coffee meetings with strangers? Doesn’t she know you first need to tell your sob story to out of touch older people while internally screaming “how am I supposed to GET experience if no one will GIVE IT to me?!?!?!?”

In summary: I had little sympathy during this scene. Pay your dues, betch.

After the disastrous encounter, Shoshanna vents to Marnie and Jessa about how frustrating it is to put energy into an interview when it goes nowhere. While Shosh’s statement of “what makes these people qualified to judge me?” is played for laughs with Marnie’s deadpan response of “Well they have the job, so that’s what makes them qualified,” the feelings beneath Shosh’s outrage are completely understandable. Sure, an employer can judge whether you know enough to do the job, but after a while it’s hard not to interpret rejection as a personal dig.

When Marnie tries to solicit some advice from the other girls about her new music, Shosh equates the tune to a Top 40 earworm. This is a completely accurate assessment seeing that Marnie’s music sounded exactly like Colbie Caillat (whom I still resent for making me love the song “Realize”).

Back in Iowa, Hannah has difficulty writing, her confidence significantly shot due to the judgmental opinions of her classmates. Seeing that open hostility didn’t make everyone suddenly appreciate her point of view, Hannah turns to passive aggression to mend her problems. Under the guise of an apology, Hannah then writes a letter to the class that essentially blames their attitudes for her writer’s block.

On one level, Hannah’s feelings are valid.  From what we’ve seen, her classmates are dismissive of her writing style, and you can’t blame her for trying to address this issue. But while I feel for Hannah, she’s still an asshat. Listen, if you’re going to apologize, do it sincerely without absolving yourself of responsibility by blaming your reaction on others. Provocation or no, you still deeply insulted everyone around you, you psycho.

After the tense session, the workshop coordinator makes Hannah face the uncomfortable truth that she is responsible for her own happiness. While some aspects of life will always be out of her control, Hannah is an adult who has the luxury to escape situations that she doesn’t want to be in. The difficulty in accepting this concept, however, is that unhappiness becomes an active choice rather than something you can blame others for.

Later that day, Hannah’s pop pop takes her out for dinner and offers perhaps the kindest piece of advice he could give her: fuck everyone and their judgment, including your parents. For the past two seasons it’s been clear that Hannah’s father is incredibly proud of her entry into Iowa. The fact that he is able to set aside his ambitions for his daughter and encourage her to make the decision that she thinks is best shows just how much he loves her.

In New York, Marnie and Douchey McJizzface’s attempt to make music but keep getting interrupted by the bullshit that comes out of McJizzface’s mouth. “I’m happy to apologize another time if you think it will help”? Are you fucking kidding me?

In Brooklyn, Ray seethes over the noise pollution caused by the installation of a new stoplight on his street and eventually he starts yelling in traffic. Shosh, who was “just in the neighbourhood”, eventually interrupts his psychotic break. Consumed by the stifling freedom of unemployment, Shosh offers to accompany Ray while he buys underwear and socks (“sounds like a terrible time” says a nearby nudist).

Like any sensible human being, Shosh points out that buying a 4-pack of t-shirts for $12 is not something a grown ass man should pride themselves on. The episode then essentially devolves into an episode of What Not to Wear, but with no 360-degree mirrors and fewer gay men making Ray cry about his self-worth.

While Ray is changing into a $75 t-shirt, Shosh makes the grown-up move of apologizing to her ex about the unkind way she ended their relationship (yeah maybe telling someone you pity them like a sad monkey in a cage was the wrong choice).

In addition to apologizing in a way that felt sincere and heartfelt (take note, Hannah and McJizzface), Shosh offers up her unyielding friendship to Ray, without any strings attached. Awww, guys, our little (possibly autistic) heroine is growing up!

When the former lovebirds are set to part, the wall of sound coming from the busy street immediately increases Ray’s anger levels. Wisely, Shosh suggests that he put his energy into action and try to change his situation instead of just screaming into the void.

Across town, a distraught McJizzface goes to Marnie’s and reveals that—SURPRISE—he broke up with Clementine for her. “Hooray,” Marnie first thinks, “we’re the musical version of Angelina and Brad! Our love is eternal and we will have an army of children to play folk music with us on tour!”

Instead of sharing in his lover’s happiness, however, McJizzface crumples into a puddle of incoherent mumbling. Confused, Marnie prods for details and finds out that—SURPRISE—Clementine was totally over it and she actually initiated the breakup. How romantic that he went to Marnie out of loneliness instead of as an active choice. This will definitely end well.

We then end the episode with Hannah predictably leaving the Iowa Writer’s Workshop and heading back home to New York. Unfortunately, Hannah opens the door to her apartment and finds a strange woman in her home named Mimi Rose who is definitely not Adam’s roommate.

Welp. Episode 5 is going to be a shitshow. 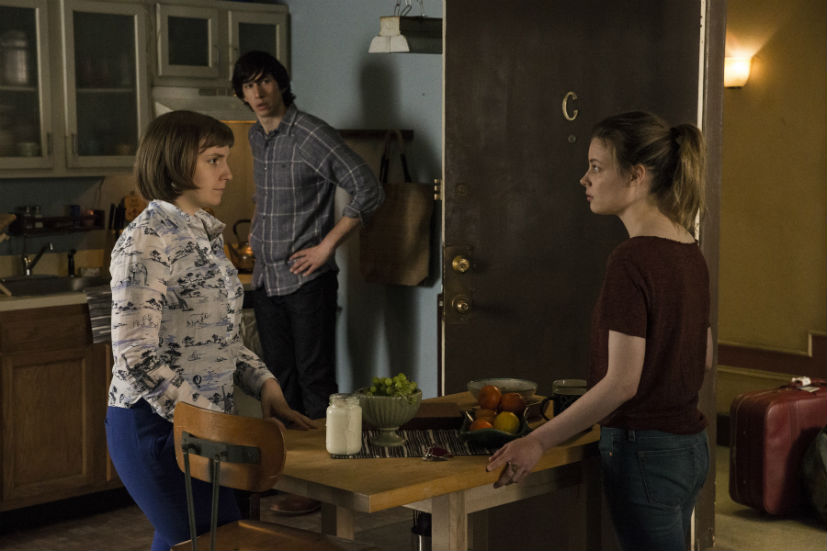 Overall opinion: This was a nice, calm little episode. Low on the laugh out loud humour but also mercifully low on the Jessa quotient, “Cubbies” felt like a bridge episode that shifted many of the characters’ positions in their own universes.

Hannah’s storyline in particular was well done. While leaving the Workshop means her immediate future is up in the air, Hannah’s conviction in her own writing style and voice is stronger than ever. Although finding out what she doesn’t want may not be entirely satisfying, the discovery is nonetheless valuable and the process is commendable. If anything, Hannah’s decision to leave the program is braver than her decision to enter it in the first place. If you don’t agree with me, just think about how hard it is to leave a long grocery checkout line you’ve been standing in for 10 minutes even though a shorter line beckons you from just two feet away. Overcoming a sense of entrenchment is difficult for all of us, and escaping it feels almost insurmountable when significant financial and emotional investments have already been made. Props to Hannah for essentially leaving her program at the altar.

The other characters’ story lines were also great this episode. I loved that Marnie is less love struck and more in control of her situation with Desi, particularly in the way that she questioned his version of the breakup. Sadly, their relationship is over before it’s even started. Men just out of long-term relationships are damaged goods, Marn; especially ones that were dumped. This is not a win here.

Shosh’s arc this episode was also decent if slightly problematic. The main issue I had this character is that her personality change came out of nowhere. How is it that she idiotically confuses honesty with rudeness at the beginning of the episode but then the next day with Ray she shows a complex understanding of her own emotions? The two versions of Shosh are so starkly different that her character is bordering on schizophrenic. Get it together, Girls.

Trendy gaysian: “I’m sorry, I worked really hard on my story. It’s about a robot horse, and I would really like to get back to it.”

Shosh: “I just don’t understand how nobody tells you how bad it is in the real world” / Marnie: “Yeah they do. It’s pretty much all they ever tell you.”

Shosh: “I like knowing that I did love you because it makes me think that I might be capable of something else truly great someday.”

Ray: “I’m not going to scream in public. That’s something I do in private.”