Bad things happen and God doesn’t intervene. Speculate however you want about the classic problem of evil, but the fact is that if there is a God he doesn’t protect us from the horrors of reality. If you’re Hannibal Lecter, this thought is one you take pleasure in, validating your importance while collecting the church collapses that kill God’s worshippers at their most devout. If you’re Frederick Chilton, well, you probably haven’t given too much thought to it (though you really ought to), but if you did it would probably inspire an impotent and fearful rage.

These two viewpoints on God’s indifferent cruelty are at the heart of “The Number of the Beast is 666,” the second last episode of Hannibal, and they are each fully realized. Chilton and Lecter’s conflicting relationships with the supreme being provide the central conflict and the overall thematic drive for the hour, one of the most difficult to watch in the series. The episode bleeds sympathy for a man sent to a torturous demise by an indifferent God.

“Number of the Beast” is also one of the most simple plots of the series. In an attempt to stir Francis Dolarhyde from hiding, Will Graham and Jack Crawford use Chilton as bait. They publish an interview in Tattle Crime accusing the Tooth Fairy of being a self-hating pervert, and while the intention was to instigate a confrontation between Will, Francis and a squad of hidden SWAT members, Dolarhyde goes after poor old Frederick instead. Chilton is subsequently glued to a wheelchair, educated on the nature of The Great Red Dragon, mutilated and burned alive. 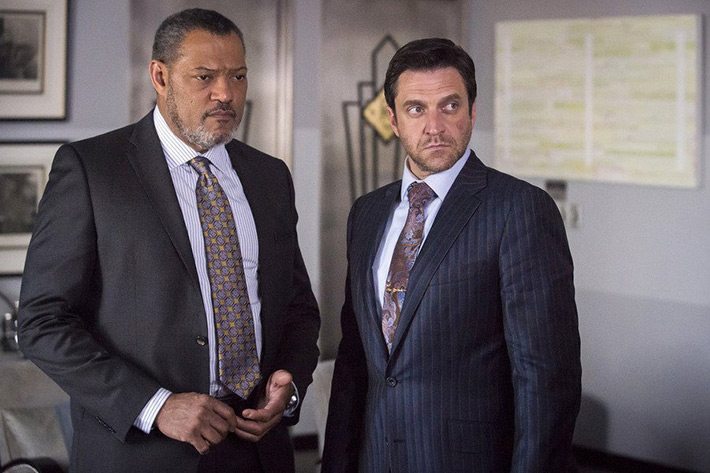 If you are at all familiar with the story of Red Dragon you will recognize this as an integral and iconic part of the story. Francis Dolarhyde, for all his family killing and tiger petting, is most remembered for biting off the lips and setting aflame the man who publically defamed him in the media as part of an FBI scheme. The difference this time is that it happened to a different Frederick. In the novel and both film adaptations, the wheelchair of death was reserved for Freddy Lounds (the sleazy male version of Lara Jean Chorostecki’s Freddie Lounds).

So, before we get into the nitty gritty symbolism of Frederick Chilton’s pitiful fate, let’s all take a moment to breathe a congratulatory sigh of relief for Freddie Lounds. The tabloid journalist has escaped her written destiny twice. In season two, in order to allow Will to get closer to Hannibal, she was burned in canonical effigy by Jack Crawford. This time the other Fred burned in her place. As the best of all possible Loundses, Freddie has survived the series.

Freddie’s invulnerability in Hannibal is symbolic of her relationship to the show’s world. In a therapy session between Will and Bedelia Du Maurier this week, the two agree that in order to play you have to pay, which is another way of saying that with Hannibal Lecter observation is participation. That is, unless you have Lounds’ journalistic distance. The key to Freddie is that she has not once in the entire series agreed to play the show’s most important game: cannibalism. Every character on screen in “Number of the Beast” has tasted human flesh except Freddie and Reba McClane. Lounds has sat at Hannibal’s table and refused to eat human meat, separating herself from the rest of the show’s cast by virtue of her vegetarianism. She is a wholly neutral party, rejecting the values of every other character on a base level, and her abstinence has paid off. 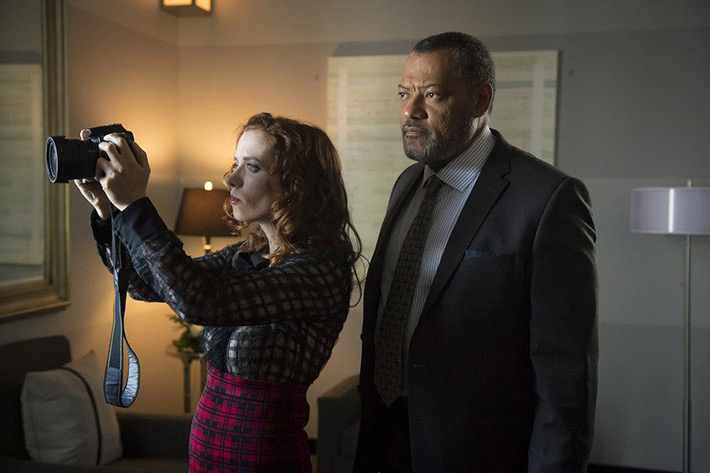 For the characters playing the game, “Number of the Beast” ups the ante. In the episode’s cold open, after Will and Bedelia speculate on the nature of Hannibal’s love, Jack has a conversation with the incarcerated Lecter who no longer has phone privileges. Crawford accuses his nemesis of being the true Red Dragon, a prescient and self-aggrandizing move as Hannibal points out that it positions Jack as God (obviously Jack agrees with this assessment of hubris). All gods, Lecter says, demand sacrifices.

While Hannibal is often placed in the role of God, pushing the divine label onto Jack is nothing new for the show. Will and Hannibal might  the series central characters, but the overarching conflict through the entirety of Hannibal has always been Crawford versus the Chesapeake Ripper. In season one Hannibal pulls all of the strings, while in season two Jack does. The two men are now evenly matched, though their methods vary and are separated by an arbitrary line of moral alignment. It’s God fighting Satan, and now they each have their own Christ (Will and Francis respectively)

This posturing, of Lucifer versus God, really evokes the Biblical tale of Job. Hannibal challenges the almighty Jack, then serves him Chilton for the sacrifice. Frederick, in conversation with Lecter prior to his conscription, is made small. Hannibal has torn him apart in the journal of psychology, and has in one way or another lead to the man’s previous disfigurements. Later, when Chilton is naked and in the chair of doom, we see these old scars: the incision where Abel Gideon removed the psychiatrist’s organs one my one; the bullet hole in his cheek from a woman who thought him to be Lecter. Once again, the evil in the world has been pushed in his direction as a result of the war between the show’s deities. He has taken it all without question. 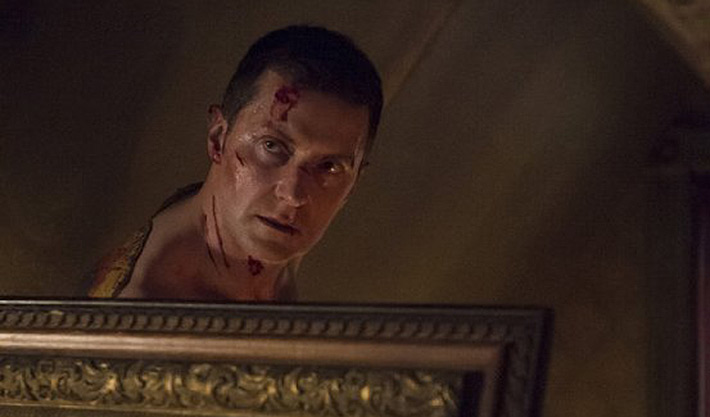 The majority of the episode is spent with Chilton in the chair. Francis Dolarhyde, more dragon than man, shows Frederick his work in order to make him better understand. He then, speaking for the interned Lecter, has the following exchange:

DOLARHYDE: Do you think God is in attendance here? Are you praying to him now?

CHILTON: We pray to God mostly when we are scared.

DOLARHYDE: Does God help you?

Given that Jack is playing God in this episode, the scene is condemning of Crawford and his moral high horse. Thrice has our proverbial Job been mutilated in this contest between the Guru and the Ripper, and really he has committed no crime other than being expendable and a bit of a fool. You can argue that Chilton is responsible for Abel Gideon’s crimes, but it would be inaccurate to say Hannibal and Jack had no agency in that either. Chilton is just a little lost lamb trying to do something important with his life.

Raul Esparza puts his hat in for the best performance of the series as he is interrogated by Dolarhyde. His portrayal of Chilton has always been a fun highlight of the show, but to make a court jester feel so vulnerable and painfully pitiful opposite Richard Armitage at his most terrifying is a feat of its own. His whimpering is never without intention, maintaining the character’s self-interest while still showing us what real begging looks like. Even in his moment of forced silence as Reba brings Francis soup and pleads for his love, Esparza’s wheels are turning. He is man who has experienced so much evil and is still convinced that in time he’ll be saved. It’s a testament to the tenacity of human life and the cruel indifference of things that watch us suffer.

Of course, Chilton is sacrificed by the end of the episode, though he’s not dead by the time credits roll. We see him, lipless and burnt, accuse Will Graham of doing this to him. In the picture for Tattle Crime, Will placed his hand on Frederick’s shoulder, making him symbolically his pet. The Dragon’s MO is to kill the pet first before attacking the owner, so to Chilton this was an intentional deflection.

At the very least, Chilton’s flaying and immolation at the hands of the beings who use him as a game piece produced what it needed to. Jack was hoping for something more direct from his plan, but he’s not left wanting. Frederick gives up the information that the Dragon is lovingly acquainted with a blind black woman. Crawford know this to be Reba, who Francis spoke to one the phone, and now has the first piece of real information that will lead to the series’ conclusion next week.

It won’t be so easy though. Reba has been abducted by Dolarhyde. In the final scene of “Number of the Beast,” Francis takes the love of his life back to this house, bound and gagged. He then proceeds to confess to her his true draconian identity. In leading up to this, he describes his confession in Biblical terms. It is ten commandments important; sermon on the mount important. He’s speaking the word of his god, the Great Red Dragon, who he at once answers to, is becoming, and to whom he has prepared a sacrifice.

The Tattletale – With Freddie having escaped the wrath of the dragon that frees her up for any subsequent stories Bryan Fuller gets to tell. If he eventually makes my dreams come true and gets a six-episode Silence of the Lambs mini-series, I would love to see how Lounds handles the Buffalo Bill case and what sort of relationship she’ll have with Clarice Starling since the man-Freddy of the books is dead well before those events take place.

The Great Escape – If Chilton succumbs to his wounds like all the man-Freddies before him, it will inevitably save him from his canonical demise. In the novels he escapes to South America in an attempt to hide from the escaped Hannibal Lecter, but is caught by the cannibal during the period between Silence of the Lambs and Hannibal. He is eaten.

Lip Service – Chilton’s overcooking didn’t completely rescue him from Hannibal’s appetite. The micro flashback of Lecter cheekily slurping up Frederick’s lip is delightfully dark comedy. Who would have thought incarceration would bring out all of Hannibal’s charming smiles?

Man to Man (Other) – From an adaptation standpoint “Number of the Beast” is extremely interesting. The scenes between Chilton and the Dragon are adapted almost word for word from the novel, but the character change really transforms the atmosphere of the whole situation. That said, if Freddie Lounds was put in his place, I’m not sure it would have worked. She is much less despicable than her male literary alter-ego and I think the brutality would have felt unwarranted.

By The Book – Since the show used the conclusion of Red Dragon for last week’s assault on the Graham house, it’s hard to predict how season three will end. What are your theories? Let me know in the comments section!