Forgiveness is a curse, particularly when it’s not welcome. To forgive is to impose a sense of wrongdoing on your subject, forcibly taking a higher ground and elevating your values as morally right. Critics of Judeo-Christian religion identify this behaviour as master-slave morality, a phenomenon that occurs when an oppressed people vilify the values of their oppressors as a form of moral definition. If your enemy is strong, you value the meek, if he makes you eat your own face, well, I guess you feed him to a bunch of pigs. It doesn’t always have to be logical, when your morals are reactionary there’s a lot of wiggle room.

Given that Hannibal Lecter has only ever been an oppressive force, and that the philosophy in question is often used by terrible people to subjugate the value systems of minorities, it should be no surprise that Mason Verger is using his forgiveness as a weapon.

In “Aperitivo”, the hyper stylized catch up episode, Mason Verger has embraced God, the risen Jesus (or The Riz as he called Him in camp), as an affront to the gnostic terror of Florence and Chesapeake, Dr. Hannibal Lecter. Hannibal sees his only true oppressor as God, so Mason has aligned himself with the celestial being that contributes all the material to Dr. Lecter’s church collapse collection. He has forgiven Hannibal for making him feed his face to Will’s dogs only because that’s how one wields his newfound Christianity as a heavenly sword.

Mason, of course, is not the only survivor of Hannibal’s attention, and therein lies the central conflict of “Aperitivo”. Hannibal Lecter has two real enemies in the world, Mason, and the pig-faced menace’s direct competition, Dr. Frederick Chilton. Like two rival sects of the same basic faith, Chilton and Verger compete for followers, both wanting to catch and keep Hannibal Lecter for themselves, differing only on what they would like to do when they succeed.

The conflict is established in the episode’s cold open with Chilton paying a visit to Muskrat Farms, the Verger family estate. Mason has established a scheme in which people who bring him valuable information on Hannibal Lecter will be paid one million dollars. As the men talk, they bond by taking off their masks. Chilton, who had been shot in the face last season by a brainwashed Miriam Lass, reveals the true extent of the damage, removing his artificial cheek bone (Skyfall-style) and contact lens that give him is normal face and a nifty new lisp.

Mason’s mask removal shows us a different kind of reveal. Sure, we get to see how his skin grafts have poetically made him look like pig, but we also get a look at the new actor portraying Hannibal’s greatest canonical adversary. Joe Anderson has replaced Michael Pitt in the role of Mason, and does such an amazing job with such iconic material, that by the end of the hour I wasn’t bothered by the change in casting. In fact, Anderson is so good as Mason, I kind of find myself wishing for a special edition season two Blu-ray with him George-Lucas-ed into the pre-meltdown Mason scenes. 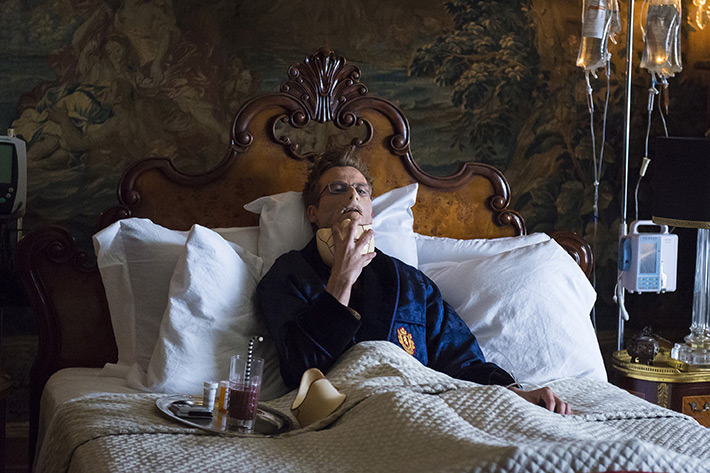 The two Hannibal haters recognize their differences and part ways, Chilton wishing Mason happy hunting. What follows is an episodic run down of everyone who survived Hannibal, catching us up on the eight months between the season two finale and the present day timeline in the show’s narrative. Each victim who isn’t dead by the end of “Aperitivo” is approached by either Chilton or Mason, as they try to seven samurai their way to their own perfect revenges.

The first stop on our trip is Will Graham’s bowels. A graphic ripping open of our hero’s stomach presents us with an even less forgiving view of season two’s final moments. We follow him to the hospital bed in which we found him earlier this season at the top of “Antipasto”, but instead of being visited by the ghost of Abigail Hobbs it’s Chilton who brings him company. Frederick tries to connect with Will empathetically, both having been maimed and framed by Hannibal the Cannibal (copyright Frederick Chilton, 2015), and though we don’t witness Graham’s final goodbye to Chilton, we do get a cartoonish vision of a second reality in which everything went as planned.

After watching Will and Hannibal, in the bad timeline, murder Jack Crawford at dinner, we follow good timeline (read: real) Will back to Virginia. In the cold of winter Graham is fixing a boat motor and Crawford comes to touch base and see if they’re still cool despite all the betrayal between them.

Jack probes Will on the reason for his betrayal. He did, after all, tell Hannibal about Jack’s plan to apprehend him. The answer is as simple as it is heartbreaking: Hannibal was Will’s friend and he wanted to run away with him. By the episode’s end, after we’ve seen Will’s slow descent into maddening grief, he takes to the Atlantic in a grand romantic gesture, attempting to swashbuckle his way back into Hannibal’s good graces.

Lest we forget that the Crawford family is the most tortured of all humans targeted by the Chesapeake Ripper, “Aperitivo” reminds us of the two victims’ suffering at Hannibal’s hands. First we see Bella, bed ridden and still alive thanks to Lecter’s humiliating coin flip from last season that motivated him to thwart her suicide attempt. She shares her hospital room with Jack, and by her segment’s end, her husband takes her soul with an overdose of medication.

The scene is as beautiful as it is torturous. The fact that Gina Torres and Laurence Fishburne are married in real life only adds to the pain as we see Jack’s memories of marriage juxtaposed with Bella’s funeral. And while all of this reads as a salient moment of real life tragedy, there is a terrible element of the sadistic here. Hannibal Lecter has spent years mocking Crawford, crushing his soul and handsomely smirking at every turn, and the master stroke on this painting of humiliation was getting him to euthanize his own wife.

It should go without saying that Chilton’s advances were not received warmly by Jack, who was forced into early retirement from the FBI Behavioral Sciences Division. 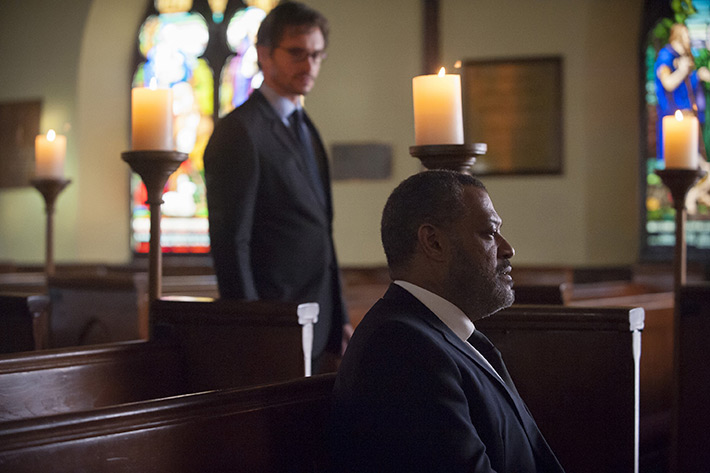 While Jack and Will both do end up drawn to Florence, “Aperitivo” suggests it is for their own personal reasons. Will is obviously searching for the man who makes him whole, and Jack is allegedly looking for Will. The episode’s focus on Bella, however, harkens back to Pazzi’s line from last week about people coming to Florence to be closer to their God. Italy was where Jack met Bella, and it is her namesake (her given name is Phyllis) – like Hannibal himself, Jack’s pilgrimage is a return home in an attempt to feel whole again.

Alana Bloom has undergone a different transformation. We see her back break after being pushed from the window of Hannibal’s second storey, and as she recovers Dr. Chilton shows up. The professional rivals spar, and Alana mentions that the marrow from her bones entered her bloodstream. The doctors say this bit of blood chemistry will change the way she thinks.

Well, those doctors weren’t kidding. Making good on Chilton’s assertion that she was responsible for her condition and not Hannibal, Alana goes to Muskrat Farms once she is able to walk again. Mason has the special distinction of having done all the most horrible things to himself under the direction of Dr. Lecter, so as the terrible pig-man’s new therapist Alana will have an empathetic client. You’d think the repugnance of a serial child abuser would foster animosity between the two new forgiveness-revenge partners, but that marrow has really changed Dr. Bloom.

The metamorphosis of Alana (the blooming of Bloom) is twofold and wholly exciting. First, Alana has become much more aggressive and empowered, not scared of old testament, Quentin Tarantino-style revenge. Second, she has become Clarice Starling, but evil. 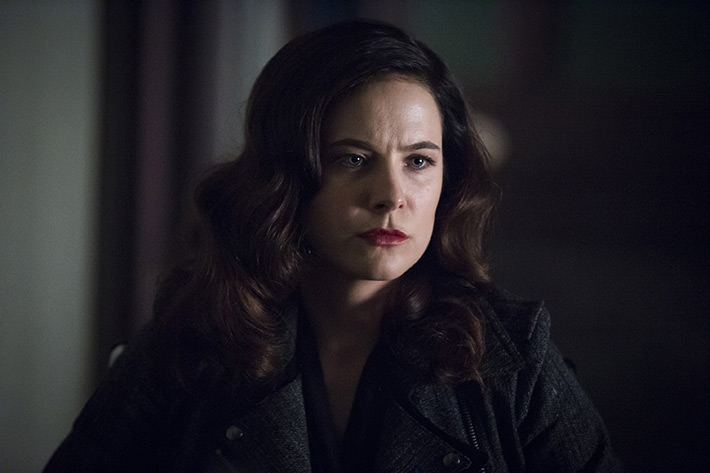 Normally I save the book references for the Recipe Box section at the end of these recaps, but this revision to Thomas Harris’s work is a very big and important step for the show, highlighted by the acknowledgement of Bloom’s transformation. Almost every piece of her dialogue with Mason and Margot Verger is taken directly out of Clarice’s mouth in Hannibal (the book). What’s so cool about this is that it’s a clever subversion of the legal difficulties NBC and Gaumont have had with acquiring the rights to Silence of the Lambs. It also elevates Alana, already a strong character in the show, to a prominent level of importance. It is at once a big “fuck you” to those who would stand in the way of Bryan Fuller’s vision for a better Hannibal Lecter mythology and a way to give one of the show’s many fantastic women a high level of agency.

With Alana “Starling” Bloom at Muskrat Farms, Mason beats out Chilton with a score of one to nothing. “Aperitivo” concludes with Mason and his new manservant Cordell making preparations to have Hannibal Lecter eaten alive. They talk about transubstantiation, the miracle of communion, which as we discussed last week, is the cannibalism that takes place once all the forgiveness is done. Sure, Mason’s fudging the rules a bit, but that’s what happens when you use reconciliation as a violent tool. When you’re oppressed, you make your own morality. Such is the power of The Riz.

Skin Deep –  While Joe Anderson’s performance of Mason Verger is much more in line with the source material than Michael Pitt’s (particularly with his deeper voice), there is quite a bit of variation in regards to the extent of his wounds. In the book, Mason Verger is described as still showing exposed bone, with blood vessels webbed over top. He only has one eye, which doesn’t have a lid and is kept moist by a monocle that automates a sort of tear spray. That said, I’m personally very happy with the pig snout Mason is sporting now.

A Match Made in Heaven – In terms of the canonical narrative, Chilton is dead by the time Mason Verger is introduced. By virtue of shuffling everything up and having to dodge Silence of the Lambs while treat the events of Hannibal as preceding Red Dragon the Hannibal Hate Club gets to have two presidents at once.

This phrase prefaces chapter four of Thomas Harris’s Hannibal and is allegedly a maxim of FBI separation counselling. The difference here is that in the book it’s referring to the FBI’s betrayal of Clarice Starling, and not its ditching of Jack.