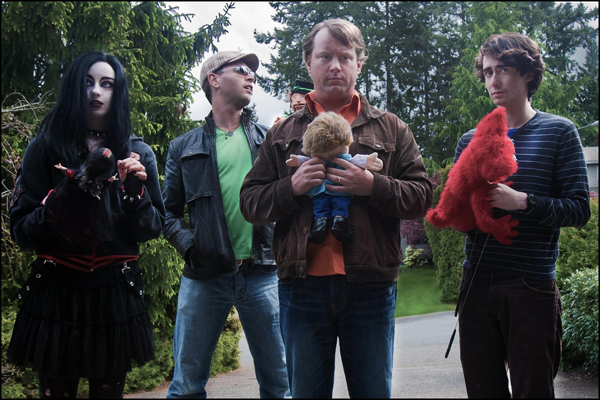 Sunflower Hour (Aaron Houston, 2011) – The naughty minded mocumentary Sunflower Hour has a killer premise and really talented performers, but it’s hard not to wonder where all the genuinely funny jokes are. This look behind the scenes at a children’s show that’s auditioning new puppeteers has a few smile worthy moments, a tiny handful of chuckles, one big laugh, and dozens upon dozens of jokes that fall completely flat.

A former porn producer (Peter New) is looking for a new character to add to his unexpectedly popular children’s television show, Sunflower Hour. He sends out his bitter wife (Johannah Newmarch) who wants to sabotage the show to audition new talent. She brings back with her to Vancouver a quartet of misfits who would never stand a chance otherwise. Leslie (Patrick Gilmore) is a secretly closeted evangelical who wants to bring the message of the Lord to youngsters. Satan’s Spawn (Kacey Rohl) is a troublemaking 15-year old Goth who wants to turn kids onto the wonders of anarchy. Shamus O’Reilly (Ben Cotton) isn’t Irish, is a terrible ventriloquist, and only allows people to speak with his hellraising Leprechaun puppet. Finally, there’s David Spencer (Amitai Marmorstein), a sweet natured rube who could handle the job perfectly if he wasn’t so shell shocked from his constantly teasing family to function like an adult.

There are only two main settings to the jokes on display in Quebec native Houston’s film: easily obvious and set pieces that feel too workshopped to death to organically feel like part of a mockumentary. Watching a character as one note as Leslie repeatedly have to deliver the same jokes and gags repeatedly isn’t particularly funny, and neither is watching David constantly get humiliated and shit on. It’s too frequently a film that confuses meanness with actual wit, but that meanness isn’t transgressive or over the top enough to be all that interesting. We get it, Satan’s Spawn is a goth with daddy issues. There’s much more that could be done with this character than just simply putting Rohl in pancake makeup and a dog collar to create a character. Similarly, there’s a much more interesting film that could have been made between New and Newmarch that never materializes, but gets hinted at throughout. Gilmore, Marmorstein, and Rohl all do what they can, and they get more mileage out of good performances than they do the material. Really only Cotton gets the chance to break loose, and that’s probably because he can bring more to his character than is written on the page. And the less said about the film having a completely wrong and unearned ending, the better.

Aside from an amusing post-hotel-orgy with Shamus that elicits a few chuckles, the film only comes roaring to life during a brief sequence where the puppeteers are forced to work together and improvise. That’s a very funny scene in an otherwise disappointing movie that clearly aspires to the same level of hilarity as Christopher Guest’s performing arts mockumentaries. Only those films had heart and characters that were more than just a list of attributes. This film is missing both of those key components.