Robot Jox (Stuart Gordon, 1990) There are few genre filmmakers as underappreciated than Stuart Gordon. His career kicked off dramatically with the instant classic Re-Animator, which proved to everyone just how funny graphic dismemberment could be in the right light. After that, Gordon’s career essentially played out under the radar, even though he hasn’t made a movie yet that isn’t compulsively watchable. Oddly, it’s likely because he never left behind the sense of B-movie irony that made Re-Animator such a success. His genre movies are always executed with a wink, delightfully dumb yet fully aware of how dumb they are and unfortunately he rarely got credit for the latter saving quality. Take his 1990 giant fighting robots flick Robot Jox, which is at once as dumb as the title and satirically aware of that fact. Few people noticed what Gordon was up to with the movie in 1990, but thankfully a few folks at Shout Factory figured it out and shoved the film onto Blu-ray in time for some well-deserved re-evaluation.

The movie takes place in a goofy sci-fi future in which war has been outlawed. Thankfully for those who love violence, there are still plenty of opportunities for international battle. Instead of going to war, countries no settle their disputes with battles between gigantic human controlled robots (sure, why not?). Russel Case plays Hercules, Western civilization’s robot fighting champion who unexpectedly falls twice to the Russian team, with the dastardly Achilles (Gary Graham) even forcing Case to kill off a number of civilians in the second loss. This causes Case to lose is robo-fighting nerve, which happens at the worst possible time since the fate of the world hangs in the balance! From there, it’s time for a classic sports movie return to power, only this time the sport involves giant effing robots. So, that’s gotta help, right?

On a certain level, Robot Jox is a pretty silly kids movie. The costumes are vibrantly bright in a garish 80s style, the characterizations are broad, the morals are obvious, and the action comes fast and furiously. But, the movie works on a few other levels. Sci-fi writer Joe Haldeman keeps sneaking serious concepts and commentary into the script that clash slightly with the goofiness surrounding them. Gordon doesn’t always balance the two tones well, yet when he’s cooking his wildly exaggerated characterizations and satirically silly staging help bridge the gap between the stuffy seriousness and the genre absurdity. When Robot Jox is working, it’s just sincere enough for kids to follow and self-aware enough for adults to laugh off the excess and get into the fun. When it’s not working, it’s at least campy enough to still be good for a laugh. 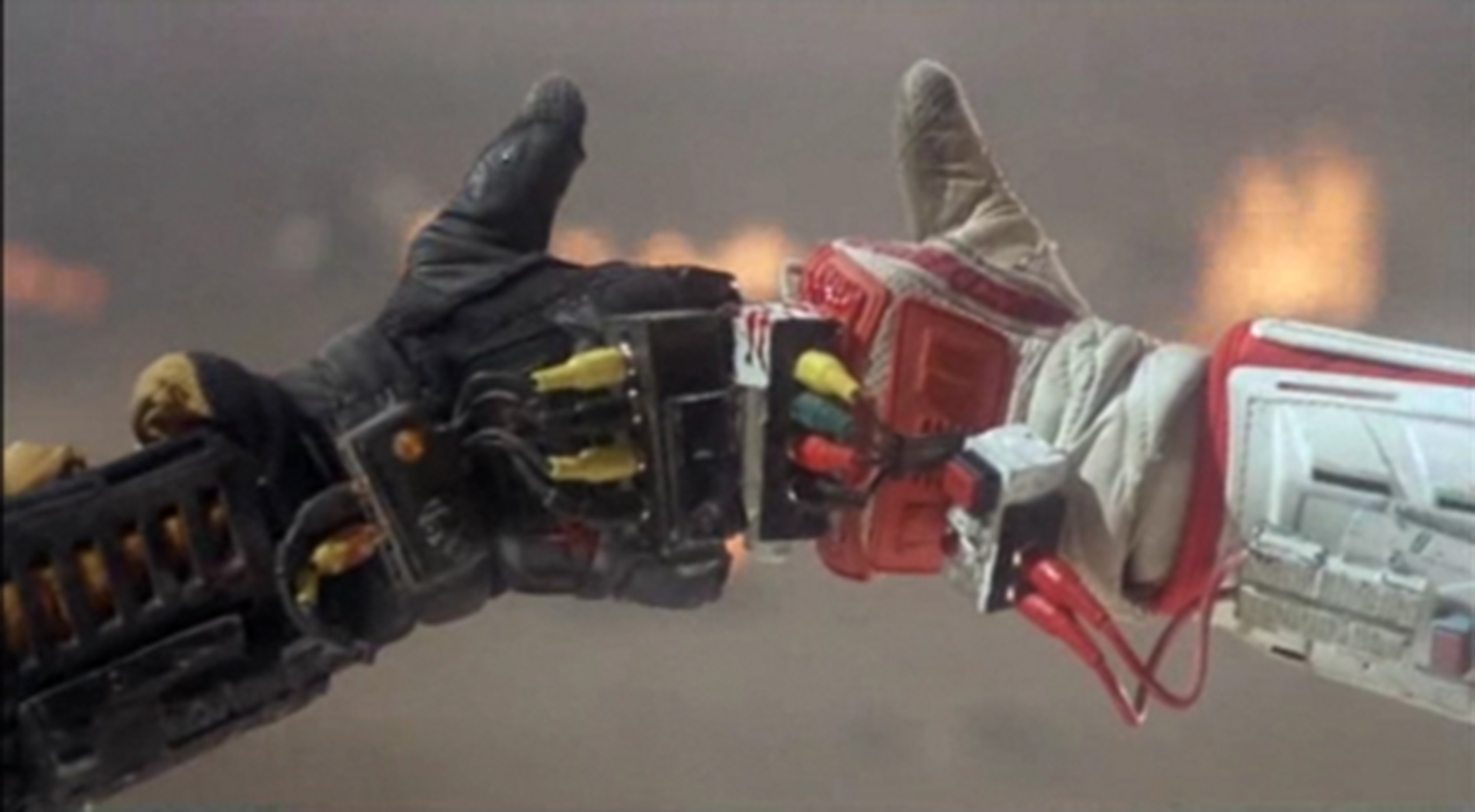 This is one of those movies that benefits from its dated qualities. There’s something charming about seeing so many skin-tight leotards, bad haircuts, and awkward melodrama play out and Gordon’ s unique filmmaking wit ensures that material plays for giggles. Even better are the Robot Jox fights themselves. Executed with stop motion, the big battle scenes probably looked a little out of fashion on release, but now feel endearingly nostalgic. The herky-jerky fights are absolutely delightful, especially when Gordon adds in some insane touches like a surprise crotch chainsaw that earns big laughs. Make no mistake, the movie isn’t for everyone. You have to have a sweet tooth for trash and an appreciation for filmmakers self-aware enough to make movies geared specifically for the irony crowd. But if that does it for you and you love stop motion, get ready to find a cult classic that you never knew you always wanted.

For a film this old and made on this tight of a budget, it’s amazing how good the film looks on Blu-ray. The production design laced in primary colors to pop on VHS looks hallucinatory in HD vibrancy and the lovingly handmade quality of the stop motion fights is only accentuated. Special features are pretty strong as well (as is the Shout Factory way), kicking off with almost an hour worth of archival interviews and behind the scenes footage, which is kind of amazing to see for an essentially forgotten film. Paul Koslo pops up for a new interview looking back at his involvement on the movie with enthusiasm and a pleasant sense of humor. Finally, there are two freshly recorded audio commentaries. The first comes from a variety of people on the effects team and is filled with some fascinating anecdotes, while the second comes from Gordon himself who looks back on the troubled production with his characteristic mix of nostalgia and good humor. Overall, it’s a hell of a package that not even the biggest fan of Robot Jox would have ever dared to dream was possible. It’s surreal to live in a time when a movie this delightfully ridiculous could get such an extensive Blu-ray revival and god bless the good folks at Shout Factory for caring so much about properly preserving trash.