Frank needs a liver. However, he isn’t the only character who has an organ in disarray. Whether it’s Doug’s cold heart, Dunbar’s sound mind, or Claire’s beautiful lips, Chapter 45 shows us many of the characters being tested to the absolute limits.

Bump In The Night

“When you know what someone is searching for, you know their hopes and dreams, what they’re thinking about in the middle of the night.” – Leann Harvey

Leann’s Internet guy tells her that the Conways (R-NY) have figured out a way to stack the search engine Pollyhop with pro-Conway coverage. The Underwood’s won’t stand a chance against this kind of mass influence.

“I can’t deal with this right now.” – Claire Underwood

It seems pretty legit that Claire is somewhat overwhelmed by the idea that her husband could and may very well may die, the pressure of brokering a deal with Russia, and she has to run across town to threaten Jackie Sharp. I mean, there’s just not enough time to worry about some stupid World Wide Web thing Leann keeps blabbering on about.

Time is not on the side of the President. Frank’s veins are still swarming with ammonia that procures sex nightmares including: intense face rubbing, laboured eye gouging, and indiscernible mumbling. It’s one hell of a scene.

The Truth Is A Lie 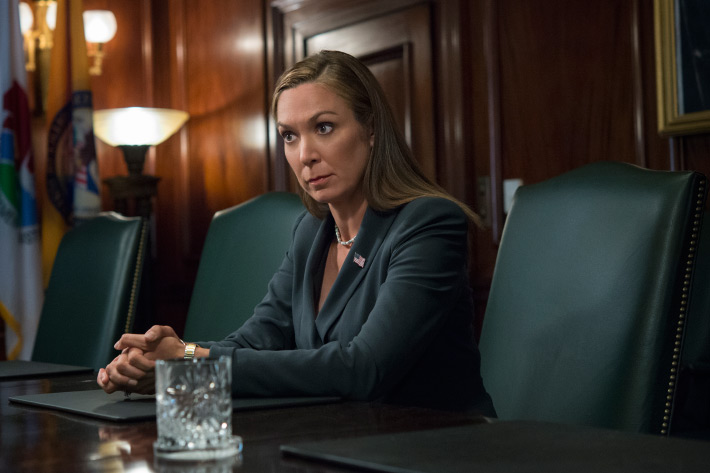 Seth’s plan to out Dunbar publicly for meeting with Lucas Goodwin, for better lack of a word, works.

Dunbar is set to be interrogated in a big shiny office (just like how she used to interrogate people!) She doesn’t want to plead the fifth, lest it make her look guilty, and Celia — in a Hail Mary attempt — is like, “Yeah, because you never met with him.” Fucking Celia, it was your goddamn idea that Dunbar should meet with Goodwin and now you’re trying to pull some Jedi mind trick shit.

Since Heather Dunbar arrived on the scene as the United States Solicitor General, she has attempted to uphold honour, integrity, and honesty. But the Underwoods are no match for her. She even stooped to blackmail that one time! And now, Celia argues that Dunbar should lie, because that’s what he (Underwood) would do — God, Celia what if he jumped off a bridge, huh? Should Heather do that too?

Celia’s nonsense sense is that if Dunbar cares about the law she has to break it, so she can become President, so she can uphold the law.

Dunbar doesn’t go for it, appears without a lawyer and releases the tape to the media. She tells the world how she is being politically sabotaged, etc etc, aka: The Truth.

The truth shall not set you free, but instead it will make you seem like a guilty, see-you-next-Tuesday who’s going after a man’s reputation while he’s down. Everyone watches as Dunbar’s political career withers and dies on the TV screen.

After Celia’s boss commits political suicide, she gives her ol’buddy Seth a ring-a-ding. She inquires if there’s perhaps a position for her on the Underwood team, as the Dunbar ship gloriously sinks into the ether. Seth subtly lets her know that there is no such opportunity for her employ, “I’m hanging up now.”

Seriously, how cold is it in that shade Celia?

Doug waltzes into the Secretary of Health’s office and threatens to fire the whole department if they don’t let the man who sits on the top of the liver donor list die so the President can live.

The SoH is mortified by his request, but Doug is willing to open that door.

Who’s not willing to open the door is Danny, a young boy who shoots himself in the face while his mother stands helplessly on the other side of a locked door. Teen suicide equals presidential survival, and so goes the circle of life. 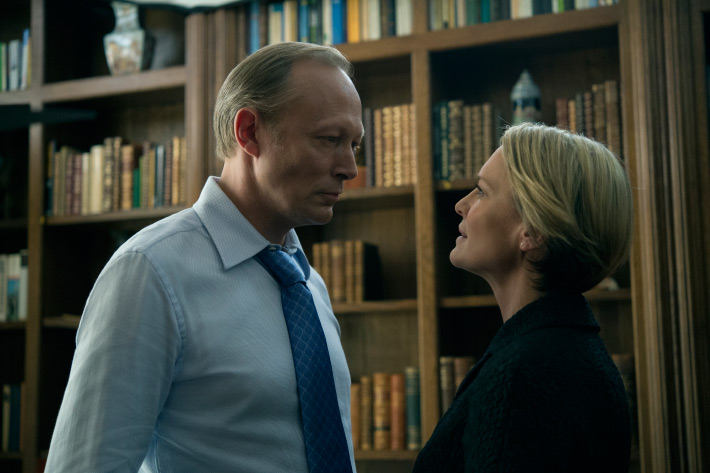 Claire won’t be there for the surgery, because she’s off to Germany to the G7 Summit where she has to convince the President of Russia to take the Chinese-American debt relief package. Kathy is not on her side, and has been fighting the plan all the way. I mean, Cathy is the Secretary of State, and she does have more experience than Claire. But what cathy doesn’t realize is that what Claire lacks in delicate negotiation tactics, she makes up for in basically telling Petrov to suck a dick.

And she succeeds. Despite Petrov’s stubborn attitude and sexist remarks, Claire convinces him to agree to the plan. All the while, she’s playing phone tag with her husband who’s woken up from surgery and is being moved back to the White House.

When Claire gets back she takes a nap on the love seat at the end of her bed, waiting for yet another man to approve her plan—her husband who the last time she spoke to she had threaten to leave and publically destroy.

“Help me up.” — Frank Underwood

Frank, coming out of the worst trip he’s ever had, realizes how brilliant his wife is. Not only that, but that he could not, and does not want to go around Machiavellianing without her.

“It was hard. Harder than I thought.” Says Claire. And so, Frank and Claire strike a deal to be running mates: husband and wife as President and Vice President.

So the gang’s back together, and Team Underwood is hitting back hard with a Us vs. Them team spirit.

Out Of the Oval

Dreamscape – Frank killed Zoe Barnes by throwing her in front of a moving subway car. His sickness-fueled dreams include a hallway of the White House transformed into that of a metro. His image of Ms. Barnes is a hybrid of both Zoe and his estranged wife. A wolf in even bigger wolf’s clothing, so to speak.

Peter Russo’s there, another victim of Frank’s homicidal tendencies. He bangs twice on the desk of the dream Oval Office — so does that make Peter Frank’s daddy, or Frank himself? Dreams are weird.

Jackie, Oh – Jackie’s pissed at Remy for brokering the deal between Tusk and the Chinese, and basically killing her Bill. When Remy tells her that he was forced because Claire has proof of their affair, she freaks the fuck out and ignores his calls. Seriously, she needs to figure her stuff out because Remy is the most delicious man on the Hill.