There’s a woman in the White House. A stand-in President that is, but nonetheless writing the words feels somehow cathartic. Madam Acting President is handed over the security codes and Claire gets some major decision making moments under her belt.

Despite the futuristic sounding gender of the POTUS, this episode of House of Cards proves the past is creeping up on many of our major players.

With her temporary powers, Claire grapples with the reality her husband’s chances at winning this election are dwindling. If his meeting with House Majority Leader Rasmuseen is any indication, Claire’s fears may be justified. When given names to initial for high level security clearance, her pen wavers over the name Frank Underwood. She finally signs, but this could be a harbinger for an exchange in their power dynamic. She flexes her newly found power when she decides to make a deal with Usher that she’s willing to concede the VP position against Frank’s consternation.

Tom Hammerschmidt fires Sean Jefferies after her realizes he’s read his notes and went ahead with the meeting with Lisa Williams. Hammy dismissed the woman’s claims Doug Stamper had something to do with Rachel Posner’s disappearance, based on his intuition that she’s just a junkie looking for money or fame. He wasn’t wrong about her drug addiction, but that doesn’t mean she is wrong. Hammy might have chucked his nosey underling, but that doesn’t stop him from digging a little deeper into the story. He goes to the storage unit of Zoe Barnes’s belongings and finds Zoe was looking into the Doug/Rachel connection as well.

Seth’s also onto Stamper, creeping through his call list and figuring out there’s a connection to the name Moretti. Now it’s just a race to see what murder Doug gets found out for first—Rachel or Anthony.

The Emperor Has No Clothes 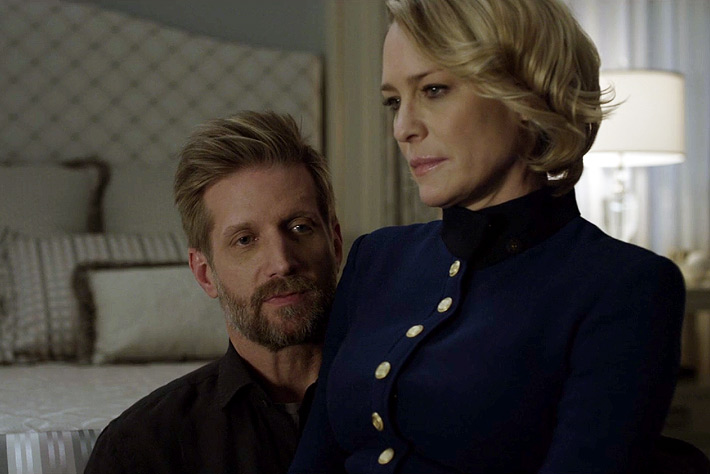 “It’s all about listening to your body.” — Eric “Augustus Incarnate” Rawlings

Tom crashes a White House tour when the guide mentions the story of FDR, a President, who physically weakened by the effects of polio, was the mostly got around by means of a wheelchair. An “open secret” in the White House given that President’s must at all times be seen as physically strong. Tom’s quick to point out the collusion of other politicians and the people to ignore or deny FDR was handicapped in anyway — the emperor has no wheelchair type situation.

Despite the Hans Christen Anderson allusion to sartorial delusion, it looks like Tom and this lady tour guide willingly take off half their clothing to fuck on a podium. He tries to chat her up about Lincoln and she’s like, “Can we not, this pulpit’s turning into a Slip ‘N Slide.”

Speaking of clothing choices, Claire creeps from her bed in full white satin jammies to take a gander at the most high level security information while she hacks a dart on her lonesome in the Oval Office. The scene reflects an earlier conversation about “being in the moment” she had earlier with Tom. Her late night pajama party also indicated Claire has internalized the comments and encouragements of those who want to see her as President for real.

“He won’t listen to me.” – Claire “Tell Me About It Sister” Underwood

Russia’s taken over a research facility in Antarctica in an attempt to find oil in the region. Cathy’s sent to figure out some sort of deal, but the newly bearded Petrov has an hidden ace in his deck when it’s revealed he’s acquired one Aidan Maccallan who is the keeper of the Underwood’s deepest, darkest secrets. It’s already been leaked the gas station was a red herring and Aidan is a very big asset to the Russians.

Hannah is doing everything in her power to keep Will sane with the mounting stress of the uncertainly of the campaign. His frustration is peaked when he’s obviously lead on by the Black Caucus who has him wait over an hour for his meeting. The situation devolves into palpable tension and Conway’s Jerry Maguire style, “I want to help you help yourself” does not play well.  An ironic statement, given Conway’s unable to take heed of those around him to prevent his—what appears to be inevitable self-destruction.

Conway lashes out at Usher who’s having none of this bullshit and warns if he’s ever spoken to like that again he’ll have his career. Unable to bully anyone else on the plane, Will’s like, “I know I’ll bother the help.” He asks to fly the plan citing he’s had one under his control before and was even shot at whilst flying. The pilot’s unable to give him permission and he freaks the fuck out, “You’re going to flip me those mother fucking controls.” However, the only thing that’s being flipped his Conway’s shit and Usher gives this very bad boy a TIME OUT.

Virtual Realities – Both men vying for the POTUS position have their gizmos of choice. Frank’s got his brand new personal trainer Eric (aka Augustus… also CALLED IT) with a stationary bike quipped with a video game like interactive trail.

Will’s using the therapeutic VR machine to bring him back into active duty mode. Hannah looks on to her husband’s late night warring with a definite look of concern. What really happened that day he earned his purple heart? It’s most likely going to be revealed closer to the finale, but my interest is peaked.

Only Acting – So it looks like Usher might be on the side of the Underwoods, and Brockhart is realizing he may be headed for the glue factory (metaphorically speaking), but as we know it HoC, no one is loyal and it’s not over ‘til it’s over.