Well whaddya know, I guess a politician can be bumped out of the public favour with an incriminating recording — well I mean, as long as its not about women ‘cause, you know, that’s pretty much okay. Yes, friends the Underwoods have gone and done it by securing both the Presidency and Vice Presidency. With the help of said incriminating audio the decision came down to the Electoral College (sound familiar?). Now on the day of the Underwood inauguration Claire and Frank wonder who they can trust.

“You can go fuck yourselves” — Will “Sore Loser Much?!” Conway

Will Conway calls to congratulate Frank in maybe not the most sincere way. Frank busts his chops by offering him Minister of Transportation, which is basically like telling a surgeon they can now work as a butcher. Claire and Frank toast with some champagne and Claire tries to remind Frank to live in the present and enjoy this moment.

However, the moment is fleeting for the Underwoods as there is always work to be done to stay on top. Perhaps even Frank knows he’ll have to keep an eye on his own wife. During the firing and re-hiring of his Cabinet Frank monologues at us about how he owes Claire, “I owe her more than I would possibly fathom… and she owes me.”

“Not true,” says Claire to the room in a very cleverly blocked scene where the allusions to Claire’s ascent to power are getting stronger than ever. All these little teasers of Claire looking at the camera, almost having the same 4th wall privileges as Frank are getting more and more potent. Especially during the inauguration wherein Claire looks at him; now is this because she is looking at him in “real life” or is it more than that? We’ve yet to be instructed what the rules are for Claire, and the most exciting thing might be that there aren’t any.

Changing of the Guard 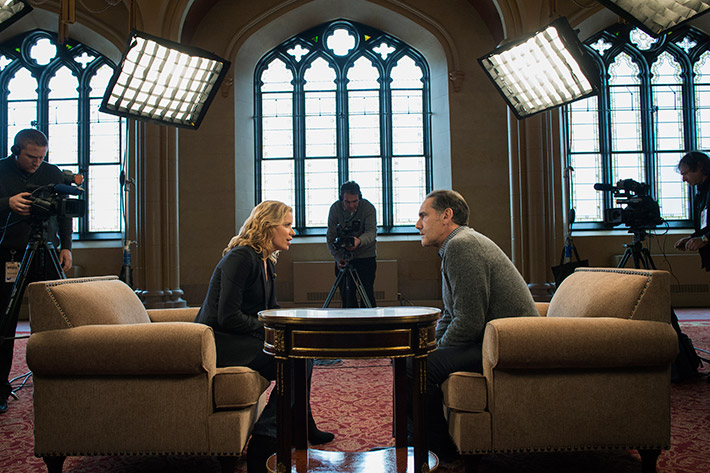 Doug has finally gotten rid of stupid Leann because of the whole Aidan thing and now he has to play with another kid?! “Are you freaking kiddin’ me?” asks Doug as he holds his breath for like 5 minutes after Frank and Claire tell him he has to play nice with Usher.

Leann knows she on the outs with the White House, but she still has to figure out how to get Aidan out of Russia in one piece. I feel like trying to give Leann some sort of emotional investment and depth is a great idea for her character, but every time she talks about Aidan or to him, I have to keep reminding myself why she cares so much and I just don’t feel like the stakes are as high as they are supposed to seem. Leann tries to set up an interview with our own friend Kate Baldwin, but after she gets the how Russian Room Roulette treatment, Aidan is ushered off to the Jordanian Embassy.

“Everyone becomes a problem eventually.”— Frank “No New Friends” Underwood

You have to give it to Romero for his thubthumping ‘tude. He wants two seats at the inauguration as well as a bump to Medicare in his State. He gets the front row seats thanks for Usher, but Frank’ll be damned if he gives this traitor what he wants.

“You made this bed America. You voted for me. Are you confused? Are you afraid? Because you what you thought you wanted is now here.” — Frank “Maybe Kinda Reminding Us Of Someone Else We Might Know” Underwood

Frank can’t find the “F” cufflinks for his suit, reminding us of his dear departed Meechum. For folks like the Underwoods who demand absolute loyalty, Edward was the perfect third. That’s not to say Frank’s not getting a little side action from another gentlemen in his employ. Frank hooks up with  his personal trainer/impersonator of his great-great-great grandfather in a staircase of secrecy after almost choking him to death. Seems like a perfectly normal thing to do.

“Something terrible always happens when I go to a party.” — Jane “Def Carries A Puffer” Davis

Claire’s side boy Tom is starting to get weary of his place with Claire. His friend Kate even points out he’s a shadow of his former self. He resigns as speech writer and Claire accepts, except they’ll have to make up a reason why he’s there all the time. There’s a really hilarious moment Augustus stand with Tom and asks him what he does there. Little does he know that he’s speaking with another mistress of the House. Another conversation that’s particularly notable is Frank calling out Tom for fucking the tour guide in the pressroom. “Don’t cheat on my wife” warns Frank.

Whilst the Underwoods bask in the glory of their new power, and wonder who it is they can trust, Hammerschmidt makes a huge stride in his case when Mr. Barnes hands him the cell phone Zoe used to call the President. Despite the fact Claire insists everything is going to get easier from now on, there are some skeletons in the closet that would prove this assertion wrong.

Jane Doe — What do we really know about Jane? She says she works for everybody and is obviously neurotic and superstitious, but I think if Claire plays her cards right, Jane could be her biggest ally.

For the Queen — I loved the moment Frank gives us the little tidbit about how power is like real estate and gives the little Queen wave. There’s a lot to be gleaned from the rise and fall of the British Empire and how that relates to the United State.