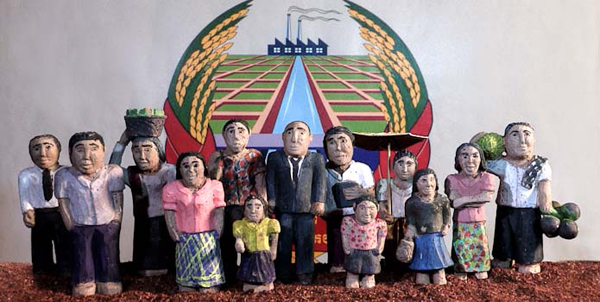 Nominated this year for Best Foreign Film at the Oscars (but strangely not for Best Documentary, where it also could have been a contender) and winner of the Un Certain Regard prize at Cannes last year, Rithy Panh’s multimedia look at the devastation caused by the Khmer Rouge during the Kampuchea Revolution in 1975 and the subsequent “democratic dictatorship” under Pol Pot that ensued is a wholly original and heartbreakingly personal look at the Cambodian experience during one of their darkest times.

Blending narration, sometimes stomach churning archival footage, and delicate, intricately constructed clay dioramas, sets, and figures, Panh traces a country’s uncomfortable and tragic loss of personality, hope, and general well being with a heavy heart and a respectful artistic eye. The topic of genocide is hard to convey without ever feeling like a part of the story is missing, but despite losing a wealth of voices that could have told the story from their perspective, Panh looks back with the eye of a world weary survivor that wants to ensure that something like this could never happen again. Let’s hope this film helps to succeed in that. (Andrew Parker)