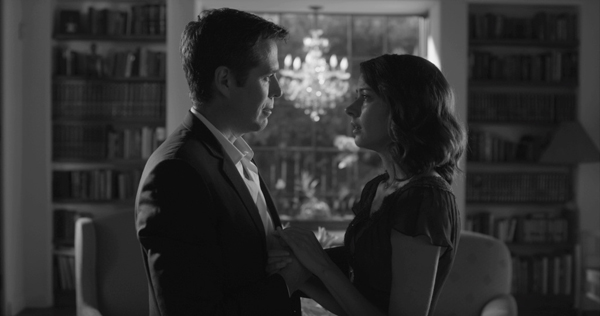 Alexis Denisof is almost too grateful and genuine for words. He starts off our phone call asking where I’m located, and when I tell him I’m actually taking a couple of minutes out of my vacation to talk to him he’s taken aback and almost too grateful for words that I would take some time to talk to him. The feeling is a mutual one as most subjects aren’t as humble and gracious over the phone as he comes off.

He’s calling up to talk about his role as the gentle jester and adamantly single Benedick in Joss Whedon’s already quite beloved Shakespearian adaptation of Much Ado About Nothing (opening this Friday in Toronto and elsewhere in Canada later this month), one of the Bard’s more outwardly cynical romances filmed on a lark at the director’s own house with a cast made up largely of friends and former co-workers.

Denisof and Whedon go way back. He (along with wife Alison Hannigan) are the godparents of one of Whedon’s own children, and they have worked together on several projects. The best known of which would be his portrayal of vampire slayer trainer Wesley Wyndam-Price from both Buffy: The Vampire Slayer and its spin-off Angel.

Working with Whedon wasn’t new territory for Denisoff, and neither was tackling Shakespeare, with the actor doing a bit of stage work with the Bard early in his career.

We talked about coming back around to his roots, Joss’ unorthodox approach for this staging, and how the friendships of everyone involved strengthened the final product.

You actually started off coming from a Shakespearean background. Now some actors relish the chance to always return to doing Shakespeare, while others want to avoid it like the plague. Before doing Much Ado About Nothing with Joss, which camp did you see yourself falling into? 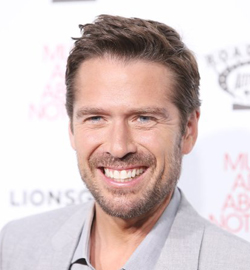 Alexis Denisof: I would say I always wanted to come back to it. I certainly wouldn’t ever say it was an easy choice to make or something that’s ever necessarily easy to do I’ve always had a fascination with the themes and storytelling in Shakespeare’s classics. There’s something special you can always get from standing on the shoulders of the greats, and you’ll get something special when you go back if lucky as an actor. It doesn’t always pan out, though. You don’t always crack it the first time you have a go of something and sometimes you just never do. It’s an almost Everest like challenge and slope that’s equal parts terrifying and fun.

You hadn’t previously done Much Ado on stage, so how familiar were you with the material going in?

AD: I had seen it done on stage years ago, and I had seen the Kenneth Branagh film version. Then came the time when we all first read it read at Joss’ house few years back. I had never been in it and I was always thrilled by and always loved the world of this play.

Were you ever sceptical of Joss’ less-is-more approach on this one and trying to mount an entire Shakespearian production at his house?

AD: That was never going to be an issue to me. I have complete faith in Joss, and I’ve been fortunate enough to work with him a few times now. I know from seeing him work and seeing how he thinks that he can pull off anything sets his mind to. So it all started with having someone that great in the first place. As for shooting at his house, I had been there plenty of times before and I just knew it would be a beautiful set. Finally letting me act alongside the wonderful Amy Acker as the other lead made it the perfect trifecta. It wasn’t  just a comfort thing to be there, but sheer joy. There was just so much going in that was so appealing to me that it was a no-brainer.

In my mind, no one was ever questioning if this was going to be a success at all. We just did what we could and we all brought our best to it. We all agreed and had an alliance on feel and style that Joss was the arbiter of: this romantic, film noir quality. It’s important when it comes to doing material this well known to keep it fresh and try different styles. It’s also in prose and not iambic pentameter, so frees you up considerably more to give it a contemporary feel. All of the low key nature of the film just sort of came naturally, but I also think that’s what’s the most fun aspect about it.

You know first hand that when it comes to Joss’ track record that his fans always have a high level of expectations. What has it been like being a part of a production that a lot of people might see as a bit of a departure for him stylistically?

AD: From what I can tell they love it. Anything Joss does now is always going to show up with excitement and high expectations, and you can’t please everyone all of the time. But the reaction has been really great and I think people are really getting what Joss was getting at here. Some of the fans I’ve talked to are pleasantly surprised, while others aren’t surprised at all. They know he has a way of bringing his unique interpretation and voice to everything he does.

Also, if you really look at it, Shakespeare isn’t too far from what he’s all about as a writer himself. Joss has always been unafraid to move swiftly from tragedy to comedy or the other way round. Also, both Joss and Shakespeare convey powerful reflections to the particular conditions of their own times.

Since you’re worked with a lot of the cast and the film’s director before, was it strange to do a film where there was this big family kind of feeling on set and you were doing this play that has a bit of a cynical edge to it?

AD: I think that anyone who knows Joss knows he has a kind of wonderful cynicism to him already. He has this unique balance of snark and heart. He’s a man of principals and foolishness. I can’t think of a better kind of mind to balance out this kind of material on this sort of a scale and on this kind of project.

Next Article »
Interview: Steve Niles on Breath of Bones