Two weeks ago, the Globe and Mail published an editorial titled “Assassin’s Creed III videogame distorts history.” The op-ed argued that the latest mega-game from Ubisoft Montreal distorts the historical facts – primarily by suggesting that a Native American Assassin would ever join the cause of the American Revolutionaries against the British Loyalists.

“Assassin’s Creed III is set in 1765, and promotional material describes how, as ‘a Native American assassin, (you) eliminate your enemies with guns, bows, tomahawks, and more!’ To suggest indigenous peoples rallied to the side of the colonists in their fight for freedom grotesquely twists the facts,” writes the Globe, seemingly taking all of its information about the game from press releases and promotional material.

The article is filled with inaccuracies both about the Revolutionary War (Native Americans often found themselves on both sides of the war) and the game itself – for one, the game’s storyline spans several decades in and around the Revolution, including a long prelude during the French and Indian War.

The article was widely mocked online, becoming one of the most-read on theglobeandmail.com. The Twitter hashtag #GlobeEditorial became a trending topic in Canada, where gamers and other readers posted satirical “historical inaccuracies” as portrayed in several other video games.

We’re not going to go in-depth on the problems with the Globe’s editorial – many others have done so quite admirably. Instead we talked to Maxime Durand, Ubisoft Montreal’s team historian for Assassin’s Creed III. He declined to comment on the Globe’s editorial, but spoke at length about how the team weaved historical fact with the fantastical fiction of Connor Kenway and his present-day descendants.

What about the Revolutionary War made it appealing for a setting in the Assassin’s Creed story?

The American Revolution was a great new setting because it was a period fairly unknown and it was underused by the entertainment business.  The last major product that went out about that period is Mel Gibson’s The Patriot in 2000, and it focused mostly on the southern states, while ACIII is fixed on the Northeast. The TV series John Adams is worth mentioning as a more recent example, but did not reach as large an audience. 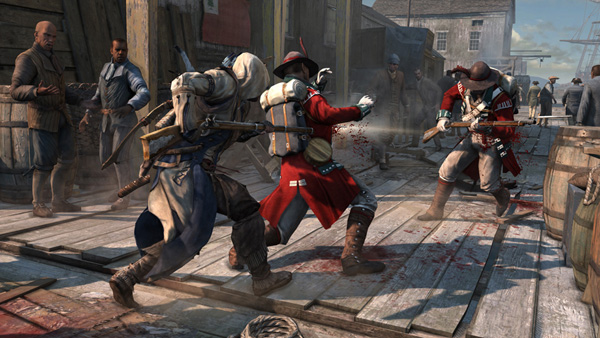 Also it was a way to talk in-depth about a story that everyone knows by bits and has heard about: most people know figures and events such as George Washington, Benjamin Franklin or the Boston Tea Party. Finally, the fantasy of going into the great wildlife and encountering Native American tribes is simply very appealing to anyone.

Since the beginning, the development team knew it had to beware of the use of history and the different points of view to interpret United States’ founding history, but also a conflict which started the decline of England in America and the fall of the French monarchy.

We read a lot about the events, of course, but also about the way history is told (it’s told very differently today than it was, for example, in 1957’s Johnny Tremain, a Walt Disney movie about the American Revolution in Boston). We did want to recreate key historical events, such as the Boston Tea Party and the Boston Massacre. But we were also interested in bringing to light some unknown events and characters — Major Gen. Charles Lee or the New York Burning of 1776 — and the context which led to the American Revolution itself.  This is also how we introduced the Braddock Expedition and the Battle of the Monongahela, two fundamental pieces of both American and Canadian history.

What was the process in creating the locations in the game? Did the team study street layouts, architectural styles etc. for this game, and how long did it take to do so?

The production team has worked on this game for about three years, two and a half of which were spent with a professional historian and a team of consultants made of professors and Kanien’kéha consultants. At first, we built timelines on details of historical characters and events. It helped us forge what in the historic lines would match with the fantasy of Assassin’s Creed, which is really about the fight of two fictive secret societies; the Assassins and the Templars.

When that was done, we could decide which cities should make it into the game because of their relevancy. Boston and New York were of such relevancy and that’s when we started studying their layouts and details. That’s also when we cut off Philadelphia, because the grid layout was visually uninteresting for a video game, even if the historical relevancy was great.

Using old maps, texts, books, paintings, anthropology and others, we were able, for instance, to match Boston’s old topography with the different hills: Fox, Beacon, Pemberton, Copps and Fort.

Choosing and building both landmarks and generic houses was another challenge. We did a lot of research precisely on the story of different key buildings of 18th century Boston, such as the Old State House. However, we also had to understand the different architecture styles which would be used to recreate more generic buildings. With these, we respected the different wards in the city and the general layout, but we didn’t go in as much details as with the landmarks. Where there was a tavern, a church or an outside market just to name these few, we built one, either generic or specific (e.g. the Green Dragon Tavern).

Finally, the fact that we matched the layout permitted us to create missions that respect the historical events. In the Tea Party mission, for instance, we begin at the Old South Meeting House, where people gathered before going to the docks to cast the tea boxes into the Boston Harbour. The overall experience is coherent.

What effect (if any) does writing the historical annotations in the voice of Shaun Hastings have on the game’s creative vision?

Assassin’s Creed 3 is a game developed in more than six studios around the world by a team of multiple cultural and religious beliefs and shows a wide variety of interpretation.  This is the first disclaimer shown when starting the game.

Shaun Hastings is the in-game fictional historian.  Through the technology called the Animus, he talks to the main character Desmond which envisions his ancestors’ past – which in Assassin’s Creed 3 is Connor.

Interpretation of history is obviously something really important and Shaun plays a part in that.

As for the siding between Rebels and Loyalists, we have been very cautious in favoring neither side of the war and instead focusing on showing the strengths and weaknesses of multiple key historical characters, such as Benjamin Franklin and Samuel Adams. We wanted to show their human dimensions in more depth, but also to let players experience these great moments of changes in their contexts and the main events of this Civil War.

Connor is present to see the views of several protagonists, but also sees the dissention inside their camps (such as the Conway Cabal). We did our best to make sure we would portray them accurately but with enough liberty as to be entertaining.

When we felt this was not explicit enough during the game, we made sure Shaun would focus on that, but with his British perspective and dry humour. Also, he enables us to let people know of some common historic mistakes. One such is the Battle of Bunker Hill, which was really the Battle of Breed’s Hill, or the Battle for Bunker Hill.

Also, since ‘’nothing is true, everything is permitted’’ (that’s the Assassins’ motto), we always encourage our players to look for more information on their own about the American Revolution and to fact-check our work. We now even have a deeper online communication hub with our fans at ACInitiates.com.

How “far” are you willing to bend what we understand as the historical fact when making it a part of the Assassin’s Creed storyline?

Since entertaining is our main focus, we’ve decided that at some points focusing on the fiction could help us a bit. With a fictional main character which is also an Assassin, we had to find twists to make him participate in historical events. This is how we can explain who shot first during the Boston Massacre or how guards were kept away from the harbour during the Tea Party. We also have technical limitations which could not permit us to recreate every bits of history perfectly; some concessions needed to be made.

While the team working in this game has been very serious in its historical approach, the main goal has been, and will keep being, the entertainment of millions of gamers.

What kind of research was done for the costume design of the game? Soldiers, civilians’ dress, adapting the fashion into Connor’s Assassin garb etc.

Creating costumes for a game like this answers different needs. For key narrative characters, we’ve build a visual database for our different historical characters to portray them truthfully and in a way which would talk to the players. Who would imagine George Washington without his hat, white hair and his blue-golden coat, or Franklin without his glasses?

For key fictive characters, we used more marginal historic elements which could not be found in either enemy archetypes or generic crowd life in the cities, so that the player can recognize them more easily. Connor is inspired by some historic elements, but is true to the Assassins’ general appearance.

For troops and city folks, it might sound too easy (which it wasn’t), but we used encyclopedias and period engravings. There are a lot of recent and very detailed resources about militias and troops. They helped us to see the different guard archetypes which we could use in the game and that would make daring opponents for Connor. For instance, drummers are snitches and will flee any combat to alarm other guards, while frontiersman and grenadiers are front-line troops ready to stand their ground.

We also used 18th century encyclopedias to recreate folks in the cities. We could see and recreate their jobs and their daily tools. But we also needed to understand the mentality of the period, and books or scientific articles were very useful for that. Some people will care about this, others won’t. Some elements in the crowd will react and join riots, others will continue their way.

And since we care so much about details, we even integrated dynamic backtrack language for the crowd life. This means that when, for instance, you have finished playing an historic event – say the Encampment at Valley Forge – people on the street will sometimes talk about it when you get close to them.

Also, their language, reactions and insults are based on 18th century slang and vulgar dictionaries and text extracts from the period. This is true even with key historical characters. For Charles Lee alone, we had pages filled with his insults and ways of talking, because he wrote as he spoke. Let’s say he was very free-minded.