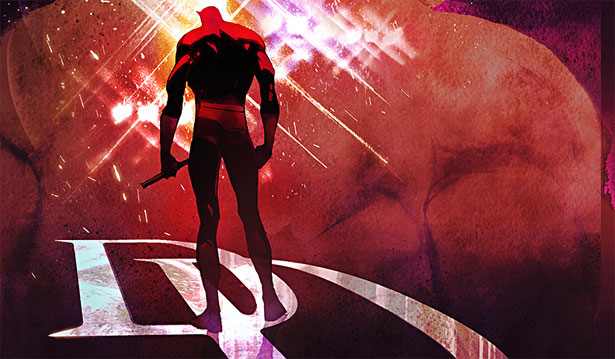 Sometimes the universe conspires to bring together the perfect storm of collaborators for a comic. A dream team of creators who could singlehandedly sell a series by having their name on the cover, yet they’ve come together as a group to make something truly unique. Patiently building the story through years of collaboration, and drawing from their shared affection for this protagonist, they’ve released a series that is equal parts love letter and eulogy. This is Daredevil: End of Days, the final chapter for Matt Murdock, crafted by a team that has already made indelible marks on the characters history. Co-written by Brian Michael Bendis and David Mack, with artwork from Bill Sienkiewicz, Klaus Janson and Alex Maleev, their combined influence on the Daredevil mythos is staggering. Janson inked (and later pencilled/coloured) Daredevil from 1975-1986, Sienkiewicz teamed with Frank Miller on the iconic Daredevil/Elektra: Love and War graphic novel, and Bendis won several Eisner Awards for his run on the series with Maleev and Mack. They have returned with End of Days to pay their respects to a character that shaped their careers.

We spoke with David Mack before the hardcover edition’s release, but recently had a chance to chat with Bill Sienkiewicz about his work on the series, and what it was like to shape Daredevil’s world one more time.

Dork Shelf: How did you become involved with Daredevil: End of Days?

Bill Sienkiewicz: It was a project that was always intended to feature creators who had more than a just passing history with the character. Specifically, creators who had invested quite a bit of time, energy, and no small degree of sweat, into shaping and interpreting Daredevil, his world, and characters in it. Put another way, the basic criteria was to have folks involved who enriched the Daredevil canon.

DS: Did you approach Daredevil differently than you did when you originally worked on the series? Has your opinion of the character changed at all?

BS: Like riding a proverbial bike, or falling off a horse, or falling off a bike-riding horse, I only approached Daredevil differently in the sense that I was acting in the capacity as finisher over Klaus’s pencil breakdowns, and not as the penciller/inker/solo artist. That said, the artists (Klaus, David, Alex and I) were all given chances to play and contribute more personal visual notes via flashbacks, pinups, and covers. So there was the story, the narrative, and there were those contributing ‘asides’.

My opinion of DD is still the same: he’s a great character with a really interesting history, a really cool origin, skill-set, conflicts, and world.

DS: How would you describe working with this team of collaborators?

BS: About as close to the textbook definition of a ‘Dream Team’ you can get, without actually having our group photo next to the phrase in the Dictionary.

DS: What were your favourite moments, both in terms of story and art?

BS: I love the entire arc. It’s such a love letter from all of us to the character. All of it. As far as my specific favourite contribution, I have to admit the rear shot of Kingpin in his penthouse was a lot of fun to do. It was a bit out of context from how he was portrayed in the pages by Klaus and I. It was a little nod to that specific look, to that specific era. The Love and War monstrosity Frank Miller and I did.

BS: It’s been simply amazing! We’re all pretty blown away by the public and critical response, and response from other pros. We are also huge fans of each other’s work, both our individual and collective contributions to the series. It’s a finely tuned machine. A band. We supported and inspired each other through the entire process, which was literally “years in the making.”

There were times early on when I wondered whether the project would ever see the light of day. I knew everyone involved had their workloads and crazy schedules, including the editors (and this project went through more than its share of them), but everyone involved all along the way contributed to its success and realization. But it was clear that everyone, and their schedules, would have to be corralled and focused on completing the project at a steady reliable clip once it was finally, actually, put on the schedule. But it was never a question of whether it was good or not. My concern was that it was too damn good NOT to reach the readers’ eyeballs.

So we kept each other pumped and excited, and were there as support, especially at the very end, as each of us crossed the finish line.

DS: With 24 pages of bonus material, what can fans of your art look forward to finding in the hardcover edition?

BS: That’s a good question. Ironically, the project went from having the luxury of being years in the making to “we can’t possibly be about to miss the deadline for the hardcover…” At the end it was everyone pretty much scampering and throwing various images on hand into the mix that might possibly be of interest. It’s sort of a blur. Personally, I’m just excited to see what the other guys have put into those bonus pages. Then I can look at it and say, “Argh! NOW I know what I should have put into the hardcover… If I’d only had a few extra days”.

DS: David Mack mentioned that he kept the ending of the series a surprise until it was time to draw it. What was your reaction when you learned what Mapone meant?

BS: I responded first as a reader to the ending. “Damn!!! Now THAT’s a payoff!” I was giddy, especially after working on it for all those years. It was gratifying, and my immediate follow-up response was that of a contributor, “I must do everything I can not to muck it up.” To make sure that I did what was necessary to give the reader the best, most unimpeded path to that level of satisfaction. Ensuring that the trip was worth their time and emotional investment. To go that far and then drop the ball, well, that was not an option.

The Hardcover Edition of Daredevil: End of Days is available now from your local comic book store.