Time travel is a difficult plot device to pull off, but Comeback makes it look easy. A book unlike any other comic out there right now, Comeback is a gritty detective tale with a sci-fi twist. Reconnect is a mysterious agency that will transport your lost loved ones from the past to current day — at the precise moment before their death so they’re still recorded as legally dead — all for a nominal/exorbitant fee. Then again, what is a fair price to save a lover, sibling, or parent from their demise?

A series that isn’t afraid to pose difficult questions, Comeback is the creation of Ed Brisson, with Michael Walsh on art and colours by Jordie Bellaire. We had a chance to chat with Brisson and Walsh about the final issue out on March 20th, how they started working together, and what they’ll be working on next.

It’s immediately apparent that Brisson and Walsh have a great rapport together, the result of having worked together in the past. Brisson explains, “Michael originally hired me to letter a pitch he was doing called Delta. I really liked his artwork and asked if he’d be into doing a Murder Book story after that. We were working on a pitch called Five Years, that was basically a five issue Murder Book story. We got a pretty positive response but no one was really biting. While we were doing that, Skybound had been in touch with me and were asking to pitch because they liked Murder Book but they didn’t want to do crime. Sina [Grace, Editorial Director] was trying to push me to step out of my comfort zone, do things outside of crime. They wanted really high concept stuff. That doesn’t appeal to me, but I was trying to think of things outside of my crime comfort zone. I was thinking about time travel, which is something I’ve always liked as an idea but rarely like in execution. I was trying to come up with a way to make it interesting to me which is why all the limitations are there, and it’s not a huge scope; you’re not travelling back in time 40 years or anything like that.

I mentioned the idea to Michael and he seemed to really like it, so I developed it some more. From that point it came together pretty quick. I’d come up with the idea in the summer of 2011, Michael started working on it in November, maybe even December. Then we got in touch with Jordie in January, pitched it in February and had it picked up in March. It all came together pretty quick.” 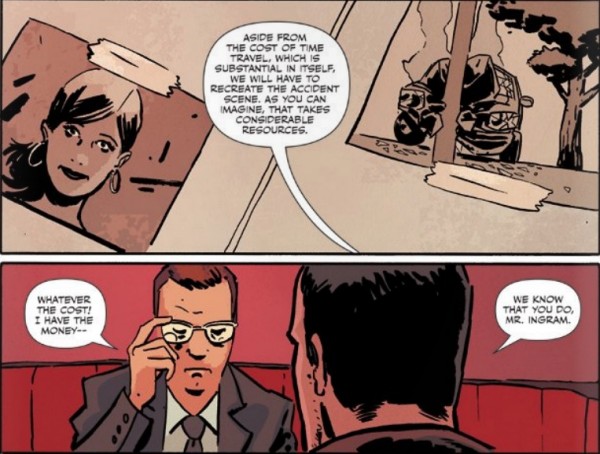 After being picked up by Image Comics so quickly, there was the potential for deadlines to rush Walsh and Brisson into producing something that didn’t quite meet their standards. Thankfully, that was not the case. “I’m happy with it,” Brisson begins, “but it’s funny: it’s so different than where it started out, and where I was going to go with it. If you see my original outline and then read the story, they’re two completely separate things. Owen and Seth had much smaller roles in the book but as I started writing them, they started taking over more and took it in a whole other direction. I am happy with how the whole thing came together for sure.”

Walsh agrees, with a minor caveat regarding his artwork. “I love the story, where it went, and I’m really happy with the slow build that we had, how it ends, and the sequence at the end of issue four. I think we did some things that hadn’t been done before in sci-fi comics so I’m happy with that. But in terms of actual artistic output, I try not to analyze it too closely because every time you look back at your work, you’re seeing the things you could have done better. I’m really happy with what it did for my career and the platform that it’s given me to get more work and build up from it.” 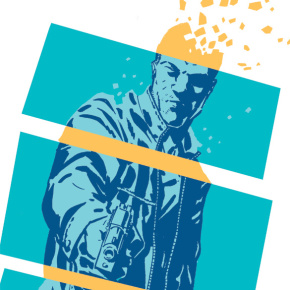 Comeback has a very specific look and feel, which contributed to some really memorable moments. Walsh describes what stood out for him (which may include spoilers, if you’re not up to date on your Comeback reading). “I think the very first time travel scene where the guy explodes was where me and Ed really started to click together and do things that were in each other’s heads. We started to develop more of a symbiotic relationship. I also really liked the sequence at the end of issue #4, where time was deconstructing and the panels were collapsing and fading out into nothing.”

“Spoiler.” Brisson deadpans (eliciting a chuckle of agreement from Walsh) before continuing. “Exactly what Michael said, those two scenes in particular were ones where I’d written them and they came out almost identical to what was in my head. The exploding scene for sure and that last page in #4, just for the way it’s happening and I love Owen’s attitude there. I think the line was ‘I sure as shit did.’ For some reason, that’s such a great last page to an issue that I was super happy with.” Walsh quips, “We shouldn’t have even done an issue #5 Ed. Just end it there.” That gets the both of them laughing before Brisson acknowledges, “Oh people would be pissed.”

Their comfort with each other is obvious, especially when asked to describe what their working relationship was like during the run on Comeback. “It was a pretty typical relationship…” Walsh begins, before considering it a moment. “Is it typical? I’m pretty young and naive, so I haven’t really worked with a lot of people. We got pretty close during the course of Comeback. Ed would send me scripts, I would lay them out and send them back, and we would go back and forth over whether things needed to change or if they could stay the same.” Brisson concurs. “It was a pretty easy process. I don’t think we got into a single argument during the entire thing.”

Drama is always a possibility when collaborating with someone new, which Brisson admits to hearing murmurs of. “I was talking to some creators at Emerald City Comic Con and hearing horror stories with them and artists. I don’t know what it is. I started off illustrating my own comics for the longest time, so I have a greater understanding about what goes into the art side of things than perhaps someone whose never picked up a pencil. So maybe that helped? I guess there was the potential for [drama] towards the end. I got behind a bit on the script, so there were times when I had to give Michael chunks of scripts rather than the full thing. Which I hated doing but it still went fine.”

There’s no hard feelings between these two and lucky for them, there doesn’t seem to be any from fans either. Comeback has been overwhelmingly well received by fans and reviewers alike, something Brisson didn’t expect. “So far it’s been overly positive. I’ve been really surprised, happy, and thankful for that. I can only think of one sort of overly negative review that we got, but it was just kind of funny.” Walsh adds ominously, “We’ll see when the last issue comes out! It could all change.” That gets a laugh, but fan reaction to issue #5 does seem to be a legitimate concern for the both of them. “I just hope that they feel that they got a decent, complete story.” Brisson confesses, “I hope that they enjoyed it and I hope they’re not pissed off or anything like that. I don’t want it to feel like a cheat. Which, with time travel, it’s so difficult to do. I just hope it feels good and complete.”

That’s what Walsh is gunning for. “I hope that we leave everybody satisfied. It seems like every issue that comes out, most of the reviewers say ‘Oh I can’t wait for next issue because that’s really going to determine if it’s a good series.’ And that’s been said for every issue.” Brisson continues the thought, “[reviewers say they] still don’t know everything that’s going on, next issue will explain it all.’ And I’m like ‘Oh god!’” He laughs at his own panic before elaborating. “I feel like a lot of things are answered by issue #4, a lot of the up in the air questions have been dealt with. The way that I write, I tend to shy away from a lot of exposition and try to meet the reader halfway without making everything immediately apparent. There are some exposition style scenes that drop the knowledge on you that you need to have to fully understand what’s going on but sometimes you have to dig for it.”

“Obviously, I have a biased opinion because I’m so close to the subject matter” Walsh states, “but I feel like a lot of stuff has been explained by the end of issue #4, and most of the questions that people have going into the last issue is, what the hell is going to happen? Because of the way the 4th issue ends, the 5th issue could really go anywhere. I think most of the questions pertain to where the characters are going to be, what time is it going to be, what effect did their actions in the past and the present have. So not really pertaining to the past issues of the story, they’re just wondering where it’s going to go moving forward.”

Comeback is a complete story unto itself, but Brisson confesses that they have discussed a second Comeback series, unrelated to Reconnect. “I think that certain things would have to happen before we could do it but sales were good enough that we could probably do that if we wanted to. Unfortunately Michael is well on his way to fame and riches, so he may be out of the creator owned game.” They both chuckle before Brisson admits, “It’s definitely something I’d like to do.” Walsh confirms, “We’ll do it Ed!” and Brisson jumps on the offer. “That’s a verbal contract!”

With the last issue of Comeback out on March 20th, Brisson and Walsh are looking forward to their next projects. Keep an eye out for Image Central’s official press release of Sheltered, Brisson’s new series drawn by Johnny Christmas, out July this year. Or ask Brisson nicely enough to read the solicitation aloud and you may get a glimpse of his fallback career: movie  title voiceover guy. Not to be confused with Deep Throat, the X-Files character Walsh may be illustrating during his run on the new IDW X-Files series written by Joe Harris, also out this July. If that’s not enough for fans of Walsh’s art, he’ll be illustrating an issue of the upcoming Image Central book Zero, written by Ales Kott, on top of assorted covers for other publishers.

Do yourself a favour and pick up Comeback #1-5 this week if you haven’t already. It’s the perfect end to a fascinating time travel buddy cop drama. How often do you get to say that?