When someone refers to you as “ugly,” hurt feelings, fisticuffs, and a hospital visit usually follow, but not in Frank Quitely’s case. His not-so-pretty art style is adored by his legion of fans and is reviled by others due to his sometimes off-putting and realistic faces, images that can be alternately compared to the uncanny valley or Tara Reid’s boob job. He has an undeniable technique, and where some people see his art as lacking, he makes up for it in illustrious illustrations.

Finding someone you can jive with creatively is a journey that can take some a lifetime and many won’t get the chance. But every so often, serendipity smiles down onto us and give us dorks another reason to live, hope for the future. Quitely has been blessed with an unforgettable partnership not once, but twice! His first partner was eccentric Grant Morrison on the hugely successful All-Star Superman, recently adapted into a full-length animated film. Now they are collaborating once again for Morrison’s Multiversity series, with Quitely offering his skills to the highly anticipated Pax Americana book.

Mark Millar is the Lil’ Wayne of the comic book world, pumping out jam after jam faster then most can read them. With Millar’s overzealous nature of squeezing out ultra-violent sub-cultured superhero books, it pains us to say that it’s started to wear a little thin. Jupiter’s Legacy looks like a breath of fresh air in the atmosphere of Millar, with a new and very original view on how we think of superheroes. With the popularity of Quitely and Millar’s first team up on The Authority, this book is shaping up to be a colossal success.

We had a chance to sit down with Frank Quitely at the 2012 Fan Expo in Toronto to talk about Canada, his collaborators, and his dislike of cons, all while swooning me with his Scottish tongue. 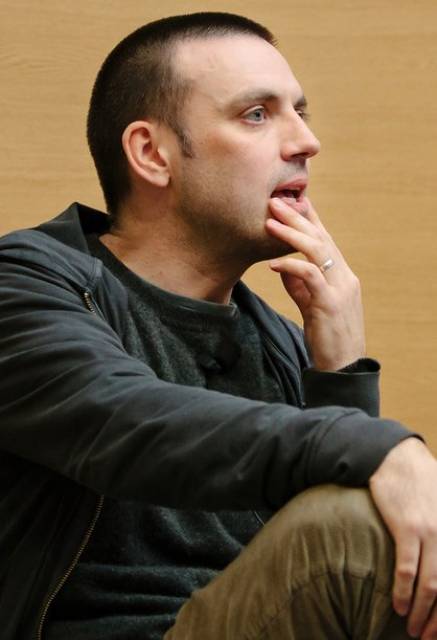 Dork Shelf: You’re not in Canada that often, eh?

Frank Quitely: This is my third time in about ten years.

DS: Is Toronto always your destination?

FQ: Yeah, for a couple reasons. The guy who runs this show (Fan Expo) phoned me up. I hadn’t done a convention, certainly not in North America in about ten years, and he phoned me up and asked, “Listen, what can I do to make you come over?” And this was followed by a conversation about what I don’t like about conventions and then I went through a list, and he agreed we didn’t have to do any of that stuff. He was really cool about it. He is not a comic fan, he is strictly a businessman and that is a really good thing. He just wants people over who are popular, and people ask for me and he just wanted me to be happy.

Another reason (well two) that I love Canada is — and I’m not making this up– Canadians are super courteous and super friendly. I’ve been to a lot of different countries and people are courteous and friendly, but the rate in Canada is much higher then pretty much anywhere else, apart from Ireland. The south of Ireland they are all super friendly as well. And my wife’s family is here, they come over to Scotland often, but it is really nice to see them as well.

DS: What are some of the things you don’t enjoy doing at conventions?

FQ: The sketch off that just happened went really well, but I actually find that quite nerve-wracking. I don’t like drawing with people watching me. For the first five minutes of the first sketch I kept erasing everything I was doing. This being my third Toronto convention, I have started to enjoy it a little more each time. For the first couple, I would try and not make eye contact and get in and out as quick as possible. But at one of the conventions, my wife actually came with me. Keep in mind she has no interest in conventions, and certainly hasn’t read any of my comics. There were large lines of people all telling me that I was there favorite artist, or that All-Star Superman was amazing, and my wife turns to me and says, “So, what exactly don’t you like about all this? People are being really genuine and really want to meet you!” And I said, “yeah, I suppose.” It has actually taken me a while to get into the swing of it, but I’m starting to enjoy it now.

DS: How do you feel about All-Star Superman being adapted into a movie?

FQ: I thought it was really good. I watched it, I loved it and I was really flattered. They had used so much of what I had put into the comics as reference visually for the way they had put things together. They could have taken Grant’s story and done something completely different with the visuals, so again, I was really flattered. I totally understand why they had to chop out some bits to make it the length it was. But, the death of Pa Kent in particular I thought would have been lovely to keep in. I would have liked it if they had of done twelve, 30-minute Saturday morning cartoons. But as a feature length movie I thought they did a really good job.

DS: Sticking with the topic of All-Star Superman, what is it like working with Grant Morrison?

FQ: It’s a pleasure and a privilege to work with that guy, and I mean that quite sincerely. Everything I have worked on, with Grant, I have really enjoyed and it has all been worthwhile. When I was getting the script for All-Star Superman I thought it was just perfect. 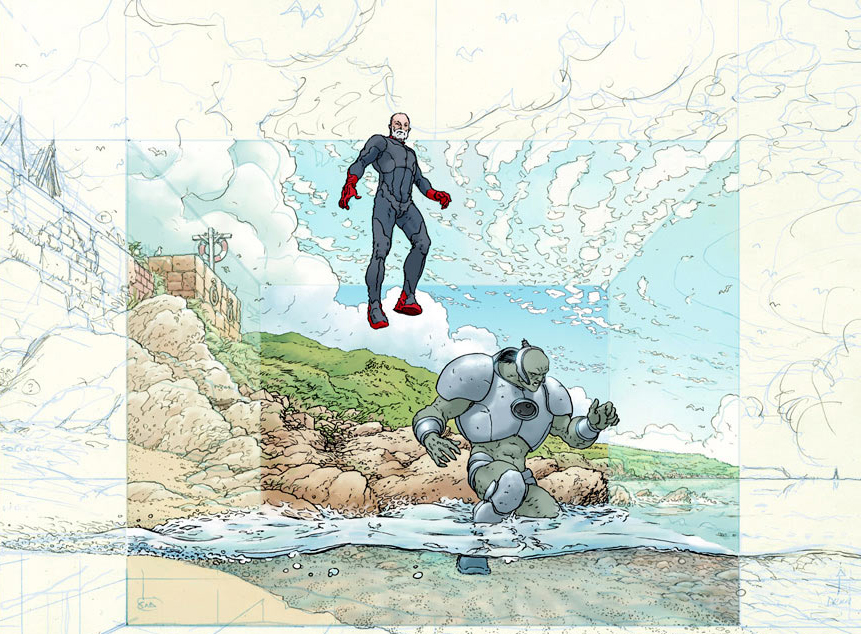 DS: What can you tell us about Jupiter’s Legacy?

FQ: You’ve got your original altruistic superheroes of the 1930s, then you have one or two generations after that and they are like the Paris Hilton types who are in a position of privilege but it’s about endorsement deals and publicity for themselves. I am not knocking Paris Hilton, I don’t know her, but this is all Mark has told me. They basically have a different approach to their appearance, and that is the basic premise. To be honest, plot wise, I have no idea. Mark gave me the first 10 pages so I could draw something for Super Crooks issue 4. It is a change of pace, and I enjoyed working with him on The Authority, so I am definitely looking forward to it.

Jupiter’s Legacy #1 is out now, available at your local comic book store.