Ryan Henson Creighton knows the responsibility of being a parent all too well. The Toronto-based game developer has two daughters, one of whom is already a world-renowned game designer, and he’s also been raising a third child — Spellirium, an adventure game using word puzzles as a battle system — since it was a first a twinkle in his eye in 2006.

In November 2006 PopCap Games released Bookworm Adventures, a video game that allows you to battle monsters by creating words from a grid system. Penny Arcade’s Jerry Holkins described the game as “linguaphile crack” and a “Scrabble RPG,” a concept that stuck in the mind of Creighton.

“The way he described this game, it sounded like the greatest thing ever.” Creighton recalled. “The game he pumped me up for was not the game I played. But that game was still in my head. Spellirium was that game.”

Creighton was in a transition. He was moving on from a job in broadcasting to fulfill his dream of creating video games for a living. He founded Untold Entertainment in 2007 and started creating games in early 2008. After few months of developing games, he began to shape Spellirium. But he needed funding.

Creighton turned to the Ontario Media Development Corporation (OMDC), a government organization of the Ministry of Culture to help grow and promote media companies within the province. Many funding options were available, and after spending almost two years trying to understand the process, Untold applied successfully for the Interactive Digital Media (IDM) fund in 2009.

Untold did not learn about its successful application until spring 2010. One of the conditions was to start within six weeks or they would not get the funding.

“I called all of the people [I had lined up previously] and they all said ‘We are busy. We have jobs, dummy!’” he said. “So I made a bunch of hires, people that I didn’t know myself. The odds were not in my favour.”

Spellirium is a child of its influences; the aforementioned Bookworm Adventures, and LucasArts’ point-and-click graphic adventure game LOOM. Spellirium’s setting was based on the mistaken notion that LOOM was actually set in the distant future, one that simply appeared to be medieval in setting due to some unknown disaster. The game refers to the passing of the ‘third shadow’ which Creighton assumed meant World War III, but LOOM’s creator debunked that idea when the two met in person at an industry event.

That imagined setting was perfect for Spellirium. It allowed players to use modern words without appearing too anachronistic and gave the game’s world an apocalyptic setting that Creighton deemed “trashpunk.”

This post-apocalyptic society is at a standstill because literacy has been outlawed. All words, letters, pictograms and any written transmission of ideas is punishable by death. The character you portray in the game is of the few people in the world capable of understanding and using words as weapons.

In four short months the game had gone from an idea to character art, backgrounds and prototypes being churned out by a new lead programmer. 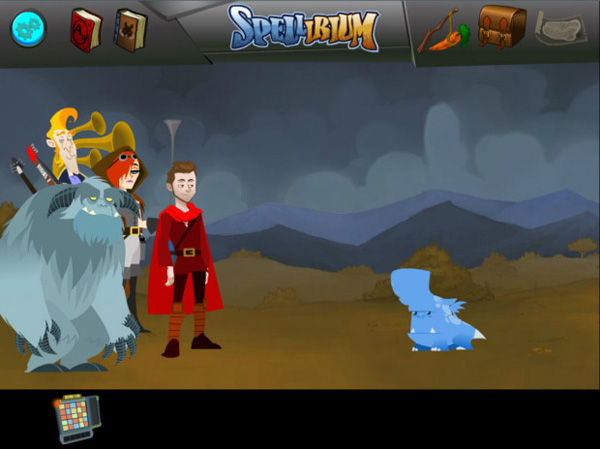 Although progress was being made on Spellirium, this was a turbulent time for the game and for Untold Entertainment as a company. In the summer of 2010, Canada was feeling the effects of the recession and small businesses were struggling. The market was changing rapidly which was not helped by Steve Jobs’ open letter admonishing Flash. Untold and many other companies developing with Flash were suddenly kicked out of the popular iOS sandbox. It was a penny-drop moment for the industry.

During those four months, Creighton had been introduced to a new project management system, Agile/Scrum, but he didn’t anticipate the learning curve and difficulty in bringing it to a team he had not worked with before.

After the development blitz in July 2010 and IDM fund was spent, most of the team was out the door and the game was not completed. The OMDC expected Spellirium to be finished or its financial contribution would be rescinded. Creighton negotiated with the OMDC, and the agency offer more time.

The plan now was to take as much of a margin from service projects to fund further Spellirium development while courting potential publishers.

The response was not positive, the prospects seemed bleak and Creighton describes being “talked down from the ledge” following the event.

After a few months of brooding in 2010, including what Creighton described as a “dark Christmas,” he found inspiration in a book by Rainforest Cafe creator Steven Schussler about his journey and challenges to start his restaurant chain.

“The whole book was amazing and inspiring. I’m thinking, ‘Man, I am going to make it someday. It’s just not happening, I don’t know why. Boo hoo. Poor me. You just need to get yourself noticed, Creighton!’”

In March 2011, Creighton traveled to the Game Developers Conference that contained a game to earn time on stage to ‘rant.’ He socially engineered his way to victory in a bombastic fashion, chronicled the story on his blog and garnered a huge following almost overnight.

Months later, at the annual Toronto Independent Game Jam (TOJam) — a Toronto-based event where developers create a game over a weekend — Creighton brought his five-year-old daughter Cassie to help design a game. The result was the adorable Sissy’s Magical Ponycorn Adventure, which went viral.

But neither big break brought in enough funding to move Spellirium ahead. The company ended up losing $7,000 in travel costs and inventory overstock from selling its own merchandise. Untold was also taking deals to raise money and work on the game in fits and starts.

“We’re rushing things and we’re just trying to scrounge together little bits of money to keep working on Spellirium,” said Creighton. “It’s still not going all that well. There are still knocks at the door. ‘When are you going to be done Spellirium? Can we come take a look at it?’ And things are stagnant… my primary responsibility is to make sure my family stays fed and that I don’t lose my house.”

In mid 2011 the OMDC negotiated a hard deadline — January 20, 2012 —  to deliver on six key elements that were a part of its original proposal.

On deadline day he had accomplished what he had set out to. The OMDC, however, was under the impression that the game would be completed with a start, some kind of center part and a conclusion — a distinction not understood by Creighton. The agency offered an additional year to complete the game.

He entered the final push on the “finished” product in the winter of 2012 for another three months.

Creighton emerged from the crunch in 2013, with much more facial hair and a few extra pounds. The OMDC reviewed the game and it met the requirements. He had a game and no more oversight. Now it was time to find some players.

Creighton has gone on the record before to share his thoughts on crowdfunding. This time he has something that he can show, but he needs support to get it past the last few hurdles. A third act and the audio for the game is all that remains.

He admires the crowdfunding success stories of Double Fine Productions and Introversion. Creighton has chosen the independent route since Kickstarter does not allow Canadian bank accounts. The main crux of his decision to go it alone is that he isn’t starting anything. He’s finishing it.

Creighton’s “Kickender” campaign has already started. Backers immediately get access to the alpha version of the game and a backers-only forum to provide feedback on the product. Potential backers can also sponsor a word in the game, have an opportunity to voice a character in the game or obtain a license for a school or classroom.

Spellirium is not a sandbox game, it is not a first-person shooter and there are not a lot of games like it. Creighton is not under any delusions that this is the game that the mass market has been waiting for, but he believes in his work. This is the life of a game that has stepped out in the real world to be show everyone what it is all about.

In the days since the campaign launched, the game has been mentioned on social media by Penny Arcade’s Jerry Holkins and Tim Schafer, founder of Double Fine. Other developers in the games industry have taken notice, such as Kim Swift, one of the lead designers for Valve’s Portal.

It has been a long journey for Creighton and Spellirium, but the vision is still there.

While Creighton admits that he has adapted, he stresses that he has never compromised. He hopes his passion will translate to players, although admittedly he is unsure just who those players are.

“This is what [the launch] will bear out for me. I don’t know who is interested in this game, but I’m going to find out.”