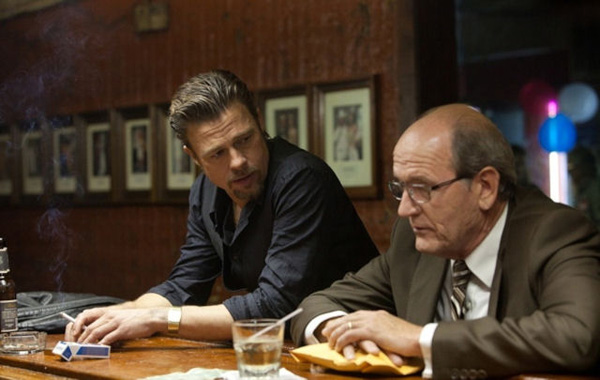 Andrew Dominik’s follow up to the quietly contemplative and thematically subtle The Assassination of Jesse James by the Coward Robert Ford is a nasty, brutish piece of Tarantino styled nasty entertainment trapped in a somewhat overbearing thesis statement about the dire nature of the American economy. Killing Them Softly is a stunning looking and sounding picture with some great performances and directorial panache to spare, but it becomes a bit of slog once the film’s bursts of ultraviolence run aground of the constant, unsubtle economic badgering. It wants to have its grand looking cake and devour it with pitchforks and chainsaws, but that doesn’t mean it isn’t entertaining to watch during the best of moments.

Set against the ever present backdrop of the 2008 US presidential election and the accompanying economic mortgage crisis, a pair of ne’er do wells and low level crooks (Scoot McNairy and Ben Mendelsohn) are tasked with knocking over an underground poker game with mob ties. Since the same game had been robbed years prior by its own runner (Ray Liotta) the repercussions and suspicions would be minimal. A local fixer (Richard Jenkins) calls the duos bluff and calls in a smart, ruthless hitman (Brad Pitt) to suss out the truth.

To get the negative out of the way early in much the same way that Dominik acclimates the audience to the tone of the film, the economic text of the film definitely overpowers and almost incorrectly underlines the sleazy underbelly of the film. It can’t even be called subtext since everything comes laid out on the table right from the film’s jarring (but well edited) Barak Obama narrated opening credits. When a man backs away from a poker table holding a room full of people at gunpoint, one can hear George Bush ask almost rehtorically “How did we get to this point?” The talk of America as a business, hitmen having a hard time finding work, and the mob succumbing to buraucracy are fine in small doses, but Dominik runs even the pulpiest and most viscerally thrilling scenes almost off the rails with his posturing. It’s not that his viewpoints are ill informed, but they can be cloying, heavy handed, and unnecessary most of the time, even when taking into consideration that most of his characters are vaguely right wing and would probably be the types to constantly have the droning TV news cycle on in the background of every sequence.

If Dominik swings and hits a foul tip when it comes to social commentary, though, he does strike pretty hard when it comes to making a film about posturing tough guys. The unease one feels in the presence of these characters feels spot on thanks to careful calculation. None of them are particularly likable save for the almost soulful performance given by Liotta as a man forced to pay for his sins way after he committed them. Pitt tones down his slicked back heavy to a menacing low-key performance of a man who seems to have more clarity than morality. Jenikins is fine as always as the skittish bagman who never leaves his car, and James Gandolfini gets to be as nasty as he wants to be as a hired thug turned alcoholic trainwreck brought in to assist on a difficult element of the hit. As the not-so-dynamic duo at the heart of the heist, McNairy gets a pretty standard role of a man in over his head down pat, while Mendelsohn attacks his role as a greasy heroin addict with aplomb.

Through his use of garbage filled lots (clearly in New Orleans and not in the original Boston setting of author George Higgin’s source material, Coogan’s Trade) and almost rythmic usage of sound effects and editing to create almost a symphony of ultraviolence, Dominik says far more as a stylist than as a commentator. That’s the biggest dischord within Killing Them Softly. It doesn’t do anything softly, when it could have used maybe just a little less.