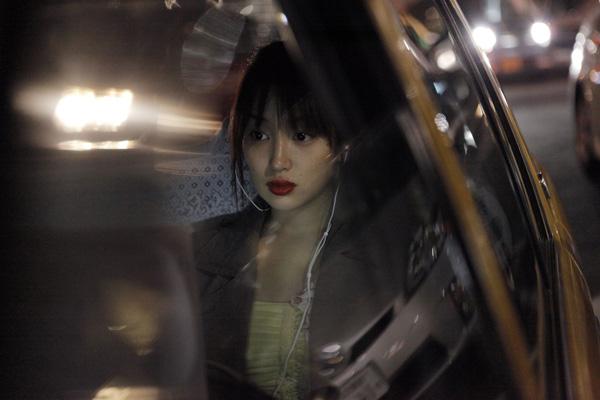 The latest film from Iranian master filmmaker Abbas Kiarostami (Certified Copy, Close-Up) might be the most poignant look at exhausted people striving for human connection ever conceived. Like Someone in Love is simple in execution, but volumes could be written about the emotional weight bubbling just below the surface of these characters that simply yearn for acceptance. It’s not a love story. These are characters that no longer have time for love. They simply want someone there for them, and in many respects Kiarostami shows how that’s sometimes a harder thing to ask of your fellow humans.

Akiko (Rin Takanashi) is a financially and emotionally struggling student in Tokyo that’s resorted to becoming a high class call girl to make ends meet. She’s constantly turning jobs down due to her school work and a particularly jealous boyfriend, but on the night of one of her biggest exams and with her grandmother unexpectedly in town, she’s forced to go an hour outside the city to cater to a high profile client. She makes her way to the home of Takashi (Tadashi Okuno), a former professor and current translation expert that can’t even find peace in semi-retirement with his phone ringing almost all hours of the day and night. He merely wants companionship. She’s exhausted and simply wants to sleep with the guy and get on with her life. Through a series of events they will spend the following day together, as well, with Takashi gradually becoming more protective of Akiko the more he learns about her life.

Named after a famous jazz standard, the film moves at the speed of life in the same slinky smooth fashion as the titular tune. Kiarostami has always excelled at making films that move at the speed of life, but the long and meaningful sequences of people simply talking and interacting take the appearance of snapshots of memories that won’t soon be forgotten. Every line of dialogue is the characters and every bit of characterization is the actual plot of the film. There’s nothing more than what needs to be said, but what’s being said is a lot to take in and it’s constantly engaging and thoughtful.

The structure of the film is simple, but nothing about the craft is. The sheer enormity and value of the conversations here would make Georg Voigt and Quentin Tarantino equally bristle with envy. There’s no symbolism here. No pretension or ego. These are people. Flesh and blood human beings with all their faults and flaws on full display pouring out every last ounce of emotion they can because none of them ever know when they will get another chance. These are raw feelings undistilled.

There isn’t even a textbook “inciting incident” that comes into play until 88 minutes into this 107 minute film. It’s the moment that brings all of the film’s characters together during a particularly dark period of the day, but one that Kiarostami won’t offer any explanations or even real catharsis for because that was never the point of the exercise. It only even happens because we know these characters by this point and we feel for them because as far as we can tell they have been completely honest with us. It’s not done out of the desire to give the film a tacked on conflict.

It’s all told through the use of incredibly lengthy scenes shot with an eye that’s balanced the mundane with the beautiful. Few other filmmakers could have made a seven minute sequence of someone listening to their voicemail in a cab so stunning and heartbreaking to watch and listen to. It plays in quite nicely with the film’s underpinning theme of unplugging and simply getting back in touch with the world around you, and every scene allows the viewer to question just what constitutes a meaningful conversation. A late film arrival of a nosy neighbour really underlines this point, and although the character is somewhat annoying, troublesome, and has a small arc, there’s a pay off that few filmmakers would bother to include.

Akiko and Takashi, on the other hand, might never get what they want until they wise up about the position of their own lives. Takashi, the oldest and presumably wisest of the characters, has begun to wise up to this, but Akiko has all but reached a level of despair so potentially damaging that there’s nothing she can do but remain detached and watch life play out around her. Both are ruled by the whims of others to almost selfish degrees and both need a break, but it’s never clear if either character will ever get one. It should also go without much saying that Kiarostami gets the absolute best out of his performers here, and the relaxed feel of it all might have something to do with it.

Like Someone in Love doesn’t take a single wasted breath, but a cynical and wrongheaded argument could be made about the film not having any dramatic thrust until the very end. These people have no time for drama beyond what is created for them by external forces. We see the drama created for Akiko, but not so much for Takashi until she comes into her life. What’s most surprising is just how useful Takashi feels being brought into the centre of it all. It’s a personal drama and it looks like he hasn’t felt this good or this noticed in quite some time. It’s easy to share the sentiment given how excellent the film around him is.