If one were to plot out the ranking of Woody Allen’s films from best to worst (as many people have in the past several weeks judging by the number of lists that keep cropping up), the frothy, but hardly vital Magic in the Moonlight would show up somewhere just barely on the positive side of the dead centre. There’s nothing particularly wrong with it as a whole, but it’s not even really striving to be the best possible bit of light entertainment that it could be.

We’re once again in the hands of the nostalgic, wistful Woody Allen that produced Midnight in Paris and Purple Rose of Cairo, but also the same guy who simply makes films now because the locations are pretty to look at and/or someone paid him good money to shoot there (neither of which can be held against him). It’s 1928 along the coast of France and an uppity masquerading magician and atheistic debunker of all things supernatural named Stanley (Colin Firth) has been summoned by a colleague to determine the psychic abilities of Sophie Baker (Emma Stone), a spirit medium that reportedly seems to be the real deal. Stanley observes curiously as Sophie’s mother (Marcia Gay Harden) keeps a close eye on the financial side of dealing with a wealthy family, particularly a smitten ukulele toting doofus (Hamish Linklater) who can’t take his eyes and affections away from Sophie for more than a few seconds at a time. But the more Stanley observes, the more he tends to believe in Sophie’s abilities, making her more attractive in his newly expanded mind. 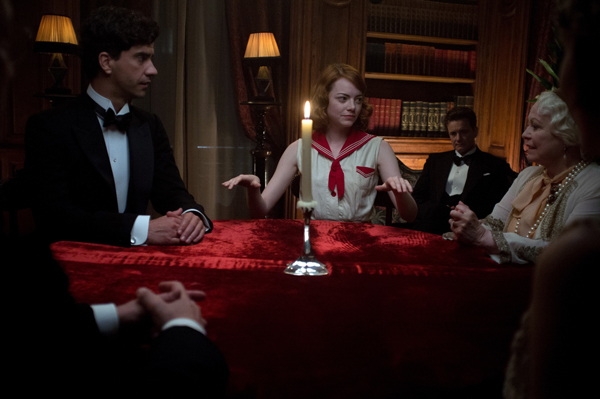 Perhaps the worst things that can be said about Allen’s work here is that it’s intensely predictable. From the vaguely and period purposefully racist opening that has Firth playing in yellowface to the big reveal at the end, there isn’t any punchline or emotional beat that can’t be seen coming from a long distance off. If you were to be told the premise of Magic in the Moonlight in a single sentence before watching even a frame of film, you would already know everything that happens. Even Allen’s direction never strays from the same kind of vaguely fuzzy bordered focus that he has been coasting on for decades now (albeit a bit more gorgeously shot this time out). The only thing Woody can really do here is to charm the audience, and since the material here is so standard and stock, it doesn’t so much rest on his shoulders, but those of his capable cast.

All of the entertainment mileage that this project gets comes from the effortless grace that Firth and Stone bring to their roles. Firth asserts himself well to the role of a gradually enlightened boorish blowhard, bringing with him an understanding of atheism and trickery that feels authoritative rather than someone simply reading Allen’s sometimes dreadfully expositional dialogue. He plays well off of Stone, who gives one of her best performances as someone the audience isn’t ever really sure of. Whatever mystery and magic the film gets largely comes from watching her and wondering if she’s ever being genuine with Stanley and everyone around her. We want to give Sophie the benefit of the doubt, but even if she did turn out to be a fraud, she’s sympathetic enough to almost be forgiven.

The scene stealer here is Linklater, though. He seems born to have read the part of an erudite asshole in an Allen film. He has a way with phrases and body language that make him feel very much the part of someone who Fitzgerald would have envisioned at one of Gatsby’s parties. Also worth noting is a wonderful Eileen Atkins as Stanley’s acerbic, but soulful Aunt Vanessa.

But that’s really all that can be said about this one as a whole. This isn’t Allen going deep in the slightest or even attempting something ambitious that’s going to miss the mark. This is Allen shrugging and saying “I kinda like this kind of movie.” It wouldn’t be summer without a new Woody Allen movie, but this might be the first film of his in a long time to have been expressly constructed with this very season in mind. It feels custom made for outdoor waterfront screenings that don’t charge admission and people sip wine for a couple of hours. I guess the world needs films like that, and in those parameters (and Allen’s track record with fantasies) this could have turned out far worse.