Me and Earl and the Dying Girl gets its wide theatrical release today, but to many it’s already a hit. At Sundance, it was met with a standing ovation, was acquired by Fox Searchlight Pictures hours later, and won the U.S. Grand Jury Prize for a Dramatic feature. Since then director Alfonso Gomez-Rejon and the cast have been touring with the film and heavily promoting its release (check out our  interviews with Alfonso and the cast). There’s no doubt that it’s a crowd pleaser. It’s funny, charming, sad, well made, and appeals multiple demographics, particularly film nerds. It’s an enjoyable little film, but it’s far from perfect.

The story is simple: Greg (Thomas Mann) and his friend Earl (RJ Cyler), are high school cinephiles who spend most of their free time making parodies of classic films. Life gets a little more serious when they become friends with Rachel (Olivia Cooke), a classmate who has been diagnosed with cancer. The young cast is supported by some familiar faces: Connie Britton and Nick Offerman as Greg’s parents, Molly Shannon as Rachel’s mother, and Jon Berenthal as their hip history teacher. The film’s success rests on the young leads being able to pull off both the comedy and dramatic scenes, which they certainly do. The only person who was miscast was Molly Shannon who can only really do one of those things. As the mother in denial of her dying daughter, she always has a glass of wine in her hand and flirts with the high school boys for laughs, yet I found this to be the most tragic story element of the entire film.

The film’s funnest aspect is the film parodies that Greg and Earl make. Because of Earl’s eccentric bohemian father, Greg is into the kinds of movies most teenagers have never heard of: Werner Herzog films, French New Wave cinema, and other art house classics. Their spoofs are silly and somewhat juvenile (A Sockwork Orange, My Dinner With Andre The Giant), yet all are achieved with much more panache and accuracy than a normal high schooler could produce with their iPhone. While the film has elements of Wes Anderson, this crafty, handmade cinematic love letter is much more in the vein of Michel Gondry, kind of like Be Kind Rewind for Criterion nerds. Most of the parodies are brushed over in a montage that ends all too quickly, hopefully we can see more of what was shot once the film comes out on Blu-ray. 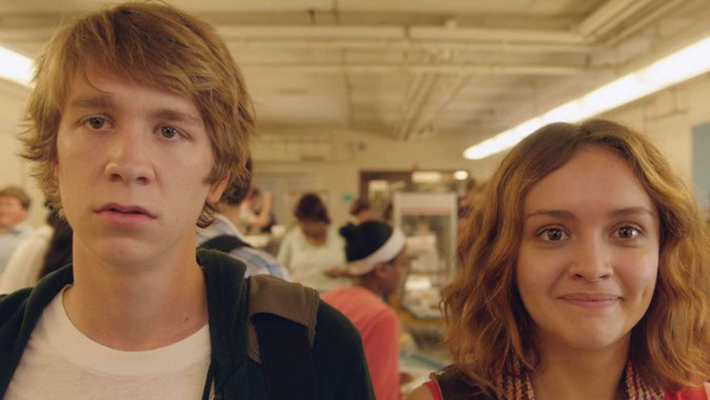 Greg’s apparently self-taught ability to work with all kind of mixed media, from 8mm film to making intricate stop-motion sequences with his iPhone, leads me to another plot point that irked me. As a senior, there is a heavy emphasis on him getting into College the next year. The more time he spends with Rachel, the less likely it becomes that he’ll have the grades to make it. Obviously a lot of the pressure comes from the adults (Greg’s parents and teachers), but the more the film becomes about whether or not he will get into College, the more I questioned what the film was actually supposed to be about. What he would study in College is never even brought up. Presumably he should go into film, he already has more than enough to make a portfolio that any film program would be impressed by. It feels like a dated idea, that every kid MUST go to College, even though he already has more technical skills than most College grads. When put next to Rachel’s terminal illness, it’s really hard to care whether or not Greg gets into College, the film isn’t called Me and Earl and the College Applications.

It’s called Me and Earl and the Dying Girl, but another misleading thing about that is that we don’t get nearly enough Earl. This was RJ Cyler’s first real acting gig and he threatens to steal the movie in just a few scenes. His dry, deadpan delivery is hilarious but he’s mostly just there to help Greg with his films and put him in his place a couple times. Other than the fact that he’s from the bad part of town, we learn very little about his character and are left wanting more.

The film is full of misleads, some more intentional than others. There is a ‘hot girl’ who Greg keeps implying will crush him without realizing it, using the analogy of a moose stepping on a mouse, and yet she ends up being entirely inconsequential. This feels like a leftover plot element, the conclusion of which was ultimately cut from the final film. It is often manipulative, but that’s not always a bad thing. When it works, it works wonderfully. As I stated from the beginning, this is a good film that most audiences will embrace. While most of this review may read as negative, I really did like it, which is why I wish they’d done a few things just a little differently so I could say I loved it as much most people probably will.