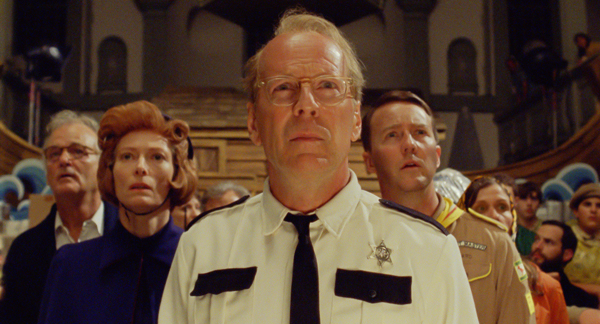 While Moonrise Kingdom doesn’t find writer/director Wes Anderson making a break with his characteristic auteur trappings, it’s the kind of film that presents itself as a career defining work. Handily one of the best films in the canon of a director who has seemingly prided himself on being a man that audiences either understand or they feel apathetic towards, this tale of young love born from familial discomfort takes elements of his previous successes and assembles them into a package most directors spend their entire careers building towards. Charming, well acted, funny, and sometimes psychologically unsettling (but purposefully so), the film approaches a level of warmth that can only come from a person leaving all of their cards out on the table face up while playing a game with the audience. It’s refreshingly transparent and effortless.

In 1965 on opposite ends of the tiny New England isle of New Penzance, a young Khaki Scout and chronic foster child Sam (Jared Gilman) and his pen-pal, a young teenage girl with anger management issues and lawyer parents named Suzy (Kara Hayward), decide to run away from their totalitarian and rigid lives and meet up to form a plan to find a way off the island. While their attraction and bond blossoms, the adults of the island are forced into a frantic search for the missing children.

Hopelessly insecure Scoutmaster Ward (Edward Norton) rallies his young charges to form a search party to assist local police officer Captain Sharp (Bruce Willis) in the search, with Suzy’s equally hardnosed and aloof parents (Frances McDormand and Bill Murray) never more than a few steps behind. As the search intensifies and the on-again-off-again game of cat and mouse between Sam and Sharp continues, the officer begins to suspect that maybe being placed in another foster home when this is all done would be the worst thing possible for the young man.

Anderson’s much discussed visual style reaches a full integration here. The colour palate and mischievous attention to detail he showed in The Life Aquatic and Fantastic Mr. Fox meets with the prim and proper aesthetic from The Royal Tenenbaums and Rushmore, while also including a health dose of both of those film’s more literary influences. In what might be one of the biggest breaks for the filmmaker, however, the film doesn’t focus on familial bonds between siblings as it does on building more heartfelt bonds of actual love an affection, particularly between Sam and both Suzy and Sharp. All of this naturally gets played out within the parameters of Anderson’s more auteurist trappings (love of all things French, an omniscient and helpful narrator, Bill Murray looking dour), but there’s something far more intimate and heartfelt this time out. Anderson has finally become so technically proficient in his filmmaking abilities that he’s become free to throw everything he emotionally at a story and the characters within it.

This focus on a deeper kind of love also gives the film the sense of unease mentioned earlier. At one point, Anderson veers dangerously close to entering The Blue Lagoon territory with a dance sequence that becomes something more. Whatever happens takes place off camera, becoming fodder and legend for boys around the campfire later in the film, but there are a few lines of dialog that ring true because of how awkward they are. The scene will become the ultimate litmus test for viewers to decide if they like the film or not. While some might not be able to put out of their mind that the film is being directed and written by a 43 year old man, many will probably rightfully see this as the point where the filmmaker taps into something deeper. This type of awkwardness rings truer than anything in the Anderson’s filmography. In the past, Anderson has stood behind music cues, day-glo production design, and character idiosyncrasies to distance himself from the material. Here it showcases exactly the kind of filmmaking that can only be done by people who have experienced something similar. It’s not to say that there aren’t elements of his past work that aren’t somewhat personal, but here as the film progresses it evolves into a deeper sort of confessional.

Like many Anderson films, he doesn’t shy away from the personal pain his characters are going through, but the younger ages of the leads makes everything seem amplified; just like when you’re young and you think every crisis takes on the feeling like it’s the end of the world. Here, however, it’s also applied to the adults through Ward’s bluster and ineffectuality and Sharp’s unspoken love affair with Suzy’s mother. The isolation of their being has led all of these people to become shadows of the people they want to be, and deep down all of the adults probably secretly want Sam and Suzy to succeed. They all give off the air that they are searching out of obligation and fear for their safety rather than out of a righteous duty to punish or shame the children.

Providing wonderful assistance in this department are some of the best performances Anderson has ever had. As the lead pairing, newcomers Gilman and Hayward have remarkable chemistry and commanding onscreen presence. Gilman plays Sam as just being slightly left of centre, which befits the character’s abandonment issues. He’s a bright kid who unlike many Anderson heroes doesn’t rely on his smarts because he’s afraid of abandonment. He’s already been abandoned several times over and he uses his inquisitive nature to desperately win people over in hopes that they’ll actually stick around. As for Hayward, she makes Suzy an adequate ball of rage that’s grown tired of being the odd sibling out in her large family. It’s a “middle child syndrome” of a different sort. As the only girl in her family aside from her bullhorn toting mother, her brothers are constantly seen bonding without her, leaving her to learn life through taking on hobbies and roles in plays that she only has passing interest in so she doesn’t fully give in to her anger. It’s a hard line to toe when trying to convey frustration and fragility, but Hayward nails it.

On the adult side, Norton puts in some of his best work in years with his hangdog performance as an authority figure who really just wants to break down and cry, but he still has to exude some form of power. (A good companion performance to his work here and comparison can be made to John C. Reilly’s performance as a lonely police officer in Paul Thomas Anderson’s Magnolia, minus that character’s romantic subplot). Murray and McDormand are old pros who get slightly less to do here, but they still add to the film’s dynamic quite well, since their characters already have the outward confidence that Sharp and Ward lack, but they also have considerably more repressed feelings about who they really are. Tilda Swinton also shows up as an emissary from Social Services that flies to the island to berate Sharp and Ward and to take Sam away to another foster family, effectively serving as the only real villain in the film; a role the actress bites into with great aplomb.

But if the film belongs to anyone, it’s Willis who has never been closer to being Oscar worthy than he is here. Putting his aging action star looks to perfect use as the lone sheriff in a no-horse town, the actor seems pushed by Anderson to go as deep within himself as possible. Willis obliges making Captain Sharp the most deeply sympathetic character of the actor’s career, especially in the second half of the film when Sharp has a chance to bond with Sam. Sharp finds a kindred spirit in Sam that Willis plays beautifully and subtly as they drink milk and beer over a skillet of somewhat burnt sausages. Nothing that Willis of Gilman says in the sequence has any huge importance, with most of it being snappy banter about the situation, but the actors craft performances that can bring tears to the eye simply through body language alone. They show the point where regret and loneliness can finally evolve into a feeling of hope.

Moonrise Kingdom has a real beauty to it unmatched by anything else so far this year. While it’s not all that surprising that the talented Mr. Anderson would make a great film, the emotional resonance of the story and its warmth and humour stick in the mind long after the film’s thoroughly satisfying conclusion. Much like cramming as many great memories as possible into the waning days of summer, looking back on this film brings a smile to the face and the feeling that you want to revisit it all over again as soon as it ends. Thankfully, the film comes out at the beginning of the summer, meaning you can carry the warmth and good will of it with you all season long.