Not Fade Away Review - That Shelf Skip to main content 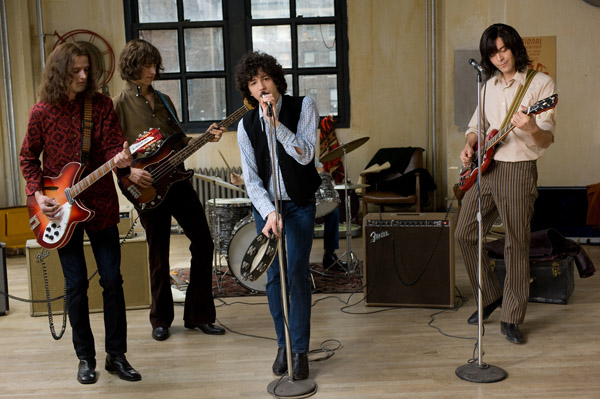 The 60s man…oh boy, those were troubled times. There was politics and music and stuff. And when the youth from that generation came of age among Vietnam fascism, flower power, and totally rad music, it was like America came of age at the same time. If you’ve ever spoken to a 60s veteran for five consecutive minutes or even watched any five minutes of Forrest Gump, chances are you’ve had that sentiment hammered into your head. However, just in time for Christmas we’re all going to hear it again from the unlikely source of Sopranos creator David Chase. After permanently changing television for the better, Chase decided it was time to get into the movie game and after five long years he’s finally released his 60s-flavored debut Not Fade Away. After decades of gangsters Chase got personal here, perhaps a little too personal. Though incredibly evocative of a specific time and place and bravely willing to ignore convention for a bittersweet tale as messy as life, the movie is a bit indulgent. It feels like a project primarily made to appeal to Chase and his friends. While there’s nothing wrong with an artist getting that autobiographical, the audience can feel left out on the in-jokes and references. If the movie didn’t have to face the expectations of being the first project shot out of Chase’s word processor in 5 years, it might be a sweet and melancholic debut.

The film takes place in the suburban New Jersey that Chase called home in the 60s. While wiseguys may have had their “businesses” running up the block, Chase doesn’t pay them any attention this time. Instead his focus is on the kids kicking around who got obsessed with the British Invasion, grew their hair long (their parents were not impressed!) and decided to form a band. So we meet John Magaro’s Douglas whose life changes when he hears the Stones, man. He’s an aspiring drummer who sits in for a cover band by a few classmates (Jack Huston and Will Brill) and ends up joining the group. Soon their rocking basements all over the tri-state area, smoking joints n’ giggling in bathrooms, and getting girls for their musical shinanegins (in particular Mararo finds that idealized first love in the doe-eyed Bella Heathcote). Soon he takes over as the singer/front man and insists the group start writing their own songs to try and make it in the music game. The usual infighting and hard luck lessons apply as Chase meanders his way through a coming of age tale and the band never makes it. This movie isn’t about triumphant success. It’s just about that troubled generation of kids and the music they loved.

That right there is biggest strength and weakness of Not Fade Away. From start to finish Chase admirably avoids forcing a conventional band arc onto his movie or needlessly tying his story into the iconic 60s events that we’ve seen so many times. There are moments when the band is shooting the shit about whatever or Magaro is bickering with his parents (including poppa James Galdolfini) that feel wonderfully, awkwardly real. Chase has demonstrated his eye and ear for acute social observation before and Not Fade Away proves he had that talent dating all the way back to his youth and clearly stockpiled memories that spill out into scenes here. Working with a cast of unknowns, Chase nurtures thoroughly believable performances and creates fully rounded characters. Along with the detailed production design that leaves no shag carpet unsoiled, the film does vividly transport the audience back to a specific time and place. Trouble is that by design not too much happens within that place. With no rise-to-power arc to follow, the characters just bum around without doing much and any thematic undercurrent that slips though the cracks ends up being some more of the “whoa…the 60s man” sentiments that grew tired long ago. Naturalism is a wonderful thing to achieve as a filmmaker if you have a compelling story to tell or something fresh to say. If it’s just naturalism for the sake of reliving a misspent youth, the only appeal is to the filmmaker and not the audience. While there are many moments throughout the flick that resonate, it just never comes together in a way that offers a satisfying experience to anyone other than the folks who share Chase’s memories.

So, to extend the musical metaphor that the filmmaker leans so heavily on, Not Fade Away feels like the troubled follow up album to the breakout triumph of The Sopranos. It’s clear the film means just as much and is probably even more personal than that TV masterpiece, but maybe Chase could have used some voices fighting against his genius to narrow down the focus. The film is filled with all of the hiccups, indulgences, and growing pains of the usual first feature, which is really only irritating because it comes from such a recognizable source with an amazing track record. Writing for the screen for the first time, Chase has crammed in enough spiraling narrative threads for an HBO series, which maybe Not Fade Away was at one point. Perhaps given more time to breath this would have felt like something more, but as a 2.5 hour feature, it just feels like a expensive scrapbook made with insight and care, but little purpose beyond reviving memories. It’s not a failure, but it’s far from a success. On the plus side, moment to moment Chase certainly proves to have the skill to direct a feature film, so hopefully he’ll get a chance to do another one soon and learns lessons from his growing pains like his characters didn’t. He’s clearly onto something, but whatever Not Fade Away might be, it doesn’t quite have the impact he intended. Ah well, better luck next time.

*As an added bonus, the one out-and-out shit sequence in the film is an embarrassingly awkward prologue rendition of Mick Jagger and Keith Richards casually deciding to form the Rolling Stones. I’d like to provide you with my memory of how it played and you can decide for yourself if you want to stomach the real thing.

“Oy Mick! Are u still listin’ to that blues music when you ain’t bein’ a chiminy sweep?”

“That’s right Keif, I’m even finkin’ about startin’ a band”

“We should do that together, mate. We’re cockney and misunderstood. It could be massive, mate.”

“Have you tried drugs yet me ol’ chum?”

“Oh Jolly Rodger! We are about to have our innocence corrupted, we are!”