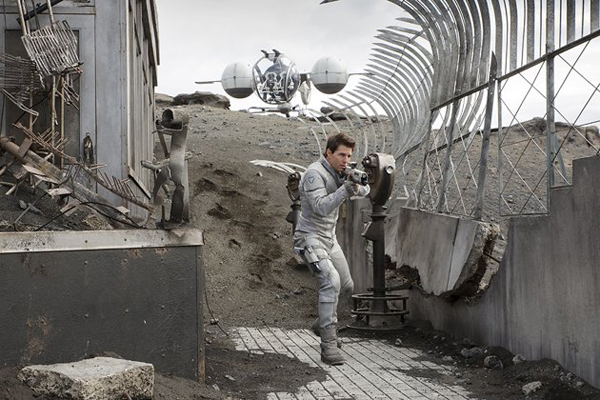 Joseph Kosinski has definitely become a filmmaker that I want to keep my eye on despite the fact that the two feature films that he has made to date have really only been passably good. The Tom Cruise starring sci-fi thriller Oblivion follows on the heels of his work on the long gestating Tron: Legacy. Both are incredibly well directed and feature a superb sense of visual accomplishment. In both cases the story is just okay, featuring some nagging problems on a plotting level if you stop to think about that, but Kosinski also didn’t actually write the script for either of them. Oblivion fares a bit better thanks to the material being based on an idea Kosinski had for a graphic novel, and there’s a more controlled feeling to the proceedings here. He’s great, the cast is great, and the action and visuals are great, but the story is only fine for the moment. It’s doubtful anyone would call something like this timeless, but promising is definitely apropos.

Decades after a war began in 2017 against alien forces that destroyed the Earth’s moon and forced all surviving humans into space, only two humans remain on the now desolated and destroyed third rock from the sun. Along with his partner in work and love Victoria (Andrea Riseborough), Jack Harper (Cruise) is a drone technician that keeps a fleet of alien fighting robots operational and protects the giant fusion turbines that transmit energy back to space. Only two weeks away from completing their mission, Jack begins to get antsy and sad to be leaving his former home behind for the cold, sterile recesses of space. Mysterious attacks begin happening on the infrastructure and things get even stranger for Jack when a NASA pod re-enters Earth’s atmosphere, carrying with it a mysterious woman (Olga Kurylenko) that he remembers in fractured memories from his past.

Oblivion is every bit a star vehicle for the usually magnetic Cruise, and that’s a positive this time out. It’s nice for him to play the sort of “does whatever he wants” badass he’s made his career off of after the misstep of Jack Reacher last year. There’s a certain amount of humanity and dignity that Cruise brings to this other Jack. The pain that he can’t describe about memories he can’t reconcile thanks to a memory wipe is worn on his face at all times. It’s one of his best performances and the role suits him quite well.  He gets fine assists from Riseborough and Kurylenko as his closest confidants and from Melissa Leo as Harper’s hard assed, somewhat uncaring off-planet boss. Kosinski also knows how to utilize the actor’s love of action by building some pretty great set pieces for him to play within, including a pretty great hand to hand fight sequence and a spacecraft dog fight in a canyon that’s aping both Top Gun and Return of the Jedi quite lovingly at the same time.

That loving aping of past science fiction and action successes, also ends up shooting the film in the foot somewhat in the second half, but instead of keeling over and giving up, it all hobbles along admirably. The predictability of the film never stops suggesting to the audience during the first half that everything Jack thinks and believes will be wrong. That’s fine because from the start since Oblivion is an unpretentious and well imagined take on the classic Omega Man story in a lot of respects, but as it goes on the film’s lack of creativity in terms of plotting makes it patently obvious what better known films, franchises, and video games are being used for inspiration. It’s never bad enough to stop watching the film or to take you out of it entirely, but while the twist that the second half builds itself around is good, it’s the little details within it that make one wish there was just a little more to it.

What holds it all together is Kosinski, who looks poised to become a very special kind of sci-fi and action filmmaker. He knows how to use the frame to get every inch of detail out of it, and shooting here in 65mm (which looks great and should be viewed on the biggest screen possible at the loudest possible volume setting) he creates a world that doesn’t succumb to the same problems the script does. Taking place in and around the ruins of New York City, he’s buried most traces of humanity under rolling hills and vaguely muddy deserts. The gadgetry on hand looks cool, which is kind of a must for these kinds of productions, and his true MVP is last year’s Oscar winning cinematographer Claudio Miranda (who won for Life of Pi and previously worked with Kosinski on his last film), a man so talented that he can even make a wet T-Shirt hitting the area around a pool look stunning in a close-up.

But what’s perhaps most heartening about Kosinski’s work here is that he proves isn’t the same kind of drab, fast cutting action filmmaker that audiences have been unfortunately become accustomed to the past decades. He can actually hold his shots and make them engaging. The movie flows instead of frantically cutting together random shots of people acting badass wily-nilly. It’s a nice approach and one that should be used more often. He knows he wants his film to look as good as possible. His visuals are so well thought out in advance that he refuses to damage them by cutting around them. Emerging filmmakers could learn a lot just from how he’s operating here.

The story to Oblivion might not be that memorable, but as a package it’s a pretty great experience. Certain plot points aren’t very well explained, and even though they mostly add up by the end it doesn’t make them a lot more interesting. Still, there’s so much here that’s worthy of praise that it can’t be written off entirely. Kosinski is just a few steps away from making his masterpiece, I think. This is a step further in that direction.

Note: Even though you see him in the trailer, you’ll notice I don’t mention the work of Morgan Freeman in the film. His character is impossible to really talk about without spoiling the whole film. He’s fine, and suffice to say if you know anything about his career as an actor, you probably already know why he was hired.