On the Rocks begins where most romantic movies end: with a fairy-tale wedding. Newlyweds Laura (Rashida Jones) and Dean (Marlon Wayans) sneak away from their own lavish wedding reception to spend time alone. To hell with the music, champagne, and hall full of guests, all this young couple wants to do is to be in each other’s company. How romantic. But On the Rocks is written and directed by Sofia Coppola, which means Laura and Dean better enjoy their honeymoon because life is about to get real messy.

The film jumps ahead to several years after the wedding. Laura and Dean’s relationship isn’t the dreamy love affair we saw early on. They’re parents to two young children, and Dean is devoting all his time and energy to his job. While Dean’s career is skyrocketing, and he’s always on the road, Laura is in a major funk. She’s a successful author/stay-at-home mom suffering through a bout of writer’s block.

When Dean comes home from his latest business trip, something feels off. After stumbling into the bedroom high on Xanax, he goes in for a kiss, and Laura thinks her husband confused her with someone else. And soon after, Laura discovers a woman’s travel bag inside Dean’s luggage. Not sure what to make of the situation, she calls in her father Felix (Bill Murray) – a true player for real – for his candid advice. According to Felix, men are hard-wired to cheat. To prove his point, he pulls Laura into a sly detective caper to uncover what Dean is up to.

On the Rocks isn’t the wacky feel-good comedy the film’s trailer makes it out to be. Sure, you have comedy legend Bill Murray at his Murriest, and a breezy score from French indie-pop band Phoenix, but On the Rocks is as sombre, pensive, and meticulous as anything else in Coppola’s filmography.

On the Rocks looks fantastic even though it lacks the intricate costuming and production design that marks Coppola’s filmography. Cinematographer Philippe Le Sourd conveys Laura’s sense of isolation by capturing the bustling streets of New York as a melancholic playground. Le Sourd photographs Manhattan as a cold and dreary metropolis, awash in murky greys and blues. Coppola contrasts this chilly vibe with the lively bars and restaurants that Laura and her dad frequent as they plot their caper.

Calling On the Rocks a comedy is a stretch, but it’s more playful than most navel-gazing dramas. Watching Felix and Laura cruise around town in a red Alfa Romeo and gorge on caviar during a stakeout slapped a big silly grin on my face.

While On the Rocks isn’t plot-heavy, it works like gangbusters because hanging out with Laura and Felix is a blast. Just be mindful that watching their father/daughter adventures in a pre-COVID New York feels bittersweet. Part of me was happy to live life vicariously through the film. But I’m a city guy, through and through, and seeing Laura and Felix bop around The City That Never Sleeps deepened my yearning to be out among people. 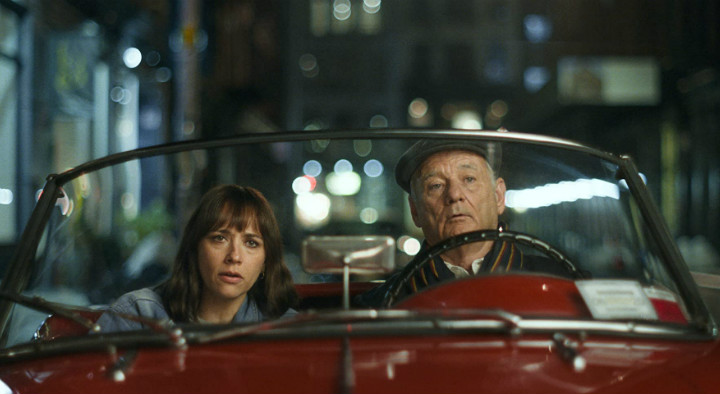 On the surface, this film is about a woman getting to the bottom of her husband’s possible infidelity. But Coppola is most interested in reconciling Laura and Felix’s opposing philosophies. Laura is a forward-thinking modern woman, while Felix thinks he’s the modern-day Rudolph Valentino. While the two don’t see eye-to-eye on much, and Laura can’t stifle her exasperation, you always feel the tender, though frayed bond between the two.

As Laura, Jones makes a solid straight-woman to the extravagant Felix. Technically, Laura is living out her dream as a successful Manhattan author. But she had to cut out that part of her life to make space for motherhood. Her confidence took a hit, and now Laura feels less than the woman she used to be.

Part of the reason Laura finds Dean’s behaviour suspicious is that she assumes he sees her as she sees herself: dull, washed up, and unremarkable. Laura believes that if she doesn’t feel good about the place she’s at in life right now, how can her charming and successful husband?

Meanwhile, Felix embodies the countless men who get to waltz through life to the tune of male privilege. At 39-years young the stunning-looking Laura is insecure about her sex appeal. But somehow, 70-year-old Felix behaves like the second coming of Hugh Hefner. Felix has yet to meet a woman he didn’t try to charm.

The problem here is that Felix’s actions lack consequences, which allows him to tear through life like a wrecking ball. Did his womanizing plant the seeds for Laura’s self-doubt? Of course. After all, how can a man expect to raise a confident daughter when he treats women like trophies? Although Felix’s behaviour isn’t malicious, it’s still toxic. Little by little he poisons his relationship with the only woman in the world obligated to love him.

On the Rocks goes out with a whimper rather than a bang. Considering the complicated questions the film sets up, the final resolution feels a little too neat and tidy. After the credits rolled, On the Rocks didn’t stay on my mind the same way Coppola’s other films have.

A great movie can function as a therapy session. You begin feeling a certain mood or with a rigid perspective and then leave with a new frame of mind. While highly enjoyable, On the Rock’s isn’t that profound. Think of it less like a therapy session than a drinking buddy, happy to take your mind off whatever’s bothering you for a couple hours. Sometimes that’s all we need.

On the Rocks starts screening in limited engagement in select theatres starting October 2nd, before premiering on Apple TV+ on October 23rd.