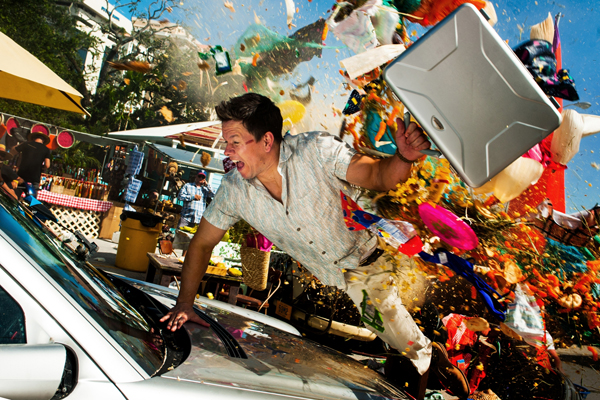 Welcome to Michael Bay’s American dream. It’s a singularly original vision of a world gone mad with the heightened personal expectations that only failed promises and marketing over saturation could bring. The world of the thoroughly batshit insane and coal black comedy Pain & Gain (which as our opening narration tells us quite grimly is “unfortunately based on a true story”) is one of dreamers who are willing to cause abject nightmares to those around them to achieve their ends, and there’s no better vulgar auteurist capable of bringing this South Florida sleaze-fest to the big screen than Bay. If this were a film that were made by the Coen brothers it would be hailed as a masterpiece, but with a rejuvenated Bay at the helm going for broke and seemingly gleeful at not making a movie involving giant robots for a change it feels just as deranged as it needs to be.

It’s 1994. Miami bodybuilding gym manager, ex-con and daily affirmation enthusiast Daniel Lugo (Mark Wahlberg) has grown sick of never having his grand ideas paying off fast enough. He uses his slickster ways to get into the good graces of boorish and reprehensible half-Jewish, half-Columbian deli magnate (Tony Shalhoub) to enact a plan where he takes over the man’s life and wealth. To help him pull this off he enlists the help of a steroidal co-worker with a predilection for large women (Anthony Mackie), a former coke-head turned Jesus freak (Dwayne Johnson) who doesn’t want harm to befall anyone around him, and a dimwitted Russian stripper who thinks they are all CIA agents.

The hook is that the man they are grifting is so hated by the community around him that no one will care if he goes missing or that he’s about to become destitute. After getting away more or less scott free, the group begins to become unravelled. They all live well beyond their means, get sloppy and desperate, and start to get tracked by a retired private eye (Ed Harris) who can barely stand his client, but whom he has great sympathy for.

Taking cues from Goodfellas, Scarface, and a bizarre world version of Miami Vice, the film bounces around with each character getting their own crack at telling their own delusional account of the events transpiring. It makes sense that Bay and writers Christopher Markus and Stephen McFeely (Captain America: The First Avenger) would crib liberally from these sources since they’re typical of the kind of lifestyle that Lugo idolizes so deeply. He’s great at what he does, but he’s too blind to see that good things come in time. He’s fed up with his current lifestyle and has adopted a point of view not that far off from a deranged social climber from a Bret Easton Ellis novel. It in many ways calls to mind the botched crime at the heart of the Coens’ Fargo, albeit with a harsher visual edge and far greater disdain for humanity. Indeed it hits many of the same story beats as Fargo (and even in its later stages, No Country for Old Men), but it’s far more pessimistic of a film with the thugs taking front and centre.Pain & Gain is not a light hearted romp, nor is it meant to be. Bay knows exactly the kind of tone he wants to convey with his work here and while a lot of it comes dripping in delightfully misanthropic malice, it’s the kind of film he was almost destined to make. The Transformers films never really gave Bay the chance to make anything all that stimulating, but his work here was prophesized by the work he put in making Bad Boys 2 and The Island. It’s the world as a terrible place where the most heroic thing one can do is be constantly in the background (especially in the cases of Johnson and Harris’ characters), and he has found the perfect material to get that point across. It’s a world of truly American psychos. Not so much Goodfellas as Douchefellas.

Bay does have a few missteps around the way. He still seems in hyperactive mode, but not in a fully detrimental way. The style brings a lot of the harsh edge that the film needs to not seem glorified. It goes so far over the top that it becomes a Grand Guginol theatre of the grotesque by the climax (involving wrongheaded runs to Home Depot, an escaped greyhound, cocaine, horse tranquilizers, and bludgeoning with weights, just to name a few things) that it’s no longer supposed to seem fun. Bay has tapped into how the entire enterprise is a paean to literally criminal stupidity. At the same time, it’s such a plot heavy story that the usually longwinded Bay still seems to have trouble wrapping his head around it at times. He just can’t keep his finger off the editing button long enough between scenes. He also can’t seem to keep straight the fact that he’s making a period piece, but that’s only briefly distracting instead of distancing.

Bay has also lucked into a perfect cast that seems to understand the material. Wahlberg plays a perfectly credible sociopath who thinks he’s earned the right to have his entire life seen like a movie. It’s easily his best performance since Boogie Nights, and not that far of a jump from that character to this one. Johnson matches that and goes above and beyond as easily the most likable and fully realized member of the trio who’s perpetually on and off the addiction wagon. It provides the film with just a little bit of warmth, reason and relatablity that the audience needs to not feel thoroughly depressed. Even when his character is at his worst, he’s rarely the reason everything has fallen to pieces. Mackie gets to have the most fun as the over the top guy that’s also arguably the brains of the operation. The only real shame is that he gets paired with a somewhat wasted Rebel Wilson as his lover and future wife. She’s good enough to deserve more screen time when held up against the numerous strippers that show up in the early going. Harris shows up late in the game, but like Johnson he brings a certain likeability that makes one wish there was more of him.

But likeability and smarts aren’t the name of the game. This is an incredibly sharp, stylish, movie about incredibly idiotic people who think they have earned something. In some ways, and this might be giving the film a bit too much credit, it feels like Bay lashing back out at his audience and critics. If they wanted him to make a serious piece of work instead of pre-packaged blockbuster, they got it, boy. It’s a down and dirty piece of vulgar Americana made by someone who loves the country to an alarming degree, but couldn’t disagree more with it’s moniker as the land of opportunity.