If you had picked the actor and director to make a kind of mid-career theme of bringing real life dramas to wide audiences, Peter Berg and Mark Wahlberg probably wouldn’t have been the first names to come to mind. Yet the duo have crafted a trio of in-their-own-way unique films that take heightened situations based on historical truth and craft something cinematically engaging. This isn’t new, of course, but there seems to be a feisty, fiery synergy between performer and director that manages to elevate these works from mere biopic or adventure films to something genuinely captivating.

Lone Survivor was their first of this  loose trinity, and in many ways it’s their weakest (yet likely commercially most successful). The situation of the lone soldier surviving an attack had moments of terrific tension, yet the story seemed needlessly inflated (swarms of faceless enemy combatants instead of focussing on the smaller number that held just as much a threat), balancing too hard on the Hollywood versus the core of the real-life narrative.

Last year’s Deepwater Horizon was a far more interesting film, taking what could easily be a dull or, worse, jingoistic take on the explosion in the gulf and instead managing to make it drip with verisimilitude as the showers of smoke and oil rained on those trying to escape the rig. It’s a magnificent film when it starts rumbling along, with fantastic technical execution that makes one feel in the heat of the inferno, yet still confident in presenting characters that one should (and does) care about.

Patriots Day takes an even more recent event, showcasing what transpired around the 2013 Boston Marathon Bombings. Once again Berg has teamed Wahlberg with an a-list supporting cast – Kevin Bacon, J.K. Simmons, Michelle Monaghan – each contributing substantially in telling the highly complex tale involving multiple locations, police forces and so on in a coherent way.

As a long time fanatic for the show Treme I was personally enamoured with two standout performances – one, by John Goodman, shows that yet again he can show up in a film and simply make everything better. Between this and his turn in 10 Cloverfield Lane the time is ripe for Goodman to actually take home a Golden trophy, even if that’s unlikely to happen this awards season. Khandi Alexander, meanwhile, may not be as well known, but she’s one of the most powerful, devastating actors I’ve ever witnessed, a Meryl Streep-level of presence who is tragically underappreciated in terms of big screen roles. Her brief appearance is as epic as her talent. 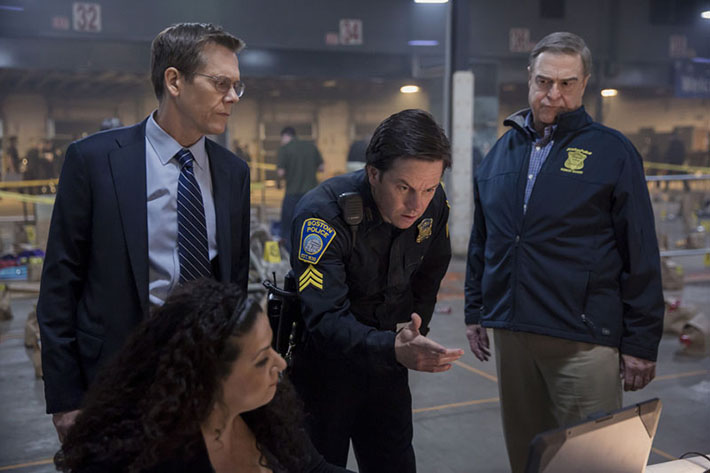 Then there’s the thankless task of portraying the killers themselves. Here the film earns its most respect, as the Tasrnaev brothers played by Themo Melikidze and Alex Wolff are absolutely riveting, managing to convey impeccably well the petulant inanity of their cause.

Yes, the film serves as an explicit memorial to those lost and a commemoration of those that survived. It’s no small thing to run into danger rather than run away, and the film manages to make the casual courageousness of the first responders genuinely impactful. Anyone who followed the news will see plenty that’s overtly telegraphed (we get it with the interlocking legs, Peter), but for those unaware these moments likely have more impact.

Yet the film does something I think even more powerful, and perhaps more harrowing. There are those that will see this as mere celebration of the ability of the city to rise to the occasion, to live up to the “Boston Strong” creed that became popularized. That surely gives some satisfaction on a superficial level, but what lies beneath is a real sense of the true insanity at the heart of the event. The Tsarnaev brothers were hardly criminal masterminds, making mistake after hubristic mistake, yet they managed to completely bring a modern city to its knees with some hardware, an incoherent ideology and a willingness to die. The discord of the response is astonishing, just as it incredible in the true sense that things played out the way they did. Some of the more preposterous moments, from a gun battle on the streets, a quick thinking escape at a gas station to a water vessel serving as the most peculiar of lifeboats, would never stand in a fictional drama. Things during those days were crazy, and Berg and co. manage to capture that all wonderfully.

The film then works best as this kind of warm testimonial to the grit of those that fought back, and a truly terrifying glimpse as to what can happen, and how very much worse it could have very easily been. It’s these moments of scope mixed with the character beats that really does elevate the picture from mere exploitation or adventure film, illustrating again Berg’s craft at taking the unwieldy and making something both for general audiences and those slightly more jaded about such delicacies.

Yes, the film sometimes goes too far (the CSI scene recreating the camera locations by memory is perhaps the most forced), as is the hybrid character that Wahlberg represents needlessly at every moment of the story beat in order to maintain the status of him as the main protagonist and conform to traditional story types. The film may have been better handing off to characters along the way, but it’s hardly a major fault and part of the realities of bringing such a work to the screen with a sufficient budget.

Still, given the comic book competition this $45 million show may not be a penny pinching indie but nor is it some overbloated studio picture. In yet another facet it’s the middle ground (without being middling). If Deepwater renewed the disaster film in spectacular ways with broad intelligence and terrific characters, so to does Patriots Day take the other 1970’s obsession, the true crime story, and ratchet it up a not.

No, this isn’t something as transcendent as, say, Fincher’s Zodiac, but it’s still plenty terrific to favourably compare it to the films of Lumet in his prime. It’s a very hard thing to do, mixing fact with fictional film while maintaining the balance between narrative and the pedantry of real life, and despite a few flaws Patriots Day manages exceedingly well to live up to what it tries to achieve. A film of great scope and great subtlety, with a message that’s for some surely comforting and for others betraying a real sense of anxiety over just how easily our Western peace can be disrupted, this timely work is one that shouldn’t be dismissed or overlooked.