Dork Shelf was out in full force for last week’s PlayStation Holiday Preview Event, where we got our hands on some of the year’s most anticipated titles. Read on for quick-hit thoughts and first impressions from our game writers Jon Ore, Eric Weiss, and Zack Kotzer from the annual Sony extravaganza.

Given the preference for square-jawed military types in most triple-A video games, Ubisoft doesn’t always get enough credit for genuine attempts at protagonist diversity. With that in mind, it’s too bad that many console gamers won’t get a chance to play Assassin’s Creed III: Liberation, a Vita exclusive, featuring a black female protagonist set in the deep south during America’s Revolutionary War.

From what little I saw, the mechanics in Liberation are on par with what the franchise has done, which is to say that the gameplay is perfectly fine. You have to learn to see the forest for the trees – finding climbable flora in the bayou is trickier than finding the windowed broadside of a church in the Vatican – but the free running picks up once you make it to the canopy. It’s strangely exhilarating to jump from branch to bough like the jagged offspring of a porcupine and a flying squirrel.

As with Assassin’s Creed III, I’m more interested in the setting than the mechanics, which is why it would be a shame if Liberation flies too far under the radar. It’s great that Assassin’s Creed III has a Native American protagonist (seriously, that’s fantastic), but we still don’t see enough strong heroines like Aveline de Grandpré and it’d be nice to see her headlining something higher profile than a spinoff on a struggling alternative platform. – Eric Weiss

Aveline is a refreshingly unfamiliar protagonist, but the mechanics of the star franchise seems to have taken a hit moving to the PlayStation Vita.

Movement was sluggish and imprecise. Jumping from branch to branch in the Bayou as Aveline, I had the same problems as when I was playing as Ezio: sometimes when you think you can just hop up onto a roof or tree, Aveline falls to her death instead.

The demo started with me following a compatriot by canoe to a hidden camp of Native American soldiers. Swiping the rear touch panel lets the player paddle either forward or back, and it worked mostly well. However I sabotaged myself by spinning 360 degrees every time I tried to navigate the winding rivers. When assaulting a camp of about a dozen warriors, they chopped me to pieces with tomahawks while I fumbled uselessly for the counter button. In retrospect, running headlong into a unit of armed fighters was my undoing.

The city-based section fared better. It was a classic Creed mission of navigating a small town area, and finding a commander in the middle of a square surrounded by guards, and in this case a cannon or two. Everything went about as well as you’d expect – I traipsed around the building roofs, dispatched a few hapless guards, and fell a about two stories down onto the target.

Hopefully Ubisoft will be able to tighten the controls before its final release. But so far, Liberation has me more interested in Aveline (and the weird Boogie Nights-coloured loading screen) than playing a pared down, looser version of the console game. – Jonathan Ore 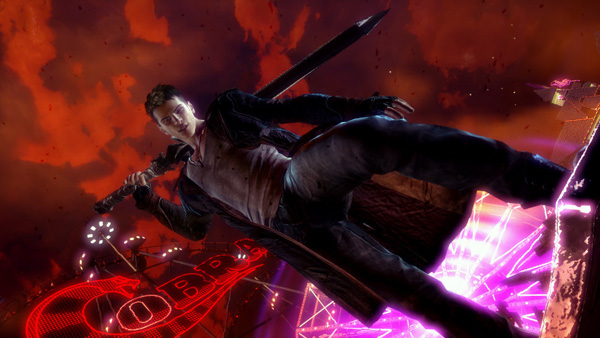 The next Devil May Cry game looks fine. In fact, it looks a hell of a lot like every other Devil May Cry game, so can we please stop bitching about Dante’s makeover? Ninja Theory’s Dante looks and acts like a younger version of Capcom’s Dante, which is appropriate considering that the game is a prequel (ed. note: a reboot-prequel!). If you believe in character development – or, you know, aging – then you have to allow the new Dante to mature into the old one. That’s kind of how this stuff works.

I’m not saying DmC will get everything right – I reserve final judgment until I play it – but its mere existence is not a crime against humanity. Dante has dark hair. Get over it. – EW

Despite traipsing around the themes of the series since its inception, the concept of duality permeates the design of DmC: Devil May Cry. Dante’s powers, other than his usual sword and dual pistols, are separated into what I’m going to assume are categorized as Angelic and Demonic –  the left triggers for the former, the right for the latter. Both are used in tandem to navigate and lay waste to your typically bizarre shambling hosts of enemies.

In the heat of battle, Dante can switch between weapons on the fly by holding the trigger buttons. L2 whips out a scythe to catch agile enemies, while R2 pulls out a gigantic axe to shatter armoured foes. The meat of battle is more or less the same as it always was: stylish and tightly controlled. The camera remained free, ditching the atrocious fixed angles that ruined my enjoyment of DMC 4.

The sense of duality is in the level design as well. The European-inspired décor can be manipulated by both Dante and whatever forces work against him. A red marker allows you to pull out sections of the wall with your “Demonic hook”; afterwards you can use your “Angelic lift” to pull yourself up to the platform like a grappling hook.

Later in the level, the buildings on either side of the wall slide closer, making the street heave into uneven chunks. Later, a gigantic cathedral floor breaks apart, creating gigantic chasms which you’ll have to jump and air-dash across. In both instances the camera shifts along with the movement of the terrain, leaving you disoriented with its heaving and uneven angles.

Series veterans would do well to check their skepticism at the door. Ninja Theory appears well on its way to finishing a stylish devil of a game. – JO

The first Devil May Cry took the horror-ish action of other Capcom staples and removed a lot of the bullshit. But then the series took on its own coat of bullshit: an over-indulgent story, self-absorbed cut scenes and all that was cool circa 2001 made Dante look more like one of the people Cypher unplugged in The Matrix. I put down the controller when Dante skated across a floor on a guitar, shooting demons while eating pizza like he’s auditioning to be a Ninja Turtle. That was how the third game began.

DMC is the cure for that. Dante is now younger, and he looks it: a juvenile face and jet-black hair that doesn’t sink past his ears (I guess he was an early greyer). The gameplay isn’t really revolutionized. The moves are different, but the combination of slashing and shooting should feel cozy. The only major adjustment has to do with mechanics juggling “light” and “dark” powers, held by the shoulder buttons.

Sorry, haters. Everything about DMC feels like, at the very least, a step in the right direction. The good of the gameplay is untouched, and the cosmetics feel vastly original and shed of clichés, compared to where it’s come from. Gone is the over-angelic imagery; in is this glitchy, art-installation assault on the streets of an Eastern Europane-inspired limbo. The theatrics are also integrated into the gameplay, instead of asking gamers to sit on their hands while Dante performs stunts too amazing for them to control. – Zack Kotzer

Sony’s console has become the house of oddball games and downright experiments, and The Unfinished Swan is one floating in from the horizon with some obvious push. Maybe because it’s such an uncanny tangent for gaming experiences, maybe because it uses the Move. Either way, The Unfinished Swan is turning heads, and it should entertain as long as players know what they’re picking up.

The Unfinished Swan is about a boy inheriting an unfinished collection of unfinished art. You play within the world of the paintings, narrated in a light-hearted, storybook rhetoric of kings and critters. The world, however, is a blank slate, white as snow with dabs of golden objects for the sparse reference points donated to you. The only power you have to navigate the whiteout are globs of black paint, which cover any surface and reveals the path ahead of you.

The game is a sensation of walking blind, and swabbing the environment to see is a quirky mechanic. In the version I played, there seemed to be mild hints of puzzles, but I can’t promise anything. If there are puzzles, more than just finding your way in a strange space, The Unfinished Swan should be interesting. If it there aren’t, it may only stay endearing to younger children, who can also be duped into the a similar effect via blindfold. – ZK

The most surprising moment took place down by the river.

I was flinging black bulbs of paint with the PlayStation Move wand, and after throwing one particular globule, I suddenly found myself staring face-to-face with a frog that took up most of the screen. Some objects (like this frog) take paint sparingly, so I was able to see its body, stripes and oblivious eyes. It shocked and delighted me.

The rest of the landscape comes into its own as you cover it in paint, but be careful not to douse it entirely, otherwise you’ll find a mostly blank black screen instead of a blank white one. It plays with a fundamental video game sense of exploration and discovery, reining in your impulse to splatter paint everywhere like an episode of Wipeout.

It’s completely illogical, but imbued with imagination and the creativity of childhood and dreams. I’ve no idea how long of a game it is or what twists await the protagonist Munroe, but I can’t wait to see what developer Giant Sparrow has in store. – JO