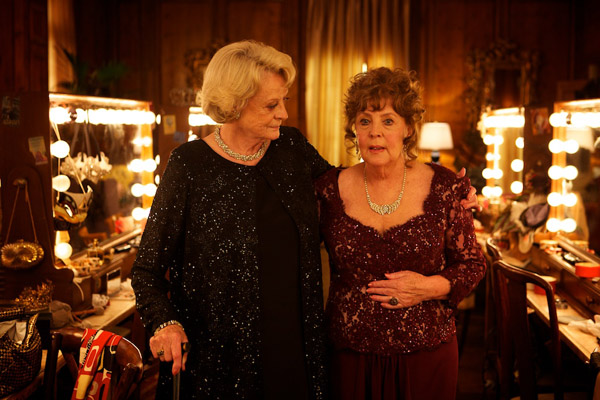 Early on in 2012, predominantly older audiences flocked to an ensemble drama about retirees heading to India for one last hurrah and an escape from their humdrum British lives. While The Best Exotic Marigold Hotel was a sleeper hit, it was also a borderline racist, soullessly pandering, manipulative, unfunny mess that somehow inexplicably became lauded simply because it has a competent cast. It’s a movie that I’m still furious over to this very day whenever it’s brought up, but it makes me appreciate a film like Dustin Hoffman’s delightful retirement drama Quartet even more in its wake.

Sharing a cast member in the always great Maggie Smith as a literal opera diva begrudgingly forced into a retirement community exclusively marked for trained classical musicians of all sorts, Quartet is a straightforward ensemble comedy about growing old not so gracefully that isn’t afraid to make its characters look like buffoons when they have to. It’s a delicate comedy that has enough old timey charm and grace to appeal to older audiences, while stuffed with enough genuine belly laughs to appeal to almost anyone looking for something light amid the dour and serious slate of this January’s releases.

For what’s quite astoundingly his feature directorial debut following almost a lifetime in front of the camera, Hoffman weaves a tale about how said retirement home has fallen on harder times than usual. The enclave blowhard and head-retiree-in-chage (Michael Gambon) has been trying to pull together an important charity event to raise enough money to keep the tight knit and catty community in fine working order. After the headliner of the event falls though, he sets wheels in motion to bring together one of the most notable quartets of singers in opera history to remount their much lauded performance of Verdi’s Rigoletto on the famed composer’s birthday.

All four of them, however, are at vastly different stages of old age. The amorous Wilf (Billy Connolly) has suffered a stroke that leaves him without a mental filter and often devoid of manners to go hand in hand with his already massive ego. The well intentioned Sissy (Pauline Collins) still walks the grounds with a discman in hand and a song in her heart, but her dementia is becoming unmanageable. Reggie (Tom Courtenay) has fallen into teaching visiting students, and has been the best adjusted of the bunch until Smith’s Jean Horton arrives. Once married and then divorced unceremoniously so she could follow her own skyrocketing career, Reggie gets one final chance to face his regrets at a time when he should be living without them.

Aside from some smart dialogue and a supporting cast of actual musicians in the background to compensate from the leads’ lack of skill in that department, Hoffman delivers a consistently funny and unpretentious comedy about pretentious people. He does a fine job taking the script from Ronald Harwood (adapting his own play) and making casual audiences who couldn’t care less about opera as a medium care enough about these characters to laugh with them and not at them. He has a knack for directing comedy, and it would be nice to watch him return to the genre as a director sooner rather than later.

His cast also nails all of the script’s high notes wonderfully. While it’s not too much of a stretch for Smith to play a stand-offish, egotist who expects no help from anyone when she truly needs it, she imbues Jean with a lovely sense of humanity that makes her seem reasonable rather than shrill. Courtenay does a fine job as his counterpart and his take on a man suddenly feeling hangdog and heartbroken anew feels natural and unforced. Collins takes a character that could have easily been caricature, and instead creates a sweetheart that can be rooted for without feeling sorry for her while genuinely worrying about her overall wellbeing.

As for Connolly, he kinds of steals the show with his riotously over the top comedic relief. He’s an old school good time boy still in search of hedonistic pleasure, but he still has the capacity to care for his friends in need. If the retirement home was a college campus he would be the character constantly running afoul of Gambon’s scheming Dean of Students. The only problem with Connolly is that his character feels like it’s had the most chopped from it along the way and he’s become relegated to the background. His interactions with Gambon and with a somewhat underused Sheridan Smith as the head doctor feel like subplots that got trifled with along the way.

It’s of little matter though, considering that the closer to the fundraiser the movie gets the more strained it begins to feel. Quartet seems like an unlikely movie to talk highly of here, but it’s a lot more genuine than most comedies, and a lot funnier than anything else out at the moment that’s actively billed as such. It certainly isn’t a swan song for any of the players involved, but it’s a solid performance piece from four (five if you count Hoffman) great talents making lovely music together.