Todd based Slasherman on an unsolved killing spree that happened decades ago. When the movie begins, Todd is in a creative slump as he struggles to write the perfect ending for his Slasherman run. Unfortunately, he’s about to discover a treasure trove of new material.

Suddenly the harmless fiction in the pages of Slasherman becomes all too real, forcing Todd and the audience to consider the morality of glorifying violence.

Random Acts of Violence is a brutal slasher flick guaranteed to make the audience squirm. The film’s co-writer and director, Jay Baruchel, wants to do more than give viewers nightmares; he dares you to engage in a critical conversation about art, violence, and accountability.

Baruchel is best known for raunchy comedies like This Is the End and Dreamworks’ family-friendly How to Train Your Dragon series, but this attentive young filmmaker has deep roots in the horror genre.

Baruchel spent his teens obsessing over articles in Fangoria and filming zombie flicks in his friends’ houses. Yeah, he was that guy. So it makes sense that he and the film’s co-writer Jesse Chabot have been polishing their horror script for nearly a decade. Random Acts of Violence is the ultimate passion project, and every bit of the duo’s love and consideration comes through in each frame of the film.

That Shelf caught up with Baruchel to discuss his intriguing new movie. Our conversation covers ways to freak out audiences, artistic liability, and Baruchel’s out-of-control DVD collection. 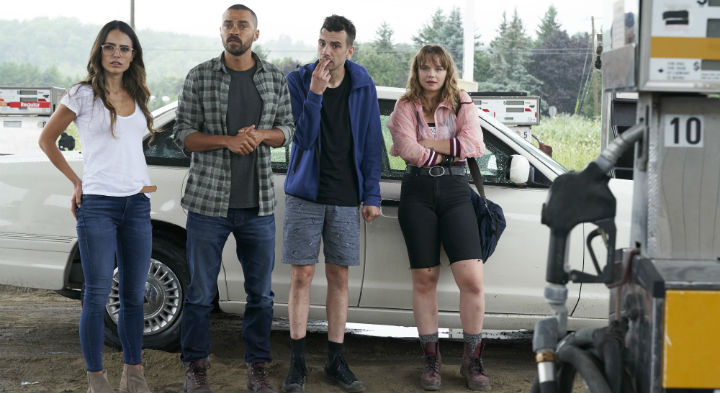 Victor Stiff – Great work on the film. I really enjoyed the statement you were making. I’m sure I could talk to you all day about it. So I’m just going to fire off a few questions and see where we get to.

Random Acts of Violence beings in my beautiful hometown of Toronto, and then the characters start heading south to New York. You really make a point of emphasizing how far away they’re getting from home. Can you talk about the decision to highlight this?

Jay Baruchel – Yeah, a movie will always have a bunch of different kind of vibes, there’s the main theme, and everything works backwards from that. But there are other kinds of things you can insert. And one thing that I thought lent itself to this story was basically a nightmare road-trip of Canadians going to the States.

It’s something that I have felt very viscerally every time I’ve driven across that border. It’s not like I met a fucking serial killer every time, but every time I crossed, I definitely noticed a massive difference; infrastructure in disrepair, sharpened elbows and shoulders, and the spectre of concealed weapons and all these different sorts of things.

There’s a sense of, a degree of danger or anxiety. You look the other way, to a degree on it, but every time I’ve gone to the States, it’s been there. I hadn’t really seen that sentiment in a movie, and I thought that given the road trip and where they were going, it seemed to me that if you work in comics up here and you go down to New York Comic Con, you’re probably going to drive down and you might make a trip out of it with your friends. So it was just my attempt to articulate that feeling we all feel when we cross that border.

VS – That’s something I’ve definitely felt. And I didn’t even put words to it until I saw it in your film. I thought, “Yeah, I can relate to that. That’s exactly what it is.”

JB – Oh, that’s great. That’s a great question, man. And it’s something that I’ve thought about. My friend George Tchortov, who choreographed all the fights, all the kills in our movie and one of my best friends in the world; a very talented actor and a very successful stunt coordinator and a fight choreographer, and veteran stuntman as well. He and I, we’re both big movie nerds and we hang out all the time and get into these fucking discussions. Some of them get a bit more macro than others, and one of the really good ones we got into is about violence, cinematic violence, and what fight scenes and what kills left us kind of lacking and which ones landed on us.

We realized that to us, the key was the ones that were the most effective are the ones that buried the choreography and buried the narrative of the sequence as best as they could. We were working off this idea that, if you’ve ever been out and about when a car accident happens, or a bar fight breaks out, part of the whole thing is that all the rest of us are playing catch up.

It’s like there’s this music we all operate to, which is the music of society, of the social contract. I walk at a certain pace and I’ll let you go before me, I’ll hold the door and I’ll pay my taxes and blah, blah, blah. And there’s a music to it. There’s a rhythm, whether we notice it or not, there’s a rhythm. And these events, these violent events happen and it robs us of the music.

Now it’s operating at a meter that we can’t discern, and we have no idea how long or short it’s going to be. And if you’ve ever watched any movies, when a fight scene, when a car chase, when a kill starts to happen, when you feel the commencement of a sequence, you can reasonably deduce, subconsciously even, oh, this is going to be the next four minutes or so of my life. And you have a sense that the killer is in the house, the girl is upstairs… okay, he’s going to get up there, he’s going to kill her, and then that sequence will be over. You can kind of see an ending, and that is not scary.

So we wanted shit to be clumsy, dirty, small, and at turns ugly and embarrassing. We wanted it to be all the things that would actually be as close to that as we could get to. And so it’s like, how do you make a heavy record in 2020, right? It’s not necessarily just turning the distortion up. You know, there’s a lot of folk records that are probably heavier than a lot of metal records now because they had to figure out what heavy means now.

So it’s about trying to figure out what harsh and violent means now in an era where you’ve been so desensitized. And so it’s also about robbing the moments of fun as well. Make sure that nobody can be like, “Aw, man, that was awesome,” and high-five, the dude next to him. No, we want, if the guy’s gonna talk to the dude next to him, we want him to be like, “Oh fuck, this is horrible.” That was what we were going for.

VS – I’m sure everyone’s going to ask you about the role the artist plays in how people interpret violent work. Instead, I’m curious about when did you start thinking about the morality of violent art? At what point in your life did that start to register with you?

JB – Yeah, that’s a really good question. So, I was in grade 11 when Columbine happened, and the debate, if you can call it that, was a terribly facile one. You had people saying Doom and the Antichrist Superstar made kids shoot up a high school, which is fucking absolutely absurd. But then I would argue equally absurd is the concept that none of us had any responsibility for what we put into the world. I think that’s equally absurd.

I think that if that weren’t true, they wouldn’t allow us to vote behind the curtain. If you keep your opinion to yourself, that’s that. But once you put something out there, you are connected to it. There’s a degree of responsibility, whether you admit that or not.

So this is all to say that as a horror movie fan in high school in that particular era, I was very defiantly like, “Yeah, anybody can do whatever they want and that’s right.” And I do believe that, but I also think that there are strings attached to whatever we do. I think that in developing this script, we first started at 26, 27, something like that, and our intellects were commensurate with our age. And we grew up man, and Jesse and I lived together a long time. And so we grew up alongside each other and known each other since high school. But we, we started taking issue with the same things and learning and evolving on similar things.

We started having amongst ourselves internally, a debate about the morality of film violence as it pertains to this specific script. And then this lightbulb went off, and we’re like, “Oh, that is the subject matter of our fucking script.” It was always there; it just took us years to grow up enough to see it.

VS – Last question for you. My outlet is called That Shelf. We’re all about discussing people’s obsessions and their nerdy passions. If I was to come over to your place, what prized possession on your shelf would you be proud to show off?

JB – Oh god man, this place is a fucking… this place is just like a clearinghouse for a bunch of my bullshit. My wife has done great work to improve the quality of life here and has moved all of my shit to the basement pretty much, but it would either be; I am suffocated by a DVD collection that I started like 20 fucking years ago. So they’re all upfront and centre.

But I think the thing you’re asking, it would probably be, I have a crippling addiction to collecting military antiques, and sometimes the wife indulges me. Right now, the coolest thing is, she found for my birthday a hand-painted sign for an RCAF mobile recruiting unit, “Information this way,” sign from World War II. It’s what would have been in front of the church when we were trying to get guys to join the air force.

VS – That sounds pretty dope.

JB – Yeah, it’s fucking awesome. It’s hand-painted, and it’s beautifully intact. And yeah, that would probably be the one.

VS – Awesome. Thanks so much, man. I enjoyed your film. I hope people get to have some great discussions about it. It’s a really thoughtful movie.

JB – Thank you, that’s really kind of you, man. I really sincerely appreciate that. Thank you.

This conversation has been edited and condensed for clarity.