Last night I dreamt I went to Manderley again, but no, it wasn’t the Alfred Hitchcock masterpiece. It was the bland and uninspired Netflix adaptation starring tall, blond, and useless Armie Hammer.

I had high hopes for this new Rebecca. I love Daphne du Maurier’s Gothic romance and, even though Hitchcock’s 1940 Best Picture winner is one of my favourite films, I had an open mind and an appreciation for Ben Wheatley to work with here. After all, how could they screw up the tale of a wealthy widower who sweeps his new bride off her feet, whisking her away to a mansion high on an English cliffside rife with ghosts of the past and a vile housekeeper? Especially when du Maurier and Hitchcock have created such beautiful blueprints to follow. Alas…

My confidence in this adaptation began to wane when the trailer was first released. Some anticipation remained and I still hoped to watch Lily James and Hammer smoulder on screen together because, at the very least, they make for a very attractive couple. Unfortunately, all James and Hammer manage is to look good together. Strangely even that doesn’t help at all because someone decided to dress Hammer’s Maxim de Winter in an ungodly mustard yellow suit for the first half of the film. It’s hard to focus on any kind of chemistry when faced with that monstrosity. And it doesn’t get much better. 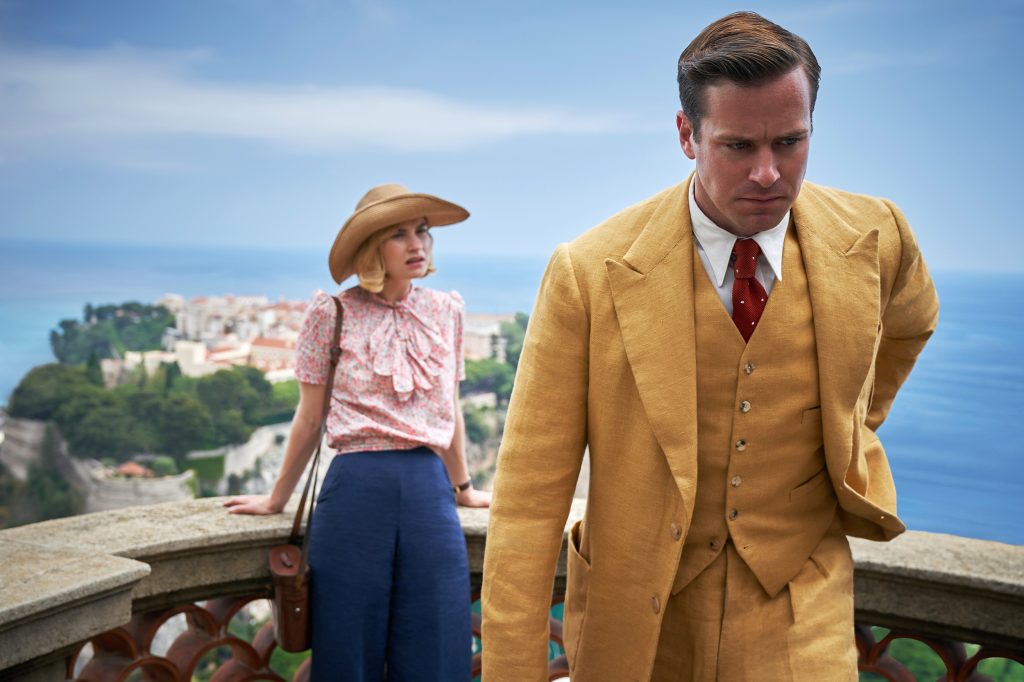 Though Rebecca is not the garbage fire it was predicted to be, it’s certainly not great either. The marketing leading up to the film was very clear that this Rebecca was not a remake of the Hitchcock version but a new adaptation of the 1938 source material. There will be viewers who come to Wheatley’s version having not seen the original film, but even those viewers who approach the story with new eyes won’t find much to reward them.

One of the biggest hurdles of Rebecca is Hammer, who doesn’t pack the charm or presence necessary to pull off Max’s abrupt personality about-face when the newlyweds arrive at Manderley. There’s no doubt Hammer is a good looking man, but it seems no one told him he had to do anything other than stand around and be handsome. From the first frame of the film it is devastatingly clear he is no Laurence Olivier (okay, but who is?) and James—try as hard as she might—is no Joan Fontaine. They go through all the motions of a melodramatic and passionate love affair, but they fail to breathe any life into their limp romance. But James does appear to try, unlike Hammer. She shines in the French Riviera scenes in the film’s first act, making it hard not to root for her. She is absolutely likeable and believable in the role as the young bride as a whole, but when acting opposite the wet blanket that is Hammer’s on-screen presence, she’s sadly left to flounder.

With most of the story focussed on the newlyweds, there’s little room to note other characters besides the ghost of first wife Rebecca. Ann Dowd as the petty Mrs. Van Hopper is but a caricature of cruelty compared to Kristin Scott Thomas’s turn as Mrs. Danvers, the head of household and the true villain of the story. Thomas is a highlight of this Rebecca—her sinister and conniving Danvers a delight to behold. A twisted sneer turns into a fox-like grin with ease for the actress whose best scenes come opposite the new and meek Mrs. de Winter (James). These moments truly shine when the underlying horror of the story rears its head.

Wheatley has again and again shown audiences his unique viewpoint and excelled at tackling dark themes in Free Fire, Sightseers, High Rise and Kill List. There are glimpses of Wheatley here and there, but they are too few and far between. For a director whose touch and style permeates his work, there’s hardly any traces of him here outside of the opening moments and a few more expressionistic turns during the Manderley ball that feel wildly out of place when compared to the rest of the film.

Despite its shortcomings, Wheatley’s vision is at least beautiful to look at. Manderley is exquisite and imposing and—for all the money the costume department must have saved by making Hammer wear those hideous mustard pants over and over—they did their female cast justice with of-the-era costumes that wouldn’t look out of place on the streets of London today.

Rebecca is now streaming on Netflix.