Since its Telluride festival premiere last month and limited New York and L.A. release last week, much has already been written about Steve Jobs, the latest in a string a films to tackle the Apple co-founder’s legacy, but the conversation has just begun. This is a film that people will be talking about for years to come. The marriage of Aaron Sorkin’s snappy words and Danny Boyle’s kinetic images is like crack for movie lovers. Steve Jobs is two hours of people talking, and it might be the most thrilling thing to hit screens all year.

Most of the conversation around the film thus far has been about its accuracy – or lack thereof – which is an inevitable but ultimately trivial argument. Steve Wozniak (portrayed by Seth Rogen in the film) put it best in a recent interview when he said “the movie is not about reality, it’s about personalities.” People expecting Sorkin to tackle this subject matter the same way he did 2010’s The Social Network will be surprised but not disappointed. Steve Jobs imagines what was happening backstage behind three major product launches: the Apple Lisa in 1984, the NeXT computer in 1988, and the iMac in 1998. The products and events they talk about are based on facts, but the interactions are purely fictional. 2013’s Jobs proved that straight-up biopics often feel tired and contrived, here Sorkin has found an innovative way to approach the material, and hits it out of the park with a script that’s more Birdman than The Social Network.

In every act, Jobs exchanges words with Wozniak, his right-hand woman Joanna Hoffman (Kate Winslet), Apple hardware wiz Andy Hertzfeld (Michael Stuhlberg), Apple CEO John Scully (Jeff Daniels), ex-girlfriend Chrisann Brennan (Katherine Waterston) and their daughter Lisa (played by three different actresses). The idea that everything would get laid out on the table with all these different people in his life directly before every major product launch is kind of absurd. This is the last place he’d want to see his ex and he certainly had the means to keep her away. Someone going into this film thinking it’s meant to be a straight up dramatization of true events could easily be confused or put off by the liberties it takes.

It’s best to approach this film as Sorkin’s take on Charles Dickens’ A Christmas Carol. Jobs is clearly a Scrooge character, oblivious to how his business-oriented tunnel vision hurts those around him until it’s almost too late. Every time he’s about to present his work to the world, ghosts from his past come to remind him of the true cost of innovation. This could all be interpreted as an internalized hell for Jobs, forced to face all of his personal demons before every critical moment of his career. Each act ends with Jobs taking the stage, we all know what happens next, but this film imagines what could have been happening behind closed doors, creating an almost Kaufman-esque fusion of fact and fiction. 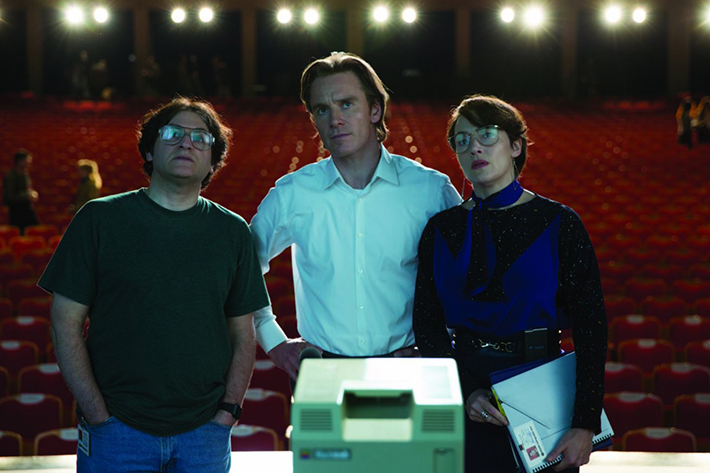 The Jobs character himself exclaims in the film’s third act “It’s like 5 minutes before every product launch everyone goes to a bar, gets drunk and tells me what they really think of me.” Here Sorkin is acknowledging what could have potentially been the biggest the criticism of the film, disarming us of this observation by making it himself. Despite being jam packed with clever rapid-fire dialogue, some of the dialogue is a little on the nose, which is difficult to avoid when you’re trying to pack so much information into these scenes. People don’t normally come right out and say what they’re thinking, but in this case Sorkin needed them to. Many scenes basically end up breaking down thusly:

Jobs: I’m too busy changing the world to be nice.

*Jobs does or says something to humanize him.*

The characters don’t really seem to grow over the years, but perhaps that’s the point. The technology advances, Jobs gets fired from Apple then re-hired, but the relationships seem to remain stagnant. It was a wise choice to not mire the actors in makeup in an attempt to age them over the years or make them look more like their real-life counterparts. This is a mistake many films based on true events make (Foxcatcher and Black Mass come to mind) and contrary to popular belief, usually hurts performances more than it helps them. Hairstyles and clothes change with the times, but apart from that, actors are left to their own devices to create these characters, and there isn’t a single weak link in the cast.

Steve Jobs is essentially a chamber play about a modern mythological figure. Boyle pulls out every trick in his bag to make this talking heads piece as cinematic as possible, and the fruits of his labour are in every frame. Much like the titular character, everyone here is shooting for the stars (aka Oscars), and if Kutcher’s Jobs was the Apple Lisa, then Steve Jobs is the iPhone.