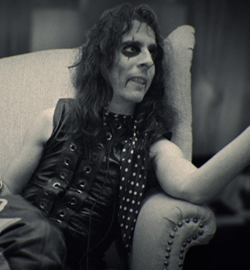 We sit down with heavy metal anthropologist Sam Dunn and filmmaker Reginald Harkema to talk about their work on the "doc opera" Super Duper Alice Cooper, which hits DVD tomorrow.
Super Duper Alice Cooper Special Presentations/Hot Docs Live Special Event Teaming Monkey Warfare director Reginald Harkema with rock doc royalty Sam Dunn and Scot McFayden (Metal: A Head Bangers Journey, Metal Evolution), this supposed first ever “rock doc” takes archival footage and sound bites to tell the story of Detroit born Vincent Furnier and his […]
The Measure of All Things The rarest ticket of the festival is this one night/one show only of Academy Award nominated filmmaker Sam Green’s live directed, conducted, narrated, and mixed documentary inspired by The Guinness Book of Records. With a soundtrack from The Quavers, the film blends traditional storytelling with performance for what’s sure to […]
How long would you wait for your big break? And if you knew it would never come unless you took drastic measures like, say, becoming a vampire, would you? Do sex and drugs really make rock ‘n roll? According to Rob Stefaniuk’s tongue-in-cheek film, rock music is nothing without some kind of drug or in […]