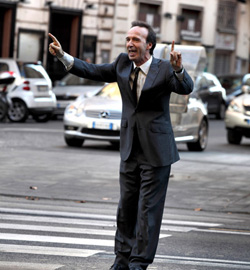 After a promising but problematic pilot, the second episode of Aaron Sorkin's The Newsroom should have brought things together and smoothed out some of the rough edges. Instead, it's very clear that the series is still struggling to find its feet. Worse, it almost squandered what interest we had in the series by repeating itself in just the second episode.

After a notable 5-year absence from television, made even more notable by a well-deserved Academy Award win for The Social Network screenplay, Aaron Sorkin returns this Sunday to HBO with his new show The Newsroom. Ian MacIntyre previews the first three episodes of Sorkin's fast-paced and highly political new TV series.

Dork Shelf talks to another Goon cast member, Toronto native Alison Pill, about what to look for when choosing a love interest role, working with Seann William Scott and Jay Baruchel, and her fear of improv.
Fantasia 2010 Review Last night I dared to say on Twitter that, after seeing Scott Pilgrim vs. The World, director Edgar Wright is on his way to gaining status as an auteur. This sparked a lively debate among friends on whether this was true, or even what the definition is of an auteur. To my […]